April 1, 2021 |   By the Minghui correspondent station in New Zealand

(Minghui.org) The 99th Kumeu A&P Show was held in Auckland on March 27, 2021. This is the biggest agricultural show on New Zealand’s North Island with more than 500 booths, carnival rides, equestrian competitions, exhibitions, performances, and live concerts. Each year the event attracts thousands of people and brings a lot of fun to the community.

The Tian Guo Marching Band was invited to perform in front of the main stage. Falun Gong practitioners introduced the spiritual practice to people at the show. Many people learned about Falun Gong from the practitioners’ booth. 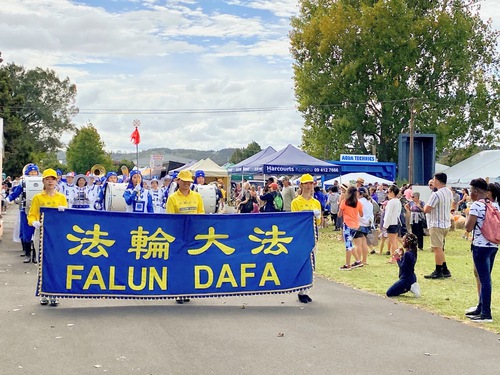 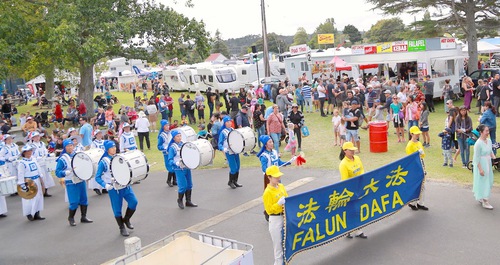 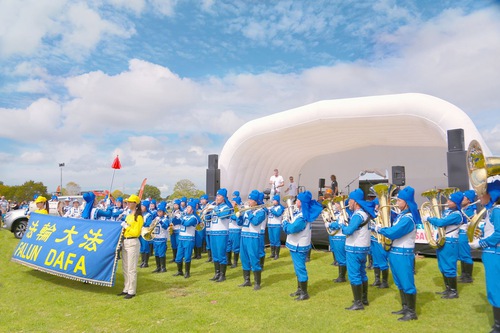 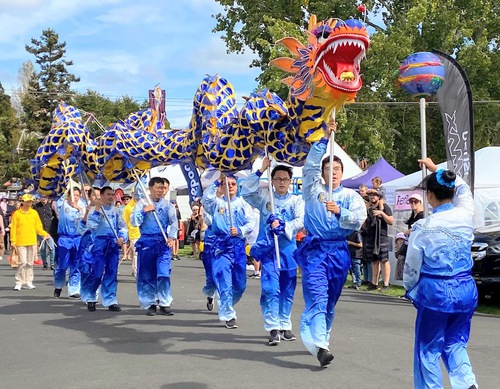 Dragon dance team in the parade 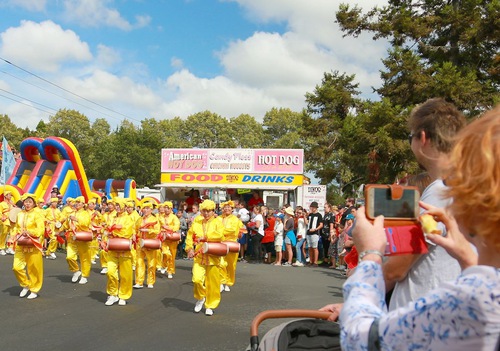 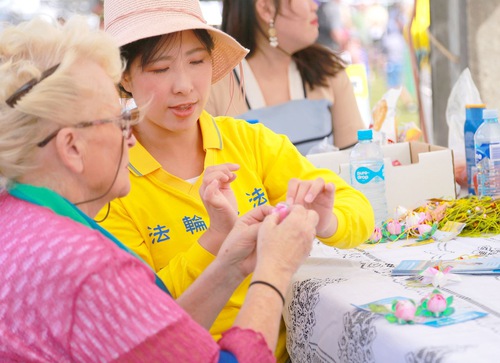 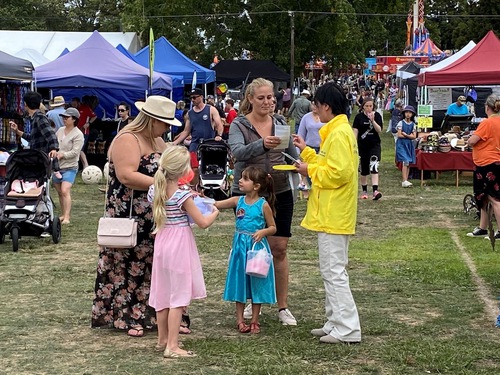 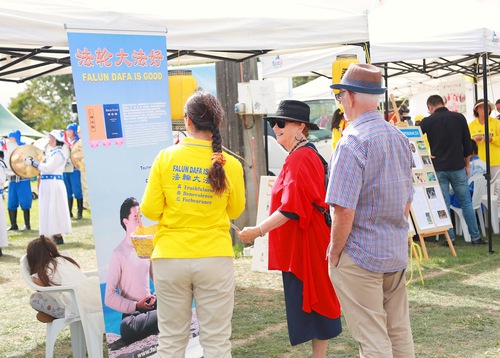 Introducing Falun Gong to the public at the event 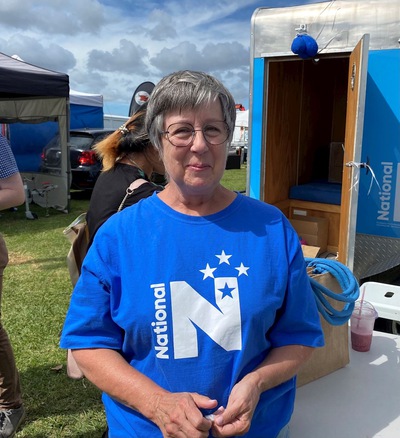 Cheryl Morovic is a staff member of the New Zealand National Party. She said, “Falun Gong practitioners are brave to stand up for their faith. I see they come to the Kumeu A&P Show every year. I admire their perseverance.”

She said the practitioners have continued their efforts to clarify the truth, and she appreciates Falun Gong’s principles of Truthfulness-Compassion-Forbearance, as these principles are beneficial for society as a whole. She knows that Falun Gong practitioners in China face persecution at the hands of the Chinese Communist Party.

She said she hopes that practitioners continue their efforts to help everyone understand the truth about what has been happening in China. She said participating in the show is a good way to reach people who don’t know about the persecution faced by practitioners in China and to give people a chance to support Falun Gong.

The New Zealand Government Should Ban Trade with China 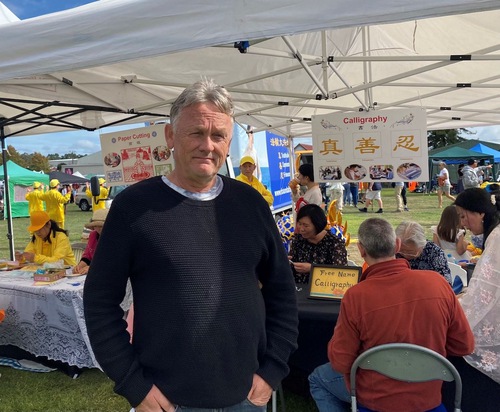 Graeme works in finance for a foreign trade company in New Zealand, which does a lot of business dealings with China. He said, “The New Zealand Government should ban trade with the CCP. The CCP persecutes Falun Gong, locks them in concentration camps for labor, and harvests their organs for profit.

“This is very inhumane. The New Zealand Government should strictly prohibit New Zealanders from going to China for organ transplant operations.”

Graeme said that the CCP does not have a trace of humanity. In the eyes of the CCP, people are worthless. History has shown that communist regimes or socialism eventually lead to disasters, causing many people to lose their lives. Intimidating people is these regimes’ way of maintaining power.

He pointed out that the CCP regime is a vampire and a totalitarian system. Karl Marx first used the poor and disadvantaged groups to overthrow the government and then suppressed them in turn. This is the so-called ‘iron fist’ policy. The CCP is evil. It uses money to bribe governments of various countries and then blackmails them. It is very corrupt.

He pointed out that if one wants to find the truth, it actually is there. But if someone grows up under such a system from an early age, it’s difficult to recognize the truth. People have been brainwashed since they were little children.

Max is a company owner. He and his girlfriend Cami said they were happy to see the dragon dance and the waist drum performance. Max said that the colors of the costumes were brilliant and allowed people to see the different cultures and lifestyles.

After learning that Falun Gong is a meditation practice, both Max and Cami were interested and wished to learn more. Max was surprised to hear about the CCP’s persecution of Falun Gong. “I am very indignant at the CCP’s treatment of Falun Gong practitioners. Harvesting their organs to sell across the world is too brutal.

“But some people don’t wish to learn more. Many mainstream media only tell us what they want us to know. The media is controlled by a small number of people and is full of lies, especially about the current pandemic. I wish people would wake up and not wait until it’s too late. I hope you continue your efforts to raise awareness.” 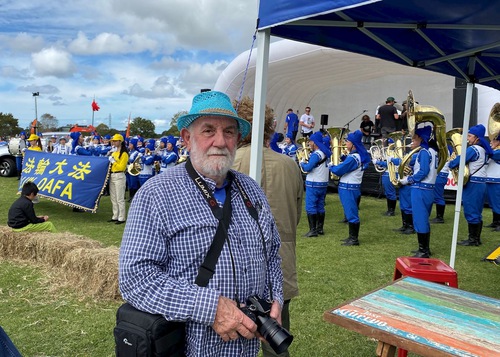 “I like their music very much,” he said with tears in his eyes. “Different instruments form the melodious music, letting people feel peace and harmony.”

Robert said that Falun Gong practitioners have pure hearts that reflect on their faces.

A Chinese man with the surname Mao said he has resided in New Zealand for five years. He joined the CCP more than 20 years ago. He said, “I quit my membership in the Party in 2005. We are all very clear on what the CCP has done. The CCP covered up the pandemic everywhere. I thought there definitely was something fishy about it all; why would the CCP cover things up if there was not something fishy going on? Just because I said this, my WeChat [Chinese social media] account was blocked.”

He said, “The CCP’s whole history is full of lies. Not many in China are clear-minded. Many Chinese people do not know what patriotism is. What they say about patriotism is actually about loving the Party and loving the regime, but that’s not patriotism. The CCP squanders the wealth of the people and infringes on their interests. Falun Gong promotes Truthfulness-Compassion-Forbearance. This is surely right.”