March 8, 2021 |   By a Minghui correspondent in Yunnan Province, China

(Minghui.org) The authorities in Mengzi City, Yunnan Province, arrested Ms. Liu Yan for the possession of Falun Gong materials on July 3, 2010. The local court sentenced her to 10 years in prison per the persecution policy against Falun Gong, even though no law in China criminalizes the mind-body practice.

Ms. Liu was released on July 3, 2020, only to realize that she had been fired from her job and lost her 22 years of seniority as a public servant. Consequently she was stripped of her employer-sponsored pension and lost her social security and medical insurance. Instead of retiring comfortably, Ms. Liu is now in financial despair.

Falun Gong, also known as Falun Dafa, is a spiritual belief and meditation practice that teaches Truthfulness, Compassion, and Forbearance. The Chinese Communist Party launched the persecution of Falun Gong in July 1999. Ms. Liu had been arrested three times and spent two years in a forced labor camp before her latest arrest in 2010.

Ms. Liu, 56, has a bachelor’s degree in electrical engineering from Kunming University of Science and Technology. She began working at the Honghe Water Resources Bureau in 1988 and later became a certified electrical engineer and a public servant. She was quickly promoted to deputy chief of the electric power division. She was in charge of making annual statistical reports on the electric power and every year the provincial officials commended the quality of her reports.

Her husband’s coworker visited them in 1996 and brought them a copy of Zhuan Falun, the main book of Falun Gong. The first time she read it, she was determined to practice. She followed the teachings in her everyday life and got along great with her family and coworkers. She felt great, too, physically and mentally.

Agents from the local domestic security office and the 610 Office arrested Ms. Liu, her husband, and several other Falun Gong practitioners on July 3, 2010. The authorities ransacked her home and confiscated much of her property, enough to fill a few police vehicles. The 12,000 yuan in cash the couple had set aside to pay their daughter’s college tuition was also taken. Due to her husband’s persistence, he managed to get the cash returned a month later so that their daughter could continue to go to school. The confiscated property included her electric car, computers, laptops, and Falun Gong books and fliers.

Ms. Liu was sentenced to ten years by the Honghe Prefecture Intermediate Court in March 2011. She appealed the verdict but was turned down by the Yunnan Provincial High Court.

For the first two years in Yunnan Province No. 2 Women's Prison, Ms. Liu was forced to sit still on a small stool every day from 7 a.m. to 10 p.m. There were dozens of bumps on the stool, which eventually caused the flesh on her buttocks to rupture and fester. The posture put extreme pressure on her body and her heartbeat became dangerously high. This did not stop the guards from torturing her. When they tried to get her to take medicine for the wounds, she refused. The guards assigned two prisoners to watch her around the clock. They limited her time to use the toilet, purchase necessities, and clean herself up. She was not allowed to make calls or have family visits. 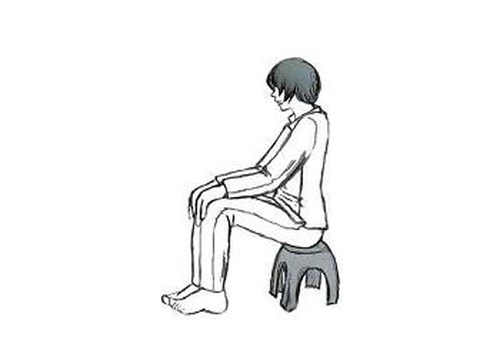 Torture illustration: Sitting on a small stool for prolonged periods of time puts extreme pressure on the body and causes excruciating pain on the lower body. The legs swell and the flesh on the buttocks starts to rupture and fester.

Ms. Liu was transferred to the 6th ward in August 2012. The torture of sitting on the small stool continued because she refused to renounce Falun Gong. She wasn’t even allowed to stand up during mealtime. For three months she didn’t have a chance to shower or wash her clothes. Her hair clumped together and her cellmates complained about her body odor. Since she could only use the toilet three times a day, she couldn’t go when she needed to. As a result she developed hyperuricemia (elevated serum uric acid). The guards, instead of letting her use a toilet more often, forced her to take medicine to control her uric acid.

She received a call on March 7, 2013, the day her mother passed away. Because she refused to renounce Falun Gong, the prison authorities denied her bail to attend her mother’s funeral.

Every month she could buy only 50 yuan worth of daily necessities, not including food. The prison provided early dinner on Saturdays and no breakfast on Sundays. She was constantly hungry on the weekends. One Sunday morning she stood up from the small stool and refused to sit back down. She shouted to the guards, “From now on I will not sit on this stool on Sundays. It’s my basic human right!” The guards left her alone, seeing that she was determined.

Ms. Liu went on a hunger strike three times to protest the persecution. The guards put a straitjacket on her to restrict her movement. A tube was inserted through her nostril into her stomach to force-feed her. 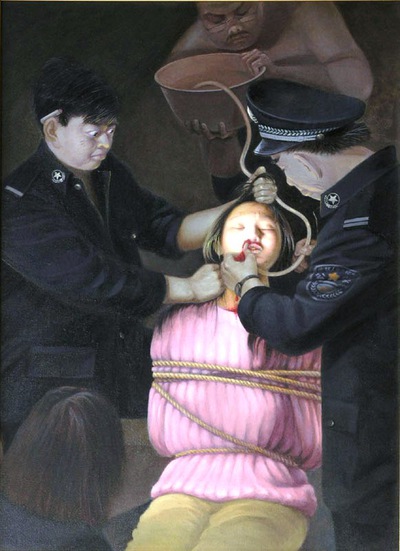 Torture illustration: A practitioner is tied down and force-fed.

She refused to leave her cell and do the unpaid labor for the prison. The guards ordered other prisoners to drag her out. Her clothes were torn and there was blood on her buttocks, legs, and feet from being dragged on the ground. 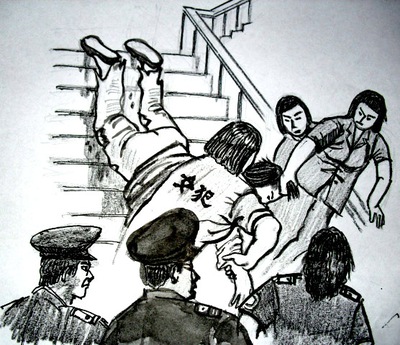 Torture illustration: Guards instigate female prisoners to torture a practitioner by dragging her down the stairs.

Ms. Liu changed how she protested. She sang Falun Gong songs and told other inmates why the persecution was wrong. The authorities retaliated by punishing everyone in her cell, thereby inciting her cellmates' resentment. She then switched to shouting “Falun Dafa is good!” when she was outside her cell. Hundreds of people would hear her this way. She fought for her rights. Eventually the guards allowed her to stay in her cell and study the Falun Gong teachings instead of going out to do slave labor. She took the time to write letters of appeal and demanded to be released without charges. The guards allowed her to use the toilet whenever she needed to. She no longer had to sit on the small stool and be watched around the clock.

She stopped wearing her prison uniform in 2014 asserting that she was innocent. Two dozen inmates held her down and put the uniform back on her. She told them that she would take it off the minute they let her go. An hour later, the inmates left the ward, and she took off the uniform. The guards ordered the inmates to come back to put the uniform on her. Eventually they got tired and she didn’t have to wear the uniform again.

The next day a group of inmates stood outside of Ms. Liu’s ward and berated her. She told them that she wasn’t afraid. As soon as she approached them, they ran away. The day after, the same group of inmates came with smiles on their faces, begging her to wear the prison uniform. She turned them down. The guards and officials threatened her but to no avail. The guards gave orders to keep her window and door wide open to freeze her. A few days later, the inmates who wore warm clothes got sick and closed the windows.

Ms. Liu wore her regular clothes until the prison authorities took away her clothes while she was showering one day in February 2016. She then turned the prison suit inside out and wore it until the day she was released.

She decided to begin doing the Falun Gong exercises in 2015. She was frightened when she first started because of the omnipresent surveillance cameras. To face her fear, she would wait for the guards to stop by and declare, “I am doing the Falun Gong exercises!” before she started. When the guards ordered the inmates to grab her, she’d stop and shout, “Falun Dafa is good, Truthfulness-Compassion-Forbearance is good.” She repeated it twice a day every day.

When the guards had roll call, the inmates were supposed to gather and squat down. The person whose name was called was supposed to stand up. Ms. Liu would stand during the roll call while the rest of the 300 inmates squatted. When her name was called, she’d say, “I want to be released without charges. I’d rather die standing than live squatting down.” In the end no one would call her name during the roll calls.

Also in 2015, the authorities put up a glass plate next to the door of each cell. Under the plate was a piece of paper listing everyone’s name and the crimes she'd committed. Seeing that Falun Gong was slandered on the paper next to her name, Ms. Liu tore it. Three weeks later the guards found out and talked to her. She told them that Falun Gong is a sacred practice and they should not insult her faith. The authorities never put the piece of paper back.

It took her two years of fighting every day with the guards and inmates before she could freely do Falun Gong exercises, study and recite the Falun Gong teachings, and write her appeals. This lasted until the day she was released in July 2020.

Ms. Liu wrote a total of seven motions to reconsider her case to Yunnan Provincial High Court while she was in prison. She received a Notice of Dismissal of Appeals from the high court on November 29, 2016. In the dismissal it claimed that her case was especially severe because she “purposely promoted Falun Gong and produced and distributed Falun Gong materials on a massive scale, knowing that it was a cult practice…”

She then appealed to People’s Supreme Court and People’s Supreme Procuratorate, explaining how the high court mislabeled and slandered the practice. She wrote a total of 39 appeals, almost one a month. After reading her appeals, the prison authorities prohibited the guards from talking to her, not wanting them to be influenced by her.