(Minghui.org) Today's news from China includes incidents of persecution that took place in 9 cities or counties in 8 provinces, where at least 12 practitioners were recently persecuted for their belief. 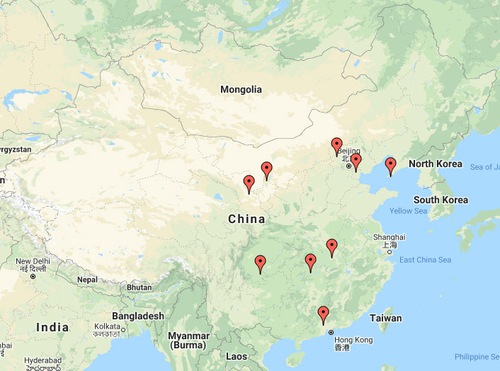 Ms. Li Shifang, Ms. Dai Qunying, Ms. Jian Hongmei, and Mr. Liu Kaisheng from Jiangyang District were scheduled to be tried by the Hejiang County Court at 10 a.m. on March 2, 2021.

The four practitioners were arrested at a farmers market in Zihuai Town, Jianghe County, on August 16, 2020. They were held in the Naxi Detention Center. The public security, procuratorate, and court system of Hejiang County have brought the four practitioners’ cases to the court.

Ms. Zhou Changlan, born in 1959, lives in Baiyun District. She was arrested on September 20, 2018, and is currently held in an undisclosed location.

Ms. Zhou appealed. The Guangzhou City Intermediate Court upheld the original verdict on April 22, 2020. The location where she is being held is not known.

They told her to go to the Wang’anfang Brainwashing Center. They also asked her husband to persuade her to go. Her husband stated firmly that she should not go. They left without achieving what they set out to do.

Dafa practitioner Ms. Wang Meiyu was reported to the police around 7 p.m. on February 18, 2021 for talking to people about Falun Gong and effective methods to avoid getting infected during the epidemic. She was arrested by officers from the Qingniwaqiao Police Station.

Ms. Zhao Shuxia from the Binhai New Area was arrested by officers from the Nankai District Domestic Security Division in downtown Tianjin on February 3, 2021.

Her mother’s home was then ransacked. The specific reason of the ransacking is unknown.

It was reported that the police called Ms. Zhao and suspended her salary for three months in October 2020. The police said that the salary suspension was related to her being held in the Nankai District Detention Center and on a hunger strike for over four months.

Ms. Zhao was also arrested at the beginning of 2016, and endured persecution for two and a half years.

She was arrested at home by officers from the Wuchang Domestic Security Division and the Wuchang Police Department on January 12. She was taken to Wuchang for physical examination. On January 13, Ms. Tong was taken to the Wuhan City No. 1 Detention Center for 15 days of detention. She returned home on January 28.

The Social Security Bureau asked her to return her salary for three years and eight months, totaling over 87,000 yuan. The reason was that when she was 50 years old, she was sentenced to three years and eight months in prison. She could not pay her pension insurance when in prison, and as a result, the Social Security Bureau claims that this period cannot be counted toward her retirement.

The judge for the Guyuan Intermediate Court went to the Guyuan Detention Center and read to Mr. Ma Zhiwu the criminal judgment (with sequence number 2020-Ning-04-Criminal-First-Instance-15) issued by the court on December 17, 2020. Mr. Ma was sentenced to 14 years in prison and fined 30,000 yuan. Mr. Ma appealed orally at the scene. Then, he filed the appeal as well as a complaint regarding the criminal sentence and other abuses he received.

Dafa practitioner Ms. Fan Ying from Wuling District was arrested at home by eight officers from the Wuling District Domestic Security Division and the local police station on December 16, 2020. She was officially placed under arrest.