Ottawa, Canada: “The CCP Is Wrong to Treat People Like This”

(Minghui.org) “The ultimate battle of mankind is for the soul and spiritual belief, because this is the ultimate freedom. One’s ability to exercise freedom is also his ability to make moral choices,” said Mr. F. David, a manager of a private company in Ottawa.

David had just signed the petition that asks the Canadian government to use the Justice for Victims of Corrupt Foreign Officials Act (Sergei Magnitsky Law) to sanction corrupt CCP (Chinese Communist Party) officials who participated in the persecution of Falun Dafa. 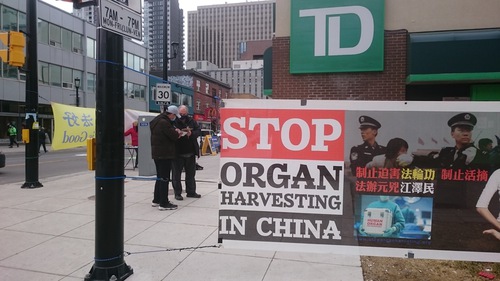 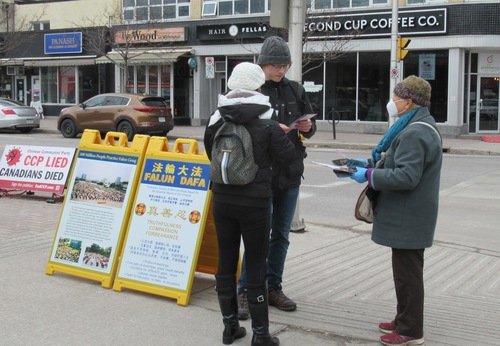 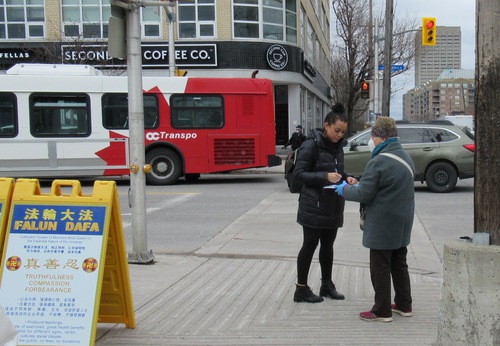 Practitioners in Ottawa collect signatures on a petition that condemns the CCP’s persecution and asks Canada to pass laws to punish human rights violators.

Falun Dafa practitioners in Ottawa, the capital of Canada, have been holding activities at major intersections in the center of the city every weekend since March 20, 2021. They collect signatures on the petition that condemns the CCP’s persecution of Falun Dafa practitioners and asks Canada to pass laws to punish those who violate human rights. Many people have signed.

David said that Falun Dafa’s faith in Truthfulness-Compassion-Forbearance is absolutely positive and is a beautiful concept that people should follow.

Speaking of how communism harms mankind, David said that the international community can help those being persecuted by setting a (human rights) example. He feels the whole world is being eroded by communism. He said, “Canada already has a soft form of socialism. Communism is becoming more and more common in the world. Democratic countries are eroding and losing their foundations, and subsequently heading towards corruption.

“One example is the stolen US election. The history of communism is very clear: The government tends to seize power through deception. This is a big problem.”

He is worried about the so-called mainstream media in today’s society. He believes these media convey filtered and misleading information, “This confuses people and they finally give up speaking for justice,” he said.

“The CCP Is Wrong to Treat People This Way”

Ms. May Le said that the CCP should not control how people live. “If somebody wants to practice a spiritual belief, that is his own business. No one should say, 'You can’t do this.' People should not suffer because of their beliefs. The CCP is wrong to treat innocent people this way.”

She said that she likes the soothing and peaceful movements of the Falun Dafa exercises. She asked what was wrong with its practitioners’ sharing their beliefs. She thought that Canadians could learn a lot from it and added, “We should provide more help to the innocent and persecuted.”

Software engineer Ahmed said that he learned about the persecution of Falun Dafa on social media. He said, “I see a lot of information about this on social media. If I can help those (victims), I will definitely do something (to help them), such as signing a petition.”

Ahmed said that Falun Dafa’s concept of Truthfulness-Compassion-Forbearance is very beautiful. He said he reflects on his words and deeds in his meditation every day.

Many people came over to sign the petition after seeing the banner. An engineer and his daughter, a high school student, signed it and gave a thumb-up.

Two female students from Carleton University said that they learned from media reports how the CCP concealed the epidemic and brought disaster to people all over the world. They signed the petition and said they hoped that the Chinese people could have a democratic and free society like Canada.

Mr. Fong, a dentist from Hong Kong, said that he moved to Ottawa 15 years ago. He said that he witnessed the CCP’s oppression of Hong Kong’s democracy and freedom during the Anti-Extradition Law Amendment Bill Movement in Hong Kong in 2019. He believed that only by ending the CCP will the Chinese people in Hong Kong and in China gain true freedom.

Falun Dafa practitioners in Ottawa have been holding car parades on weekends since the end of last August to help people understand the persecution in China and the true nature of the CCP.

Also known as Falun Gong, Falun Dafa is a spiritual practice that millions around the world have made part of their lives. It consists of two main components: self-improvement through the study of teachings and five exercises, one of which is a meditation.

Falun Dafa's belief system offers the possibility of spiritual growth through disciplined practice. Learners are encouraged to let go of unhealthy attachments as they strive to attune their lives to the qualities of the universe: Truthfulness, Compassion, and Forbearance.