(Minghui.org) Falun Dafa practitioners held an event at Mynttorget, a square near Sweden's Royal Palace in Stockholm, on March 20, 2021 to introduce Falun Dafa and expose the Chinese Communist Party’s (CCP) persecution. They talked to people about the benefits of the spiritual practice, demonstrated the exercises, and discussed the Chinese Communist Party’s (CCP) persecution. They also collected signatures on a petition calling for an end to the persecution. Several passersby encouraged practitioners. One said, “When people understand the truth, everything will change.”

Located next to Sweden's Parliament House, many people pass by Mynttorget on their way to Stockholm’s old city center. Individuals and organizations can apply for a police permit to hold activities and voice their opinions at Mynttorget. Dafa practitioners have persisted in clarifying the truth at this location for many years and have received much support and respect from local residents. 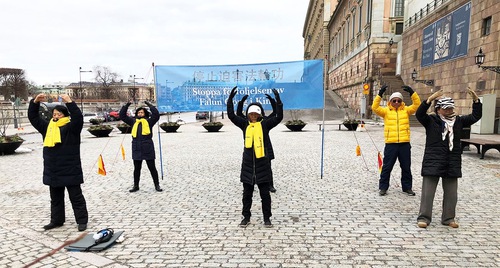 Practitioners demonstrate the Falun Dafa exercises at Mynttorget in Stockholm.

People sign a petition to encourage and support practitioners’ efforts to end the persecution. 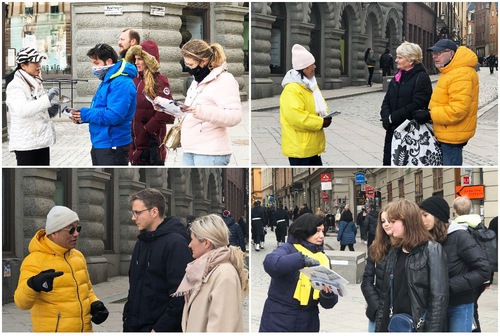 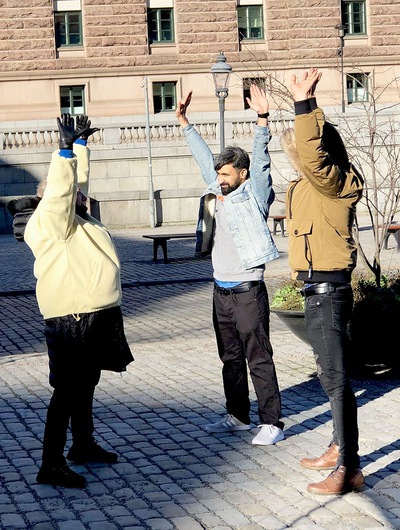 Two young men were interested in Falun Dafa and learned the exercises during the event.

“People See Hope Because of You”

Markus and Monika chatted with a German-speaking Falun Dafa practitioner for a long time. They were shocked to hear of the brutal persecution that the CCP launched against practitioners. Markus said, “I researched the CCP's history starting with the Cultural Revolution. To me, the CCP is like a red dragon and it is trying to destroy everything. If people lose their moral conscious then society will not exist.”

He pointed out that many European countries are imitating the CCP’s pandemic preventative measures and that many areas have already been infiltrated by the CCP. “The Western media are lying to people. Whenever a political figure makes a speech, I turn off the television. On the surface, everything looks logical and reasonable, however they secretly make deals with the CCP. I cannot stand to watch the news.”

Markus also said that the human body already has a good defense system against viruses. He feels that the media are deceiving people. Markus and Monika said they felt very motivated upon seeing Falun Dafa practitioners clarifying the truth. Before leaving, they thanked practitioners and said, “You are doing very well. People see hope because of you. We wish you all the best!”

“God Will Protect You!”

Fanny, a Swedish lady, greeted practitioners in Chinese. She explained that she'd worked for a year in China and was curious about Falun Dafa.

After she was told about the persecution, Fanny was shocked. “Now I know why the CCP chose Falun Dafa practitioners for forced live organ harvesting. This group of practitioners are very healthy, and killing these healthy and innocent people for others' health is simply terrifying!”

She said that while she was in China she found it was strange that she was unable to view many internet websites. “Now I know why. The CCP is censoring information and the truth. You are doing something very important. When people understand the truth, many things will change.” She signed the petition to encourage and support practitioners’ efforts to end the persecution. Her husband said, “God will definitely protect you!”

“Please pass me that petition, I would like to sign as well,” said a security guard who was on a scooter. After signing, he said, “I feel very touched every time I pass your information booth. By signing the petition, I am expressing my gratitude. No person can change the world now. Only God has that ability to punish the evil and save the good. God is watching over every kind soul, and will protect you.”

Originally from Finland, Annika has been living in Sweden for over 60 years. She said that she has been following Chinese human rights issues and is very upset about the decline of human moral standards. She feels that the CCP is the root cause of all the problems. “I really like China and believe in reincarnation. I also believe that good is rewarded and evil will meet with retribution.” After signing the petition, Annika said that she will continue to follow the human rights issues in China.

When practitioners were wrapping up their activity, a group of 40 to 50 people came to the square. They noticed the information booth and asked several questions about Falun Dafa. Two Swedish self-media hosts interviewed a Falun Dafa practitioner. Many of them signed the petition after learning about the persecution. They expressed their support for Falun Dafa and said they would help spread the information. 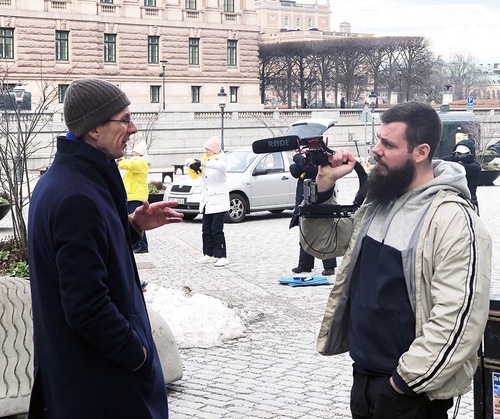 A practitioner is interviewed by a Swedish self-media host.