(Minghui.org) The International Coalition to End Transplant Abuse in China (ETAC), one of the leading organizations aimed at ending the brutality of the Chinese Communist Party (CCP), recently held a conference on February 24 on the CCP’s forced organ harvesting.

In recent articles, we have covered several speakers at the event, such as Sir Geoffrey Nice QC (chair of China Tribunal) and Wendy Rogers (clinical ethics professor and one of Nature’s 10 people who mattered in science in 2019).

Here we focus on the speech by David Matas, human rights lawyer and author. Matas has led independent investigations on forced organ harvesting in China. His books include Bloody Harvest: The Killing of Falun Gong for Their Organs (2009), State Organs: Transplant Abuse in China (2012), and others.

During his speech at the ETAC forum, Matas elaborated on the possible actions to end forced organ harvesting from a legal perspective. He called for more specific laws targeting the CCP. For example, based on Magnitsky legislation, various governments could add criminals involved in organ harvesting to their respective lists of human rights violators to be sanctioned. Moreover, professional organizations and individuals who participated in the atrocity should be excluded and isolated. Finally, reports on organ tourism should be provided by each country to assess the severity of the issue for further actions. 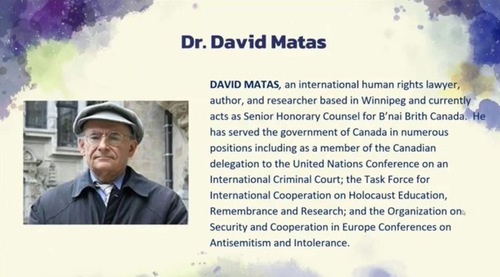 How to make laws applicable to stop organ harvesting in China? Matas thinks the CCP's laws are meaningless because the CCP controls the law-making process and only enacts and enforces laws that target others, but not the CCP itself. In other words, the CCP would not use its laws to stop itself from committing the crime of organ harvesting.

As a result, other nations should have local laws that ban forced organ harvesting activities. Such laws, once implemented, would curb the CCP to some extent. But they may not be sufficient since only limited information is available from China.

For example, the CCP has been raising funds for the military healthcare system through selling organs, but it has vehemently denied the fact. Therefore, general laws are important, but they may not get us far.

A more effective approach is coming up with laws that specifically target the CCP. The more tailored such laws are in spelling out how the CCP has committed crimes, the more effective they would be.

In many countries, the Magnitsky legislation has been applied to various kinds of human rights perpetrators, but not those involved in organ harvesting in China. Therefore, we should request that countries that have such laws add organ harvesting criminals to Magnitsky sanction lists.

Matas said that, given the widespread organ harvesting among prisoners of conscience in China, a reverse onus clause and ostracism can be applicable.

He has also discussed this previously in articles and conferences. On papers published by Chinese researchers that lacked reliable donor information, for example, “The onus should not fall on publishers or transplant professionals to show something is amiss in China. The onus is rather the reverse. The onus falls on the Chinese transplant profession to show beyond a reasonable doubt that there is no sourcing of organs from prisoners of conscience. Studies emanating from China which do not show that should be rejected for publication,” he said at the Oxford Global Health and Bioethics International Conference 2019 in a presentation titled “Ostracism or Engagement in Combating Unethical Medical Research.”

Unless proven otherwise, a comprehensive isolation or ostracism is needed, explained Matas. He said medical professionals have many ways at their disposal to achieve this goal. Instead of new strategies, these actions have existed already and they are proven to be effective in a short time. It is up to these professionals to join together and make it happen.

So far the healthcare agencies in China have made lucrative profits by stealing organs from prisoners of conscience, since there are no costs involved. Such ostracism will help them learn the consequences of this unethical behavior.

Another suggestion from Matas is that all countries should request their respective health agencies provide a report on organ tourism.

Matas said that we are in a vicious cycle. We do not have sufficient information about the organ tourism in China and do not know how bad it is. As a result, we did not put enough efforts toward stopping the crime. To end this vicious cycle, we can start a mandatory organ tourism report.

Once we know the scale of organ tourism to China, we would know its severity. That will allow us to work with the participants to take action.

Is there a need to make laws to stop the organ harvesting in China? Matas said the answer is yes. But it would effectively curb the crime only if appropriate laws are implemented in the right areas.