Fauquier County, Virginia, U.S.A.: Board of Supervisors Passes Resolution Raising Awareness of the Organ Harvesting from Living Practitioners in China

(Minghui.org) On March 11, 2021, the Fauquier County Board of Supervisors passed a resolution to raise awareness of the Chinese Communist Party’s (CCP) state-sanctioned organ harvesting from living Falun Gong practitioners.

This is the sixth county in Virginia to pass the resolution and the fifth county to do so this year.

The purpose of the resolution is to advise local residents not to become accomplices in the CCP’s organ harvesting from prisoners of conscience, especially living Falun Gong practitioners.

Chair of Board of Supervisors: Stop Organ Harvesting from Living Practitioners

Chair Christopher Butler sponsored the resolution. He said during an interview, “Thank [you], Falun Gong practitioners, [for] informing us of the issue [forced organ harvesting]. This clearly lets people know the CCP is violating human rights.” 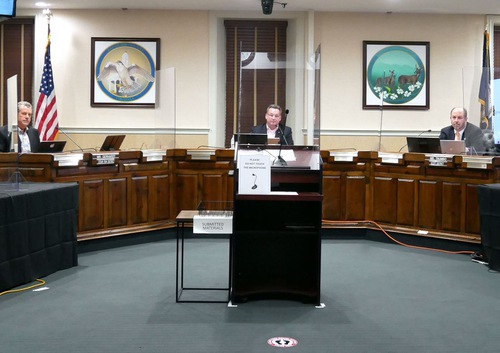 He said that the resolution advises people that organs are harvested without the donor’s consent and that the CCP’s forced organ harvesting must stop.

He indicated that the US federal government should stand up to protest the CCP’s forced organ harvesting.

Following is the text of the resolution:

WHEREAS, extensive and credible reports have revealed mass killing of prisoners of conscience in the People's Republic of China, primarily practitioners of the Chinese spiritual practice of Falun Gong, but also other religious and ethnic minority groups, in order to obtain organs for transplants; and

WHEREAS, The China Tribunal, an independent tribunal sitting in London chaired by Sir Geoffrey Nice QC, who was a prosecutor at the international criminal tribunal for the former Yugoslavia, concluded on June 18, 2019, in a unanimous determination at the end of its yearlong hearings, that the killing of detainees in China for organ transplants is continuing and victims include imprisoned followers of the Falun Gong movement; and

WHEREAS, the 2017 Freedom House report, "The Battle for China's Spirit", states that "available evidence suggests that forced extraction of organs from Falun Gong detainees for sale in transplant operations has occurred on a large scale and may be continuing;" and

WHEREAS, an investigative report published in June 2016 by human rights attorney David Matas, former Canadian Secretary of State for Asia-Pacific, David Kilgour, and journalist Ethan Gutmann, estimated that China is performing transplants at a rate amounting to "an industrial-scale, state-directed organ transplantation system, controlled through national policies and funding, and implicating both the military and civilian healthcare systems," as Kilgour described these practices in his speech to the European Parliament in 2016; and

WHEREAS, Falun Gong, a spiritual practice involving meditative "qigong" exercises and centered on the values of truthfulness, compassion, and forbearance, became immensely popular in China in the late 1990s with multiple estimates placing the number of practitioners at upwards of seventy million (70,000,000); and

WHEREAS, in July 1999, the Chinese Communist Party launched an intensive, nationwide persecution designed to eradicate the spiritual practice of Falun Gong. Hundreds of thousands of Falun Gong practitioners have been detained illegally in Chinese reeducation-through-labor camps, detention centers, and prisons, where physical and mental torture is common; and

WHEREAS, Fauquier County residents should be fully informed of the organ source in China before they make the decision to engage in organ tourism in China and Fauquier County Board of Supervisors should assist in raising awareness in this regard; now, therefore, be it

RESOLVED by the Fauquier County Board of Supervisors this 11th day of March 2021, That the residents and medical community servicing Fauquier County and the immediate region be informed about the risks of travel to China for organ transplants to help prevent our local citizens from unwittingly becoming accomplices in state-sponsored forced organ harvesting from prisoners of conscience; and will provide copies of this resolution to the Governor of Virginia and the Virginia Department of Health.