(Minghui.org) Mr. Li, a 73-year-old Falun Dafa practitioner who often talks to people about the practice and how it is persecuted in China, discovered the door to his apartment had been vandalized with red paint on Wednesday, February 17, 2021. He immediately reported the incident to the police. He said this was an attempt by the Chinese Communist Party (CCP) to threaten him. He said he will not be swayed, and will continue to expose the regime’s persecution of practitioners in China. 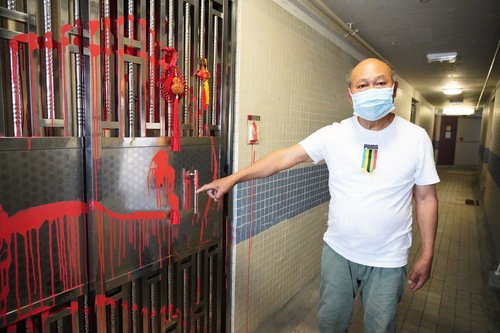 Mr. Li, a Falun Dafa practitioner in Hong Kong, discovered the door to his apartment had been vandalized on Wednesday February 17, 2021.

Mr. Li is a Chinese medicine doctor. He frequently goes to tourist spots such as Wong Taisin Temple to tell people about the persecution in China. At 6:00 a.m., his wife discovered that their front door had been splashed with red paint, which was still wet. Mr. Li reported the incident to the police.

Police arrived ten minutes later. They asked Mr. Li if he owed anyone money or if he had an argument with anyone. Mr. Li said no and explained that he had practiced Falun Dafa for ten years. He is now healthy and energetic. Wishing to tell others how great Falun Dafa is he goes to tourist attraction and hands out information about the practice. He also tells people about the persecution. “People don’t believe me when I tell them I’m in my 70s,” he said. He told the police his temper improved and he does not have any feuds with others. He feels the incident is a threat and an effort to intimidate him. 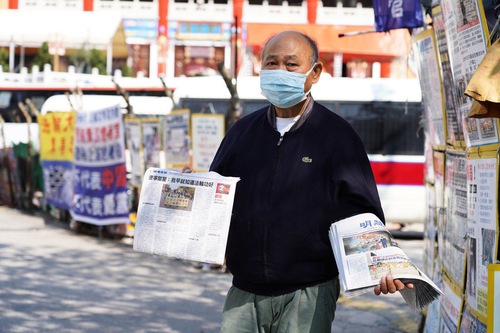 Mr. Li, 73, goes to tourist attractions every day to hand out information exposing the persecution of practitioners in China.

Mr. Li feels he has not done anything wrong in telling people about the persecution, “The CCP is removing the organs of detained practitioners by force and selling them for profit. No one with a conscience would do something like that. These brutalities must be publicized,” he said.

When he lived in China Mr. Li wrote the words, “Falun Dafa is good, Truthfulness, Compassion, Forbearance is good” on the wall of his home. He was arrested by local police and sentenced to three months in prison, and his blood was taken for testing. Fortunately, he had previously treated a local high ranking official. When the official learned of his arrest, he asked the local police station to release him, to repay Mr. Li for treating him. Mr. Li was released after being detained for five days.

Mr. Li hopes people won’t be misled by the CCP’s lies, and will stop doing criminal acts like vandalizing and destroying anything related to Falun Dafa. 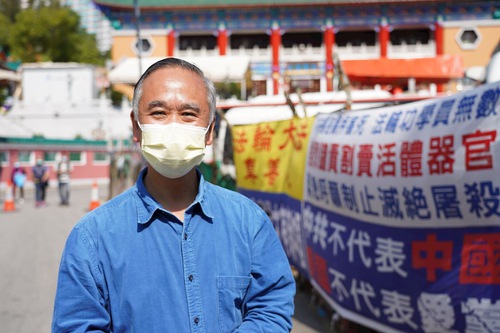 Falun Dafa practitioner Mr. Zhuang has been clarifying the truth to people at the Wong Taisin Temple tourist attraction for over 20 years.

Mr. Zhuang has been clarifying the truth to people at the Wong Taisin Temple tourist attraction for over 20 years. He expressed his concern after learning what happened to Mr. Li. “I am certain that those who vandalized Mr. Li’s door were instigated by the CCP. I hope they will read the information we hand out and realize that we are good people, unlike what the CCP propaganda states,” he said.

Mr. Zhuang pointed out that police arrested those who damaged six truth clarification sites last December. He urged those who assist the CCP in persecuting Falun Dafa practitioners to stop committing crimes and taking part in the persecution. He wished to remind them of the long-held belief that those who do good are rewarded but those who do bad deeds are punished.

“Having Served 9.5 Years and Losing Her Son, 80-year-old Woman Sentenced Again in the Persecution of Her Faith”