(Minghui.org) For many, New Year’s is an opportunity for reflection and celebration. Falun Dafa practitioners gathered in Auckland Domain Park in New Zealand to wish Master Li Hongzhi a Happy New Year. They reflected on their cultivation journeys and resolved to practice diligently in the future. They expressed their gratitude to Master for introducing Dafa and letting them know the true meaning of life. By cultivating, they’ve eliminated their ailments and elevated their realms guided by Dafa’s principles of Truthfulness-Compassion-Forbearance. In the coming year, they are determined to cultivate diligently, try their best to let people know the truth about Falun Dafa, and be worthy of Master’s saving grace. 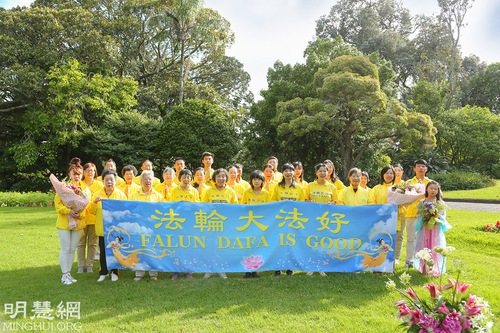 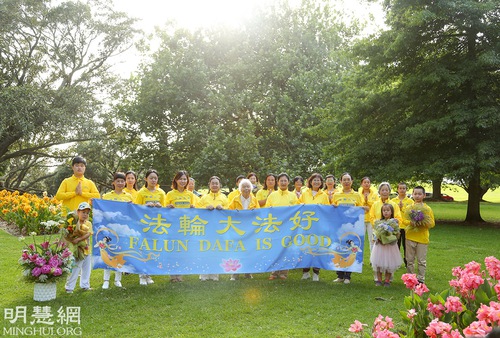 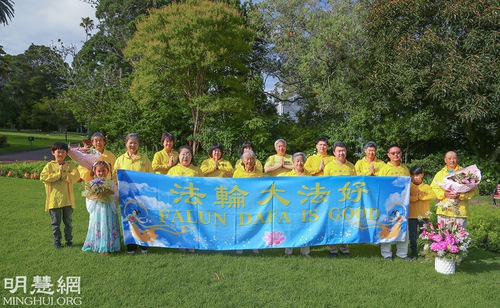 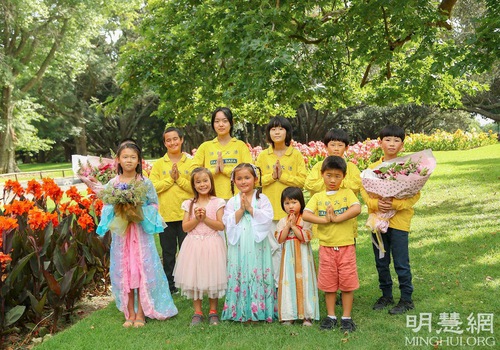 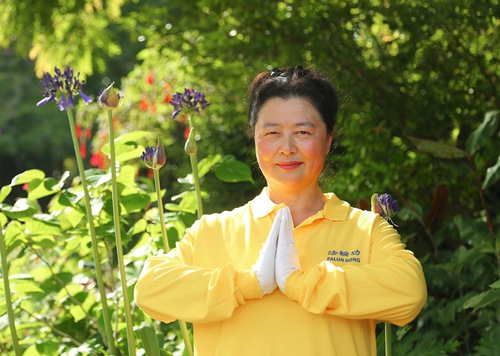 Luan Ling is a piano teacher. She started to practice Falun Dafa in Singapore in 2004. Life was tough—she was divorced and had to raise her daughter by herself. She was cheated and lost money. Learning of her difficulties, local practitioners comforted her. They introduced her to the Falun Dafa teachings and showed her the exercises. She was deeply touched. As she began following the teachings and cultivating herself, she experienced physical changes. Because she spent hours playing and teaching others how to play the piano, she suffered from back pain and cervical bone hyperplasia and had difficulty sitting. She tried both Western and Chinese medicine, but neither one helped. Her symptoms eased after she began practicing Falun Dafa. One day when she was doing the sitting meditation, through her third eye she saw something leave her body. Afterwards, her back pain disappeared. She felt Falun Dafa was amazing.

After this experience, she started to seriously study the Fa. She wondered why so many people were attracted to the principles of Truthfulness-Compassion-Forbearance and practiced Falun Dafa. Some local wealthy Singapore practitioners clarified the truth to people all year round. They lived simple lives. They didn’t seek fame or fight for self-interest. Through cultivation, Luan Ling changed her hot temper and insistence on perfection. Because of her positive changes, her family encourages her to practice.

She moved to New Zealand in 2007. Because the local Tian Guo Marching Band needed professional musicians, she became the conductor. She was in charge of teaching music theory, exams for the band members, rehearsals, coordination, and conducting. She has held this position for 14 years. She feels she’s matured after going through xinxing conflicts and tribulations.

Luan Ling said, “I knew it was time for me to step up and improve! I needed to shoulder this responsibility and help save people. It was also time for me to let go of my ego.” As the New Zealand Tian Guo Marching Band improved, they participated in many events and won awards. New Zealanders saw the beauty of Falun Dafa and the demeanor of practitioners through the band’s performances.

Luan Ling said she is very thankful for these opportunities, “Only when I put Dafa’s principles into practice during xinxing conflicts and tests did I realize how great this Fa is. I must do well and become a qualified Dafa disciple in the Fa-rectification period. I am extremely fortunate to have obtained the Fa. Thank you, Master, for saving me. I wish Master a Happy New Year!” 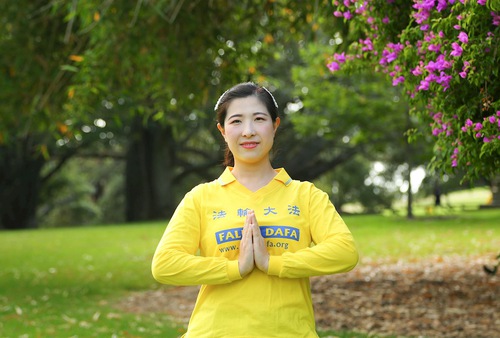 Gloria Zheng resumed practicing Falun Dafa after she became lost in the material world. She started to practice Falun Dafa with her parents when she was very young. Even though she briefly practiced, the principles of Truthfulness-Compassion-Forbearance became rooted in her heart. She worked hard at school and was a top student. She was confident and ambitious. The CCP launched a vicious campaign to frame and slander the spiritual practice in 1999, and practitioners lost their peaceful cultivation environment. Gloria was one of those who stopped practicing. Without the principles of Truthfulness-Compassion-Forbearance to guide her, she sank into the material world. “I began acting badly,” she said. “I became competitive and wanted to be on top and stronger than anyone else. I thought that was the way people should be.”

After leaving China she was under a lot of stress and faced difficulties. She realized that she didn’t really grasp why people practiced Falun Dafa. “After going through many tests and tribulations, I let go of my show-off mentality and started to solidly read Zhuan Falun,” she said. “I found that every word in the book taught me how to be a good person and how to have a calm heart and be kind to others. I didn’t pay much attention to those aspects before.”

It was not easy to put the Fa principles into practice because she had to let go of her competitiveness. “But when I became tolerant, I found my heart gradually changed and I relaxed. Sometimes I saw big rainbows in the sky after I had passed tests. I felt that Master was encouraging me.”

Through constant Fa study, she learned to look within to find her own problem in a conflict. She became tolerant and open. She learned to let go of resentment and cultivate herself by following the principles of Truthfulness-Compassion-Forbearance. She said, “Dafa teaches me to have great forbearance and bear the greatest hardships. This encouraged me to face the tribulations and adversities and become brave and strong.”

She used to think that cultivation was hard and bitter, so she sidestepped tests and did not look inward. “But now I feel cultivation is very positive and meaningful. Every hardship is valuable because I try my best to become good bit by bit, assimilate myself to Truthfulness-Compassion-Forbearance, and become a better person.”

In this material world, Gloria has chosen Dafa and gone against society’s downward trend. She doesn’t want to drift along with worldly fame and interests. “I feel very fortunate because I have found the genuine meaning of life and its value. I am no longer that perplexed person.”

With the New Year just around the corner, Gloria wants to tell Master, “My gratitude to our benevolent Master is beyond words. I will continue cultivating diligently and be worthy of Master’s salvation and his immense grace. I wish Master a Happy New Year! Thank you, Master!”

Military Doctor Gains a New Life Thanks to Falun Dafa 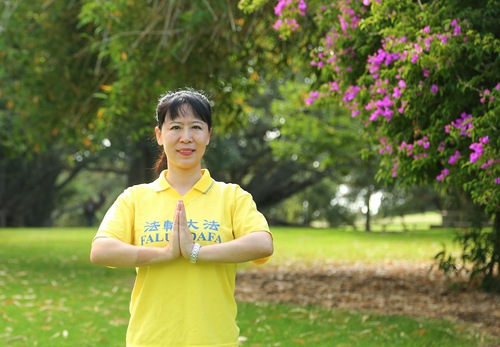 Tan Wei was a military doctor in China. She was weak and sick from the time she was a child and suffered from asthma, sinusitis, otitis media, chronic gastritis, chronic colitis, skin scratch syndrome, and arthritis before she started to practice Falun Dafa. She later had an ovarian tumor. If it was removed, she might have become infertile.

She came across Zhuan Falun in 1996. “When I opened the book, the words inside were emitting silver lights!” She said, “I was overjoyed. Zhuan Falun answered many of my questions that perplexed me. Why do I live? Where did I come from? What is the meaning of my life? I immediately realized that this is a supreme cultivation practice. I should study the Fa more and solidly cultivate myself to meet the criteria of a cultivator.”

Tan Wei used to judge people by her own notions. After she began practicing Falun Dafa, she learned how to view an issue from other people’s perspectives. She now actively helps others. Her mother took her in for a health exam and she no longer had any ailments. The doctors said it was amazing. She got married and had a child. She is very thankful to Falun Dafa for giving her a new life and giving her the opportunity to elevate herself to new realms. She shares her happiness with everyone she interacts with and tells them all her blessings came from Falun Dafa.

When the CCP started to persecute Falun Dafa in 1999 Tan Wei was detained and tortured. The CCP destroyed her happy life. Her husband, who was a military official, was forced to divorce her. Her son suffered tremendously as well. Even though she went through a lot of hardships, she never wavered in her belief in Falun Dafa. Her son started practicing after he learned the facts about Falun Dafa.

Tan Wei and her family members wish benevolent Master a Happy New Year! She said, “I would like to thank Master for saving me. Falun Dafa is righteous. Dafa removed my suffering from illnesses and helped me find the real meaning of life. I no longer have any doubts about my life. I have found the way to return to my original home.” 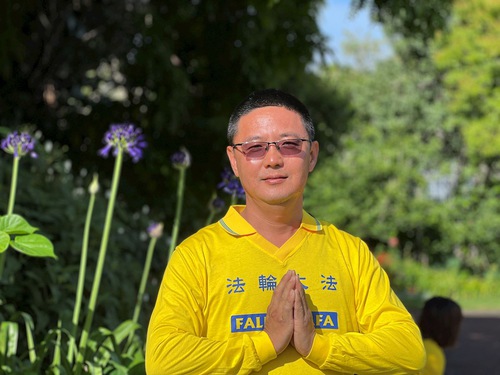 Wang Song owned a renovation business in China. He started practicing Falun Dafa in 1997. He wondered about the meaning of life before he began practicing. He said, “Master’s lectures are simple and straightforward, but he presents the universal Dafa to me. He gives me a ladder to Heaven.”

Wang Song said his perspective on the world, life, and values changed through solid cultivation. He realized that he used to do things out of selfishness. He put his own feelings first and thought he was reasonable. After he started practicing Falun Dafa, he realized that he should consider others first and become a selfless person.

Wang Song said he used to be competitive and refused to lose. After he started practicing Falun Dafa, he realized that he had a competitive mentality and must let it go, that he should follow the course of nature. He understood what his mission was and saw that this world is just like a hotel, and work was just a way to support his family. Fame, self-interests, and emotion were not the things he should seek. He should look within when he ran into problems. Wang Song said he now understands that nothing a practitioner encounters is accidental. He is very thankful to Master for his saving grace.

He moved to New Zealand in 2015 and began participating in the local Fa study and doing the exercises with other practitioners. He also participates in other activities to tell people about Falun Dafa. He is a member of the dragon dance team. He tries his best to let people know the truth about Falun Dafa so that they can discern good from bad.

Wang Song said, “There is a saying in the cultivation community that goes ‘It is hard to obtain a human body; it is hard to be born in China; it is hard to hear the Buddha Fa. The opportunity to cultivate is extremely precious. Falun Dafa is the supreme cultivation way. Truthfulness-Compassion-Forbearance are the cultivation principles.’ I am honored to come across this once-in-a-millennium chance and obtain Dafa. As the new year will soon be here, I wish Master a Happy New Year! Thank you, Master, for your saving grace!”