"Master Saved Me from COVID-19"

(Minghui.org) The author of this article, Mr. Samuel Alvarado, 59 years old, was born in Teziutlán, Mexico. He graduated in business administration and now lives in Mexico City with his wife and son. Fourteen years ago, in 2007, he began to practice Falun Dafa.

Although he is the only practitioner in the family, his wife and son are happy that he practices. His wife told him that she believes that Falun Dafa saved him, otherwise he might have died from the coronavirus infection. 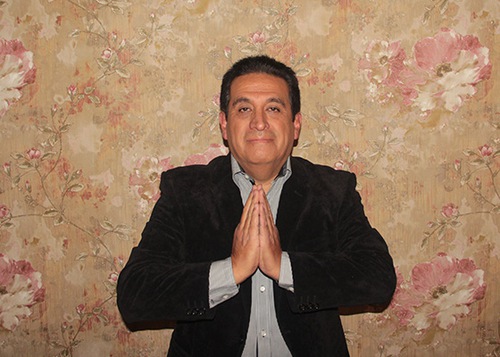 I started practicing Falun Dafa in 2007 when a childhood friend gave me a copy of the book Zhuan Falun. I began reading it and going to a practice site, but I was not persistent.

I did not understand how precious the opportunity to practice Falun Dafa was. I gradually slacked off. It wasn’t until I was on the verge of death that I woke up.

Saved from a Serious Accident

In January 2020, I fell from a two-meter-high ladder. My head hit the ground hard and I was semi-conscious. I was disoriented, lost track of time, and felt lost and dazed. I wondered where I was and how I got there.

My wife was in a panic and immediately took me to a hospital. Doctors checked me and did an MRI, but they found nothing. I was in pain for several months. The blow was so hard that it could have fractured my head and taken my life. I was being given another chance. I felt it was a warning. I enlightened that Master saved me.

Deviating From the Cultivation Path and Losing My Way

Before COVID-19 began to spread in Mexico in March 2020, I read the Fa and practiced the exercises every day with other practitioners. Everything seemed to be going well. Due to the pandemic, the practice sites were closed. Some practitioners began to use social media to introduce the practice to others.

A fellow practitioner asked me to help her with the technical aspects, as she had no knowledge. I agreed to help but I soon stopped. I became apathetic and lazy. I didn’t realize it, but it was my attachment to selfishness. I started to drift away from Dafa again. I stopped reading the teachings and doing the exercises.

In early September 2020, I began to feel sick. I thought I would be fine, however, it was quite the opposite. After two weeks, I began feeling very bad so I called 911. An ambulance arrived and I was taken to the hospital.

The Beginning of a Nightmare – COVID-19

Doctors did a CT scan, which indicated that my lungs were badly damaged. The severe inflammation made it difficult to breathe even with the oxygen supply. The doctors told me that the only recourse was to intubate me and thus avoid a lung collapse or a failure that would lead to death.

I was given some authorization papers to sign for the intubation procedure. When I refused I was told to think about it, otherwise the hospital staff couldn’t take any responsibility. Every day they urged me to sign the papers.

I felt horrible—like I was dying. I watched how others in my unit declined. One patient died within two days of being intubated; and another, who did not want to be intubated, was slowly drowning in his own fluids. I watched as doctors encased the dead inside bags and wheeled them out. I felt like I was in a prison that I couldn’t escape from.

I felt like I was dying. The medical staff kept pressuring me to sign the authorization to be intubated. In my mind's eye, I saw myself in the middle of a dark, rough, turbulent sea during a great storm. I felt like I was sinking and drowning.

At that moment, I asked Master to help me. I repeated with great force and faith “Falun Dafa is good. Zhen Shan Ren is good.” I could see my faults and I understood why I was there. I repented from the bottom of my heart and I asked Master to forgive me and give me another opportunity.

I sent righteous thoughts. For the first five minutes I cleansed my body. I focused especially on my lungs. I repeated “mie” (eliminate) that all pathogenic organisms, viruses, or bacteria were completely eliminated.

“Truth be told, pandemics only come when people’s morals and values have turned bad and they have come to have a massive amount of karma”.

“What people should do, instead, is to repent to the divine with all due sincerity, admit to their faults, and pray for a chance to change their ways. That is the way to go, and that is the magic cure.” (“Stay Rational”)

Master and Dafa Saves Me

My family hadn’t seen me for several days and did not know much, except for the hospital medical reports. They sent me a cell phone so we could communicate.

I had a hard time talking. I told them that the doctors wanted me to sign an authorization to intubate me. They asked me not to do it. Their encouragement raised my morale a lot.

My son told me on the phone, “I’m going to bring your Dafa book to you.” When he brought it to the hospital, the doctor in charge told him that it was very rare for someone in those circumstances to ask for a book. He opened it, looked it over, and authorized it along with a pair of glasses and some other things.

The next day, they gave me a bag with the book. A nurse handed it to me and, when I received it, I was very happy. I hugged Zhuan Falun and had the feeling that it was like a lifeline, a safety net in the middle of that terrible, dark, and tempestuous sea!

Doctors’ orders were that I lie face down as long as possible, since that position helped to reduce inflammation of the lungs and facilitate breathing. So, even though I was in such an uncomfortable position, I began to study Zhuan Falun.

It was like I was reading the book for the first time and it was a very different and special experience.

One day, three doctors arrived together, two men and a woman. The younger one started pressuring me again to sign the papers to be intubated. They said it would prevent respiratory failure, a heart attack, or a stroke.

The other doctor said, “He can’t even breathe, watch his stomach go up and down. He will suffocate.” The third doctor handed me a pen and the paper to sign.

I told them, “I’m not going to sign, because I’m going to be cured.” The young doctor replied, “There is no cure for this.”

I asked him, “What about those who left the hospital?” He replied, “It’s because they recovered.” I said, “I’m going to recover, too.” They didn’t say anything else. They turned around and left.

After having breakfast one morning and back to the routine of lying face down, I put on my glasses and started looking for the last paragraph I read.

The lines looked very blurry, but suddenly, one line looked very clear. I read that clear and precise line, “I have cured your diseases from the root.” I was surprised and thanked Master. Later, I wanted to read that line again and searched for it but I couldn’t find it. I was even more astonished when I realized that this was not in the book.

Recovery after Studying the Fa and Practicing the Exercises

As soon as I was able to move my body I sat on the edge of the bed. Although I could not stand I did the first Falun Dafa exercise. Little by little, I began practicing them, until I could stand and do the complete set of exercises.

Three days later, and after being hospitalized for more than two weeks, a doctor told me, “You made it. You don’t have COVID. I’m going to do your hospital pre-discharge and next week you can go home.”

After 18 days of being hospitalized, I left the hospital. The person who took me out in a wheelchair told me in the elevator, “I just took out a patient who didn’t make it. You beat the disease.” My only thought was—it wasn’t me. Master handled everything!

I was very weak and could barely move. I still had to use oxygen for two months. I continued studying the Fa. The first thing I did when I could leave home was go to the practice site and do the exercises.

When I arrived at the practice site I was filled with infinite gratitude to Master and my tears flowed. At that moment, I let go of all the feelings I was holding back during my hospital stay. I felt a great liberation and a great change in my life.

The lesson I learned is that one should walk the Fa cultivation path with respect, righteousness, and diligence. If there is anything wrong or outside the Fa, please let me know.

Thank you, Master, for your infinite and divine mercy! Thank you, fellow practitioners!