(Minghui.org) Typhoon Rai hit the Philippines during the past week, prompting evacuations and causing many casualties. Days of torrential rains in Malaysia hit the most populous state and the most affluent area, requiring tens of thousands to evacuate.

Typhoon Rai landed in the Philippines on December 16, 2021, hitting the southern and central parts of the Philippine Islands. More than 300,000 people fled their homes and coastal resorts. As of this writing, the death toll had reached 375. 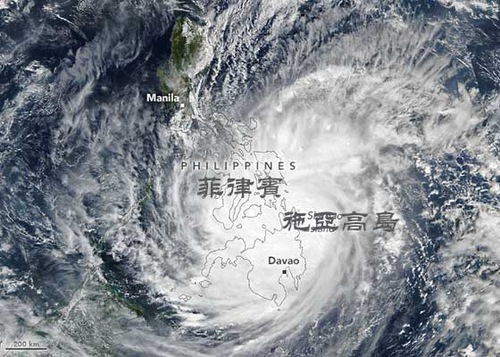 Typhoon Rai landed in the Philippines on December 16. This image was taken by the Visible Infrared Imaging Radiometer Suite (VIIRS) on the Suomi-NPP satellite in the early afternoon of December 16.

This was the strongest typhoon to hit the Philippines this year. According to UN News, “Rai” caused power outages in 63 cities, affected 73 seaports, and led to the cancellation of more than 160 domestic and international flights. According to official estimates, landslides and widespread flooding may have caused a large number of deaths. The number of victims is still rising.

Bohol, a popular tourist attraction in the central part of the Philippines, was hit hard. The Bohol Provincial Government stated that about 780,000 people out of the population of more than 1.2 million were affected by the typhoon, and more than 300,000 residents had to be evacuated from their homes.

Siargao Island is a famous surfing destination in the Philippines. It was selected as one of the top 100 attractions in the world by Time magazine in 2021.

Aerial photos of Siargao Island taken by the Philippine Coast Guard on December 17 showed that the communities on this approximately 430 square kilometer island were devastated. The town of General Luna was severely damaged, the roofs of buildings were blown off, and rubble was everywhere. The terminal building of Siargao Airport was destroyed.

In addition, almost 95% of the roofs of houses on Dinagat Island were ripped off. Corn and rice plantations in Iloilo state were submerged by flood waters.

Agence France-Presse reported that Rai was one of the strongest storms to hit the Philippines in December during the past decade.

Days of Torrential Rains in Malaysia Cause More Than 30,000 Evacuations

Malaysia has been hit by heavy rains since December 17, 2021. Severe floods have occurred in many areas. The authorities said that a total of more than 30,000 people across the country were forced to evacuate that day, most from the central part. The meteorological department also warned that the rain was expected to continue in some areas of the central part.

The heavy downpour that began on the morning of December 17 caused rivers to overflow, flooding many metropolitan areas and cutting off major roads. Thousands of vehicles were trapped.

In Selangor, the most severely damaged state and also the most populous state, nearly 10,000 people were forced to evacuate. Selangor, which is located in the western part of Malaysia and surrounds the capital Kuala Lumpur, is the most affluent region in Malaysia. There have been very few floods in the region, leaving the locals unprepared when suddenly hit by the heavy rains.

According to data published by a government website in Malaysia, there are nearly 30,000 flood victims in eight disaster areas in 16 states and federal territories.