(Minghui.org) A Falun Gong practitioner in Sichuan Province was imprisoned for three years for his faith, and the local social security bureau stopped his pension in August 2020, five years after he was released.

Mr. Zhou Yubao, a retired worker in Shifang City, filed a lawsuit against the Deyang City Social Insurance Affairs Center (SIAC) in May 2021 over his withheld pension benefits.

Shifang is under the the administration of Deyang.

The Jingyang District Court in Deyang City held a hearing on July 7 and issued a verdict on September 16, ordering the SIAC to reinstate Mr. Zhou’s pension within 30 days of the ruling and pay his court fees of 50 yuan.

The SIAC, however, has refused to comply with the court order. Mr. Zhou said he will continue to fight for his legal rights.

Mr. Zhou was well respected in his local community after he began to practice Falun Gong, but he was arrested in a park for his belief on May 15, 2012. The police violently beat him, causing him to sustain head injuries. His family was prevented from hiring a lawyer for him. A secret court trial was held on December 6, 2012, and he was sentenced to three years in prison.

Mr. Zhou discovered on January 12, 2021 that the SIAC had suspended his pension payments in August 2020 and that there were no more automatic deposits into his bank account. When he inquired about the issue, he was told that the suspension was to recoup the pension payments issued to him during his jail time between 2012 and 2015. The SIAC cited a policy that Falun Gong practitioners are not entitled to pension benefits while they are imprisoned for their faith.

Mr. Zhou visited the SIAC four times between January 21 and February 19, 2021 requesting reinstatement of his pension, but the SIAC turned down his request. “You can always bring this matter up to the attention of higher officials,” one SIAC staffer said.

Mr. Zhou then went to the Deyang Appeals Center on March 5. An employee suggested that he return later when officials from the SIAC were scheduled to be there to deal with petitioners. When Mr. Zhou returned on March 9, he met with Kuang, an SIAC director, and briefed him on his ordeal.

2) The SIAC claimed his pension was suspended based on “Detailed Rules for the Implementation Measures of Sichuan Province on Improving the Basic Pension Insurance System for Enterprise Employees,” a notice from Sichuan Provincial Department of Labor and Social Security (2006, No. 18), effective as of January 1, 2006. The SIAC did not suspend Mr. Zhou’s pension during his imprisonment, but did so starting in August 2020 to recoup the payments issued between 2012 and 2015. By doing that, Mr. Zhou argued that the SIAC violated the notice in the first place—if the “Detailed Rules” notice was a legal basis for suspending his pension at all.

3) The Pension Insurance System’s “Detailed Rules” mentioned above is only a notice from the Sichuan Provincial Department of Labor and Social Security, not an actual law in itself. Moreover, it violates numerous existing laws, including the Labor Law, Social Security Law, Social Security Fund Law, Social Insurance Law, Legislation Law, and the Law on the Protection of Rights and Interests of the Elderly. Therefore, the SIAC’s decision to suspend Mr. Zhou’s pension in order to recover the payments issued during his imprisonment is illegal.

At the end of the meeting, Kuang said his complaints would be evaluated.

Mr. Zhou received a letter on March 22 from the Deyang Human Resources and Social Security Bureau, saying that a written response would be provided by May 9.

Because Mr. Zhou did not receive a response as promised, he went to the appeals office of the Deyang Human Resources and Social Security Bureau on May 13. A clerk handed him a reply issued on April 2. She said they had forgotten to mail it to him.

In response to Mr. Zhou’s first complaint, the Deyang Human Resources and Social Security Bureau concluded that the SIAC cited the correct policy to impose the pension suspension. They did not address his second and third complaints.

Judge Tang Ning presided over the hearing. The defendant, the SIAC, was represented by two entrusted agents, Tang Feng (director of the Center) and Liu Daili (staff member).

Part of the trial proceedings:

Judge: Do the plaintiff, defendant, or jurors have any objection to the people appearing in the court? [Answer: No.]

Judge: Based on Articles 11 and 40 of Administrative Procedure Law, the Jingyang District Court is now hearing the case of Zhou Yubao vs. Deyang Social Insurance Affairs Center (SIAC) on a retirement benefit dispute.

Judge: According to Articles 7, 9, and 46 of Administrative Procedure Law, Tang Ning is assigned to be the presiding judge and the collegiate panel consists of jurors Gu Wei and Zhu Xingping. Clerk Dai Zhengqiong will be responsible for the court record.

Judge: The court has delivered to the plaintiff and defendant all relevant paperwork indicating their rights and obligations in the lawsuit. Have you all received the paperwork? [Answer: Yes]. Does anyone request the recusal of any judge or collegiate panel member? [Answer: No]

Judge: The court investigation now begins with a statement of facts and reasons by the plaintiff.

Judge: The defendant now presents evidence to the court as to its specific administrative actions.

Judge: Rebuttal from the plaintiff.

Plaintiff: I have no objection to the authenticity of these documents. But they are not laws and cannot be used as a basis for suspending my pension.

Judge: Does the plaintiff have any evidence to present?

The defendant suspended my pension based on the Notice they cited, which contradicts numerous laws, including The Constitution, Labor Law, Social Security Law, Law on Protection of the Rights and Interests of the Elderly, Social Security Fund Law, Social Insurance Law, and Legislation Law. Therefore, such an action was not lawful.

Judge: When did you retire? When was the pension suspended?

Plaintiff: I retired in April 2009 and the pension was stopped in August 2020.

Judge: When were you released from prison?

Juror: Defendant, what is your basis for suspending the plaintiff’s pension?

Defendant (Tang Feng as entrusted agent): I am presenting the following document: “Detailed Rules for the Implementation Measures of Sichuan Province on Improving the Basic Pension Insurance System for Enterprise Employees,” a notice from the Sichuan Provincial Department of Labor and Social Security (2006, No. 18).

Judge: The court investigation has concluded and the court debate now starts.

Plaintiff: The defendant has no legal basis to stop my pension. The documents provided were notices, not laws. What the defendant did was unlawful, so the suspended pension should be returned to me.

Defendant (entrusted agent): Based on laws, regulations, and detailed rules, it was legitimate to suspend the defendant’s pension. Our agency handled the matter based on clear facts, conclusive evidence, and correct application of the laws. I request that the court dismiss the plaintiff’s claim.

Judge: The court debate has concluded and each party will make a final statement.

Plaintiff: I request that the court rule according to law.

Defendant (Tang Feng as entrusted agent): I request that the court rule according to the law.

Judge: The court is now adjourned. A verdict will be announced at the next hearing.

On September 2, Mr. Zhou called the Jingyang District Court to ask about the status of his case. On September 15, he was notified by the court to pick up the verdict the following day.

In summary, the plaintiff’s request for the defendant (the SIAC) to reinstate his pension is justified and supported by this court. According to Article 73 of China’s Administrative Procedure Law, a judgment was made to request:

The 50 yuan in court costs incurred by this case shall be borne by the defendant, the SIAC.

If any party does not agree with this judgment, an appeal can be submitted to this court within 15 days from this ruling. Copies of the appeal shall be submitted based on the number of opposing parties. The appeal will be forwarded to the Deyang Intermediate Court in Sichuan Province. 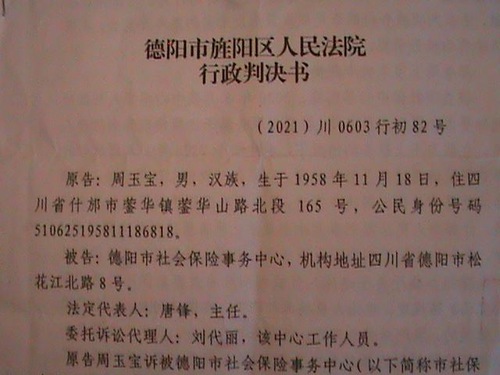 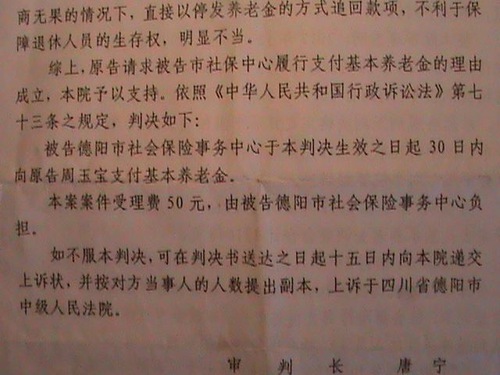 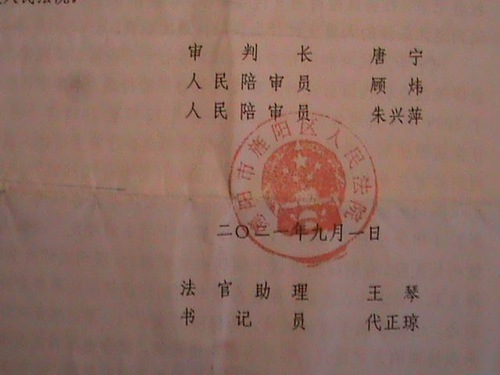 The SIAC Refuses to Comply with the Judgment

On September 26, 2021, a woman from the Human Resources and Social Affairs Bureau of Deyang Government Affairs Center called Mr. Zhou, asking him to come with his social security card and ID card to receive his pension.

When Mr. Zhou noted that this document was inconsistent with the court order, the man did not respond. He also declined Mr. Zhou’s request to photocopy or take a picture of the document. Two days later, Mr. Zhou found the document pasted on his door.

On November 10, Mr. Zhou called the Jingyang District Court to say that the SIAC had not carried out the court order. A clerk told him to contact the SIAC again.

On November 22, Mr. Zhou called the Jingyang District Court to inform them of what was going on. The Court replied on November 28 that, since Mr. Zhou had won the lawsuit, there was nothing further the court could do.

Mr. Zhou said he would continue to fight for his legal rights.