Mexico: Practitioners Hold Conference to Exchange Experiences and Reflect on Their Cultivation

(Minghui.org) A conference to exchange cultivation experiences was held in Mexico City on December 4, 2021. Falun Dafa practitioners from 17 cities in Mexico attended the event and 19 presented their articles on how they improved in their cultivation practice by following the principles of Truthfulness, Compassion and Forbearance.

Practitioners from 17 cities in Mexico attended a conference to exchange cultivation experiences. 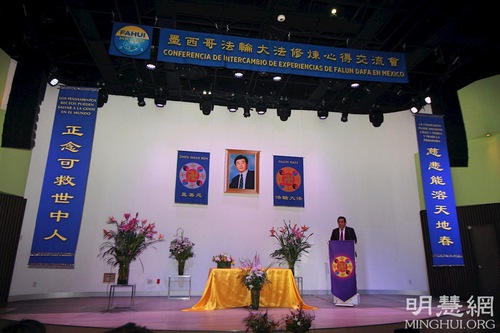 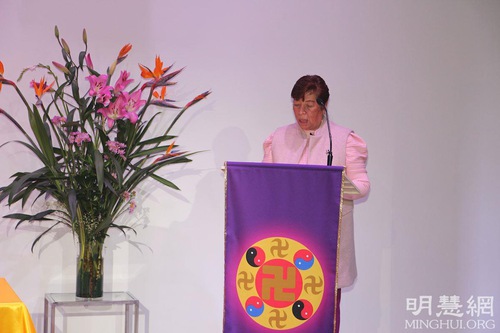 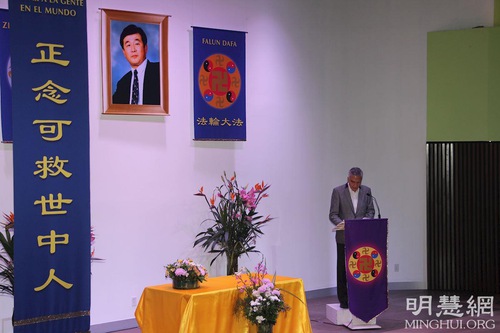 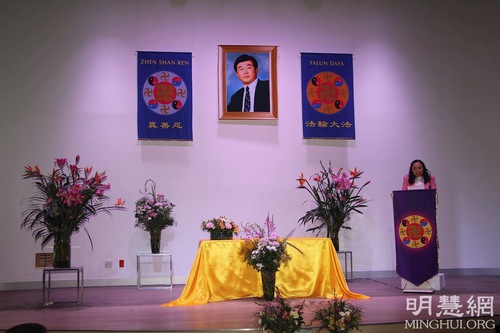 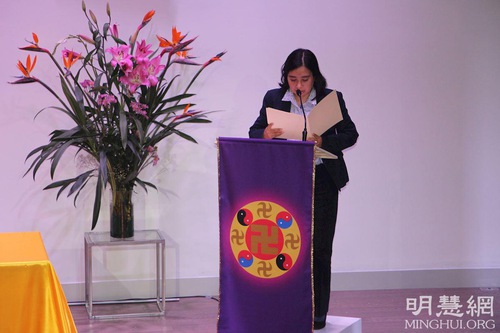 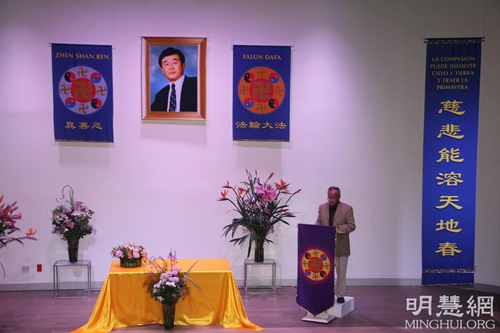 Given Another Opportunity to Practice Cultivation

Although Samuel began to practice Falun Dafa in 2007, for many years, he did not cultivate seriously. His cultivation state got worse and he developed health problems. He had a serious accident that nearly ended his life in September 2020. He was taken to the hospital. His lungs were severely damaged. Doctors pressured him to have a tube installed in his trachea, telling him it was the only way to save his life. But he simply kept saying: “Falun Dafa is good, Truthfulness-Compassion-Forbearance is good” silently and asked Master to help him.

He said, “I saw my faults and realized why I had fallen so far behind. I sincerely regretted my past actions and begged Master to forgive me as well as give me another chance.”

When he was able to talk, his son brought him the book Zhuan Falun. Doctors on duty were surprised as very few people in his condition would ask for a book to read. He started to read it at once and his condition improved from that moment. Gradually, he was able to do a bit of exercises and progressed to being able to stand up and complete all five sets of exercises. He left the hospital 18 days later.

Samuel realized that a cultivator should feel respect and gratitude while walking the path arranged by Master.

Overcoming Fear, Realizing There are No Small Things in Cultivation

Cristina used to participate in truth-clarification projects as a fundamental part of her cultivation process, but the pandemic made it difficult to hold activities to clarify the truth to people face-to-face. However, when the pandemic eased, she did not attend truth clarification activities regularly. One day while at an event, the police came and took her and two other practitioners to court for not having a printed copy of the permit. It was subsequently revealed that the incident was due to the local officials’ corruption.

Cristina and the other two practitioners knew they did not do anything wrong. They used the opportunity to tell everyone in court including the police officers and detained people about the persecution in China. Even though the Human Rights Commission immediately issued a letter, there was a delay delivering the letter to the court and Cristina finally left late that night.

She realized such a strange incident would not have happened if she had practiced cultivation solidly. She saw various human notions when she looked within including her attachments to fame, sentiments, self validation, resentment and human desires. The most prominent cause of the tribulation was fear.

She realized that she did not treat her cultivation seriously. Minor details and omissions can become huge tests. She resolved to strengthen herself through frequent Fa study and walk the rest of her cultivation path steadily.

Breaking Through Financial Difficulties Arranged by the Old Forces

Through looking within and reflecting on why she had been struggling financially for several years, Celeste realized she had been walking the path arranged by the old forces. Her situation worsened in the first year of the pandemic and became a life and death test. Through studying the Fa and reading other practitioners’ cultivation experiences on Minghui, she realized her long time poverty was the cultivation state of cultivators in the past not the state of a Dafa disciple.

After sending righteous thoughts for several months, getting rid of her notions and improving her character, she accepted an invitation to join a media project and was able to assist Master in saving sentient beings.

Predestined to Find and Introduce the Fa to Others

Lupita talked about how she learned of Falun Dafa in the U.S. then returned to Mexico to spread the practice.

In September 1997, she ran into a group of Chinese promoting the practice in New York. She felt the encounter was magical. “I knew that this was what I was looking for and knew that this was my mission... learn it well and return to Mexico to spread it.”

The process was arduous: attachments surfaced, cultivation tests emerged, human hearts manifested. During the most intense tribulations and interference, she read the Fa to strengthen her spirit and move on. Today, she realizes that the greatest attachments she has to overcome are still laziness, comfort and emotions; and that there is no more time to waste.

Lupita’s greatest wish is to continue advancing in cultivation as one body and thus be able to fulfill our sacred vows.

Fulfilling Her Duty and Clarifying the Truth to Sentient Beings

Mariana has been persisting in going to the Chinese Consulate to clarify the truth to passers by and Chinese tourists. She understood that as much as she clarifies the truth, if she doesn't raise her xinxing, she cannot save sentient beings.

She could see she needed to work on tolerance especially with her father who is testing her frequently. Mariana saw the resentment she had been harboring through years of arguing with him. She is determined to improve her character and reminded herself that her father has been always supportive of Falun Dafa. She should also respect him, validate the Fa and think of others first.

José Luis has practiced Falun Dafa for 10 years. Due to the pandemic, introducing Dafa publicly and truth clarification activities face-to-face were restricted and he dedicated more time to participating in social media projects.

By studying the Fa and continuing to do his daily work and participate in projects, he saw through the mirage of everyday life. This strengthened his resolve in practicing cultivation diligently and made him alert to the interference of the old forces. In addition, he understood that he shouldn’t take others as models. He should learn to look within and focus on saving sentient beings as one body.

Participants Inspired by Other Practitioners’ Experiences

Marco works on a media project. He traveled from Guadalajara to attend the conference. He was introduced to Dafa 6 years ago by a friend. He is 24 years old now and Falun Dafa gave him the discipline and the moral guide he was looking for all his life. He said attending this conference allowed him to identify various attachments which lead to conflicts with his father. He is determined to eliminate them, elevate himself and put tolerance and benevolence into practice in this close environment among family members. He hopes to keep looking inward and to continue cultivating himself in order to become a better person.

Linda, from Tlaxcala, has practiced Falun Dafa for 7 years. She said, “When I entered the auditorium where the conference was held, I felt a very strong energy, a very great force. I felt Master’s infinite benevolence and it made me cry.” She added that by listening to the experiences of her fellow practitioners, she was able to identify her attachments and she is determined to eliminate them. She learned that she must eliminate her attachment to being in control, and said, “It was wonderful to attend the conference because it reinforces my faith in Master and the Fa.” She added that she realized that one body means to merge with the other practitioners and be able to understand from within the tribulations the others are going through. “I am very happy and so is my family, for being able to enrich ourselves with the Fa and everything that Master gives us.”

Cintya is the eldest daughter of a family of practitioners. She began practicing Falun Dafa 11 years ago, when she was 7 years old and now she participates in truth-clarification projects. This is the second conference she’s been to. “It’s an opportunity to look inward, recognize attachments I may have, and work to eliminate them.” She added, “I value very much being in an environment of practitioners, listening to their experiences and remembering that we all form a body, work to improve ourselves and continue to assist Master in the salvation of sentient beings.”

Oswaldo began practicing Falun Dafa 10 years ago in Mexico City, before moving to the southeast of the country where he continued to practice. All his family practices Dafa now - his wife and 2 daughters. He has participated in almost all the Fa conferences in Mexico, where he enjoys listening to the experiences of other practitioners, how they overcome tribulations and improve their character. This encourages and reminds him, “How great and divine Dafa is and how important the mission to assist in saving sentient beings is. Each conference fills me with energy and I leave renewed, fortified and wishing to do better the three things that Master has asked of us and thus help save more sentient beings."

Gaby, Oswaldo’s wife, began cultivation two years ago when she saw improvements in her own health. Even though she was not a practitioner she quit smoking and experienced many other benefits. She said, “One day I felt Master’s mercy in my heart, when my husband said: ‘All that clarity you have about what is good or bad, where has it come from?’ She replied, ‘From Dafa.’” So, she decided to start practicing. “Now I get less angry with my husband and my twin daughters,” she said. She added that Dafa has also helped her in her artistic career as a flamenco dancer, forging her heart “in the midst of the tincture of the common society.” “I share Dafa teachings with my students and co-workers.” She said she was deeply moved by the practitioner’s experiences of dealing with tribulations during the pandemic and eliminating attachments in family relationships.

Oscar, a veteran practitioner began cultivation in Mexico in 2001. He said listening to other practitioners’ experiences helped him reflect and reaffirm how to face difficulties in the cultivation process. He said he was pleased to see more and more people practicing Dafa and expressed his wish to reach even more people who need Truthfulness, Compassion and Forbearance in their daily lives.

Andrés, a practitioner from Argentina who now lives in Mexico, said he began practicing Dafa in 2005. He said that through Dafa’s main book, Zhuan Falun, he connected with Chinese culture and its profound wisdom, while solving many questions in his life. He said this conference was, “An opportunity to learn about other people’s experiences in practicing Falun Dafa.” They also reminded him to “Look inward, to be serious in the cultivation and the Fa study and to do all three things well.”

Clarifying the Truth in Mexico City

Practitioners held activities to raise awareness on the ongoing persecution in China in Mexico City’s historic city center the day after the conference. They demonstrated the exercises and handed out information. 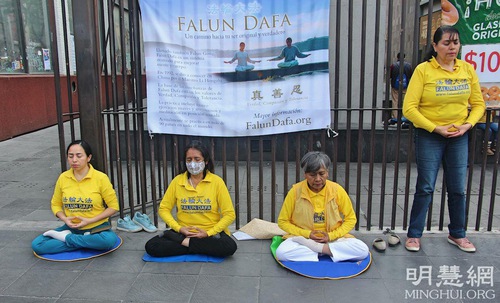 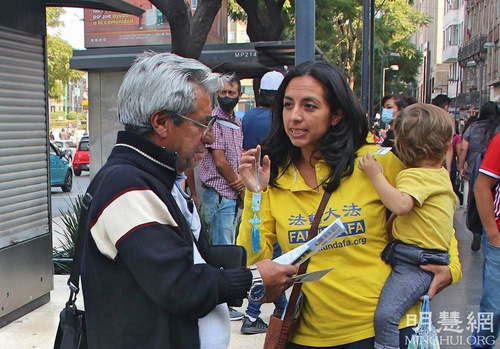 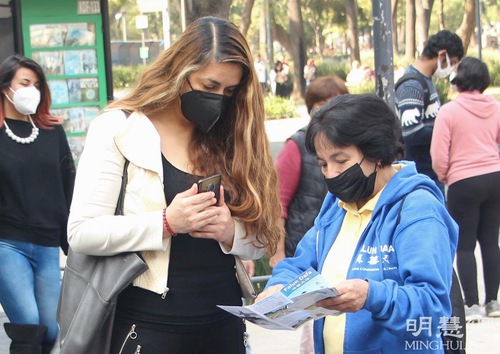 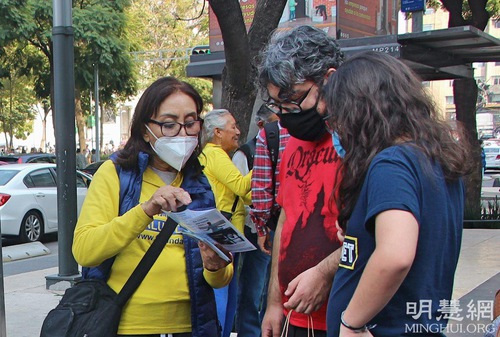 Practitioners held truth-clarification activities in Mexico city’s historical center on December 5, the day after the conference.