(Minghui.org) Today's news from China includes incidents of persecution that took place in 14 cities or counties in 9 provinces, where at least 42 practitioners were recently persecuted for their belief. 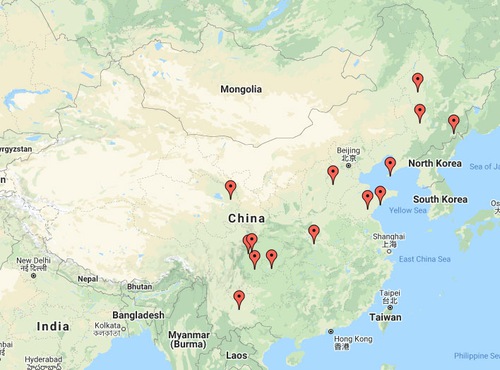 Mr. Xu Qiang was arrested by officers from police stations in the Pulandian District on July 11, 2020. He was sentenced to nine years and one month in prison.

Ms. Zhang Rongjuan was arrested and sentenced to 20 years in prison for intercepting TV signals to broadcast a documentary exposing the staged self-immolation on Tiananmen Square. She has leg disability as a result of torture. As she is about to finish her 20 year prison term, the prison authorities extended her sentence for two more years. She is being held in the 2nd Ward in the Xining City Women’s Prison.

Ms. An Fuzi is an 82-year-old retired teacher and Korean Chinese. She was arrested in late August 2021. She was held first in the Yanji Detention Center and then transferred to the Jilin Province Women’s Prison in late September 2021.

In the police brigade, the officers took statements from each of them, had them press their fingerprints, and video recorded the process. They were released at 2:00 a.m.

Ms. Li Zhi and Mr. Ma Wenchang were repeatedly harassed at home by the director and officers from the Tanxi Police Station, as well as community clerks, on or around October 1, 2021. They also received harassing phone calls. The two families were deeply disturbed.

Ms. Zhang Suqing was harassed at home by clerks from the Oujingyuan Residential District on October 12, 2021. They demanded that she renounce Falun Gong. She refused.

They called her husband in the afternoon and demanded that he make her write a “transformation statement.” He did not comply and told them to stop calling him and going to his home.

Ms. Sun Shifen was harassed in the Qianshuo Village residential committee office by officers from the Guozhuang Police Station and agents from the province Political and Legal Affairs Committee on October 13, 2021. They forced her to write a guarantee statement renouncing Falun Gong.

Ms. Li Yanyun is an 80-year-old retired head nurse. She talked to her colleagues about the persecution of Falun Gong on September 27, 2021, and was reported by her son, a Domestic Security Division officer. She was arrested on September 28 by five officers, including the head of the Xishan District Domestic Security Division Qiu Xueyan, officers from the Donglu Police Station, and assistant officers. They ransacked her home, confiscated four pictures of the founder of Falun Gong, five copies of Zhuan Falun, and two sets of Falun Gong books. She was taken to the police station.

She was brought to the Kunming City Detention Center on September 29 after police made her undergo a CT scan, ultrasound, blood test, and other physical examinations. But the detention center did not take her in because of her old age and illnesses.

The officers brought her back to the police station. They finally released her after she paid the 1,000 yuan bail.

Ms. Yu Guizhen was arrested and given 15 days of detention by officers from the Xixin Police Station. She is being held in the Weizigou Detention Center.

Ms. Wang Meixiang and Ms. Li Meijuan of Pingdu City were arrested by officers from the Pingdu City Police Department on October 14, 2021. The police imprisoned them in the Pudong Detention Center.

Ms. Zou Runzhi was arrested at home by officers from the Changshan Town Police Station at noon on October 13, 2021. The officers confiscated her Falun Gong books, brought her to the police station, and tried to force her to sign a three statements document renouncing Falun Gong. She refused. Police released her the same day.

She returned to the police station and tried in vain to get her books back.

Ms. Lei Changrong’s daughter received a phone call on October 15, 2021. The caller said that officers came from Jiangsu Province and told Ms. Lei to report to the local police station. Ms. Lei went there after 3:00 p.m. and has since not been seen or heard from. It is believed she was arrested by police from Jiangsu Province.