(Minghui.org) A nationwide experience-sharing conference was held in Argentina on October 10, 2021, which happened to be a long weekend. Attendees also split into groups and went to various places to tell people about the ongoing persecution and to demonstrate the exercises.

Due to COVID-19 restrictions practitioners had fewer chances to see each other for several months. The conference was a rare opportunity for practitioners in Argentina to get together. Many expressed gratitude to Master Li (Falun Dafa’s founder) for the chance to make progress in cultivation.

Practitioners in Argentina took a group photo during the experience sharing conference and expressed their gratitude to Master.

Seventeen practitioners read papers they wrote about their cultivation experiences. Their sharing helped attendees, especially new practitioners, to see areas where they can improve in cultivation.

Carmina Nemes began to practice Dafa when she was 10. She is now 14. She said, “I was a devout Christian. I studied all the prayers and read the Bible diligently. I often carried one or two rosary beads with me and prayed at night before going to bed. But I always felt sad and afraid and had no sense of security. I often wept for no reason. Although I have an affectionate family, I felt lonely.”

“My mother gave me the book Zhuan Falun when I was 10. I read it and did the exercises. I soon felt only Dafa was my home. I started to experience many changes. My health improved, I became outgoing, I chatted with my classmates, and made friends with girls my age. I gained confidence and stopped being frightened. My classmates stopped making fun of me and the best thing is I felt safe and happy for the first time.” 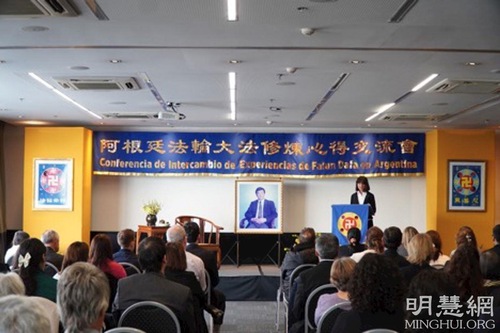 Carmina Hemes who is 14 years old this year spoke at the conference.

“I had a dream one night. I felt that I should practice Falun Dafa and Jesus was delighted that I found Dafa. I was following the principles of Truthfulness, Compassion, Forbearance and purifying myself. However, when I woke up, I was worried about what my parents would say, especially my Dad because he was not yet a practitioner. I wondered if I should take the communion ceremony. I finally told my mother about my dream and poured out my feelings. I said to her that Master Li Hongzhi (Falun Dafa’s founder) taught us to follow only one cultivation way.”

My mother and I discussed this with my father. He suggested that I should be able to go through the communion ceremony and be a Dafa practitioner at the same time. But I insisted on following the path of cultivating Falun Dafa. I explained that I should follow Master’s requirements. With my mother’s help, my father agreed. I was overjoyed and thanked Master for his help.”

Originally from Cuba, Jose Rangel is a doctor. He escaped from his native country and finally obtained a visa to stay in Argentina after going through many difficulties. He shared his extraordinary journey in obtaining the Fa.

Jose came to Argentina for the first time in 2015. He attended an international convention at a restaurant and read information on Falun Dafa and watched a video introducing the spiritual discipline. He wanted to learn more. A practitioner who worked at the restaurant told him about the persecution and gave him the Nine Commentaries on the Chinese Communist Party as well as several Dafa books including Zhuan Falun.

When he was invited to Argentina in 2018 Jose applied for political asylum—but the government turned down his request. Without a job, income or legal status, he became homeless. He could only walk every day as he had no money to take public transportation.

One day Jose walked past a Law University and read information about Falun Dafa. Someone gave him a brochure. He took one glance and immediately told the practitioner that he knew about the persecution in China and had read Zhuan Falun. However he no longer remembered the name of the restaurant nor its address where he obtained the books. The practitioner who gave him the brochure said he was a chef at that restaurant! This extraordinary encounter helped Jose get in touch with Dafa again. He began to work at the restaurant and became a practitioner. Shortly afterward the government accepted his application for political asylum.

He will never forget that day – May 13, 2019. Several practitioners went to New York to attend a Fa conference. He received a letter notifying him his permanent residency was approved that day. Jose said May 13th is Master’s birthday. He felt bad that he was unable to send greetings to Master who gave him a present instead. He went to get his visa that day. The government staff said he was very lucky because it was not easy for Cuban refugees to obtain permanent residency. He told them about Dafa and the persecution. 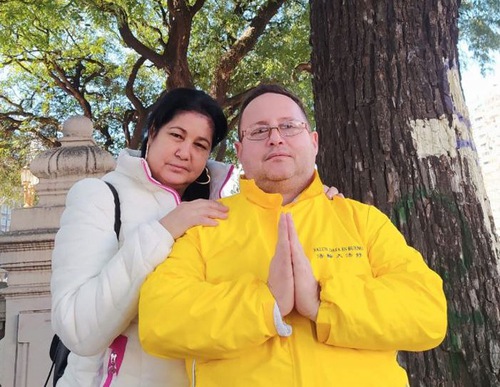 Jose was recently certified to practice medicine in Argentina. Three months ago his wife and son managed to leave Cuba and now the family is finally reunited. He said all these blessings came from Master. He is determined to practice cultivation diligently.

Becoming a Practitioner After Reading Zhuan Falun on Military Duty

Oscar Galvez is a soldier. His wife saw a Truthfulness, Compassion, Forbearance Art exhibition when they moved to a small city. Soon afterward she began practicing Falun Dafa—but Oscar was not interested. One day he had to go to the mountains for many days on an assignment. His wife gave him Zhuan Falun and asked him to read it at night. He reluctantly put the book in his bag. After training all day, at night the other soldiers chatted about mundane things. Bored, Oscar began reading Zhuan Falun. He said that reading the book for several days changed his entire life and he decided to practice cultivation. 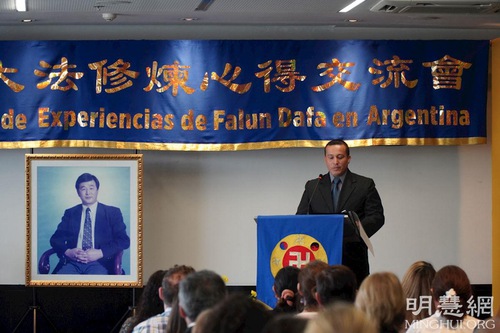 Oscar Galvez began to practice Dafa while he was in the military.

But many tests came up. Being able to attend this conference was another test: two weeks ago, his senior officer announced that they could not have weekends off as all departments had to prepare for an important event. The conference and truth- clarification activities were scheduled on the same weekend. Oscar really wanted to attend the experience-sharing conference and activities but he could not disobey military orders. He repeatedly mustered up his courage, hoping to speak to his superior, but was not able to. In the end, he went to his officer. He was nervous and told him that he is a Falun Dafa practitioner. He asked for permission to attend this weekend’s activities. Surprisingly, the officer said the department he was in had performed well and thus he was granted leave.

Oscar said this was a test for him, a test of his conviction. He was able to use the opportunity to clarify the truth to his superior and passed the test. He was grateful to Master for looking after him.

Every attendee stayed after the conference and shared their thoughts and reflections after listening to fellow practitioners’ experiences. The new practitioners said they gained a lot and realized the importance of being more diligent in cultivation. Many expressed gratitude for Master’s compassion in helping them obtain the Fa in this final moment and becoming a Dafa disciple during Fa rectification.