(Minghui.org) Today's news from China includes incidents of persecution that took place in 18 cities or counties in 11 provinces, where at least 27 practitioners were recently persecuted for their belief. 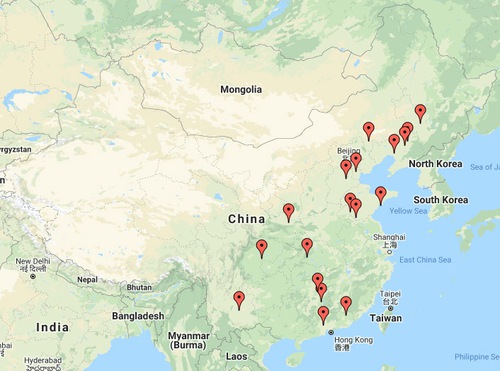 Mr. Wang Meixiang and Ms. Li Meijuan from Dongliuquan Village, Yunshan Town, Pingdu City, were tried for the third time by the Huangdao Court on the afternoon of September 15, 2021. They are being held in the Yunshan Police Station.

Ms. Chen Qiuxiang from Maying Township, Liangshan County, was arrested while distributing information about Falun Gong on August 29, 2019. The detention center refused to accept her due to her poor health, and she was twice released on bail.

Ms. Chen was quarantined in the Yutai Detention Center for 21 days. She was taken to the Jinan Women’s Prison on September 16, 2021.

Ms. Zhang Wen from the Shanting District was arrested by officers from the Sangcun Town Police Station on August 6, 2021. She was released after 10 days of detention.

Ms. Xing Jinyun was previously arrested for distributing Falun Gong informational materials. She was constantly harassed by the authorities afterwards. In order to avoid further persecution she left home.

On August 25, 2021, a warrant was put out via the social media app WeChat for her arrest on the grounds that she “used illegal means to undermine the implementation of the law.”

Ms. Li Xuesong, 73, has been missing since August 23, 2021. It was recently reported that she was arrested and held in the Xujiawan Detention Center, Weiyang District.

The cases against Ms. Wang Jinhui and Ms. Qiu Tieling from the Xincheng District were brought to the Yinzhou District Court.

The two practitioners were arrested and taken into custody by officers from the Xincheng District Police Department on June 4, 2021. Later, their cases were turned over to the Yinzhou District Procuratorate.

Party secretary He Xiaohong of Diaotian Village, Shima Town, Xingning City, and officers from the Xingning City Domestic Security Division went to Ms. He Xinfang’s home on the morning of August 6, 2021. They photographed her with their cell phones. They searched her home, tore up a painting with Falun Gong information on it, and confiscated a Falun Gong book. Before they left they threatened Ms. He.

Ms. Li Qian is being held in the Yunnan Province No. 2 Women’s Prison. She has developed heart disease as a result of abuse.

Mr. Zhou Shaotang, 83, is from Yintun Village, Dongguo Town. The procuratorate notified him and his family that he would be tried at 2 p.m. on September 28, 2021.

Officers from the Yangjuanzi Town Police Station ransacked Mr. Zhou’s home on January 13, 2021. They confiscated several Falun Gong books and tried to arrest Mr. Zhou. His non-practitioner wife, who is also in her 80s, suffered from high blood pressure and could not move. Mr. Zhou also slumped to the floor. The family refused to let the officers take Mr. Zhou away, and the confrontation lasted for three or four hours before the police left. Afterwards, they harassed Mr. Zhou and his family once every two or three days.

People from several police stations, sub-district administration offices and community management offices in Xiling District have been harassing Falun Gong practitioners Ms. Liu Zaimei, 70, Ms. Ye Weiying, 80, and Ms. Cui Yuanchang, 79. They have pressured them to sign paperwork and have threatened to take the practitioners to brainwashing centers if they refused to sign.

Mr. Peng Junnan, 79, was told to go have a talk at the Xidu Town Police Station on the morning of September 16, 2021. Officer Hu Xiaoming and six other people attended the session, including the deputy Party secretary of the Xidu Town Government and the residential committee director.

The Qinglongli Community residential officer from the Dadong Police Station and residential committee personnel came to Ms. Cen Deli’s home on the afternoon of September 15, 2021. The officer wanted to enter her home, but she did not let them in. She refused to go to the community police station. She also refused to cooperate with any of their demands. These people left without entering her home.

An officer from the Shandongmiao Police Station called Mr. Meng Xiangli on August 19, 2021, and said he would come to Mr. Meng’s home to take pictures. Mr. Meng told him not to come and clarified the truth to him.

In early September 2021, twelve police officers broke into 70-year-old Ms. Liu Shuling’s home in Ninghe District, on the grounds that she was caught by surveillance cameras while clarifying the truth to people on the street in June. Ms. Liu told them that she was not the person who was recorded, but the officers refused to listen to her. They confiscated photos of the founder of Falun Gong and Falun Gong books.

Several people from the Jingkai Sub-district Administration Office knocked on the door of Ms. Wang Xiaojie’s home on September 8, 2021. They pressured her to sign paperwork, which she refused.

Three people, led by the head of the Anren County Domestic Security Division, went to Mr. Peng Anlin’s home and harassed him in February 2021.

At the end of April, the deputy secretary of the county Political and Legal Affairs Committee (PLAC) led eight or nine people to Mr. Peng’s community to have a talk with him.

In June, people from the local township government and the township police station went to Mr. Peng’s community to have a talk with him.

On September 16, 2021, Zhang Jiacai, deputy secretary of the county PLAC, and others asked schoolteachers to ask Mr. Peng’s wife to come to the school. When she arrived, county and township PLAC officials and village security personnel pressured her to sign the “three statements.” Mr. Peng’s wife, who also practices Falun Gong, firmly refused to sign the statements.