(Minghui.org) Two women from Baoding City, Hebei Province were arrested on December 3, 2020, for distributing information about Falun Gong. The police interrogated and tortured Ms. Yin Shufen, 61, and Ms. Tian Yanhong, 56, until they vomited blood and convulsed involuntarily. The police released them three days later only because the local detention center refused to accept them.

Since the Chinese communist regime launched the persecution of Falun Gong, an ancient spiritual and meditation discipline, in July 1999, all practitioners in China are facing constant danger of being harassed, arrested and tortured for upholding their faith or disseminating information about it.

The police chief, Li Chao, and three other officers of Bailong Township Police Station interrogated Ms. Yin and Ms. Tian without their legal counsel present. They asked about who made the Falun Gong literature for them to distribute. The practitioners didn’t answer the question, but argued that practicing Falun Gong was their constitutional right. Outraged by their response, Li shouted, “Throw them into the cages!”

Li ordered his officers to take the two women to a hospital for health examinations. Both of the practitioners’ jackets were torn when they resisted going with the police.

When the two practitioners’ families went to the police station later that day, Li had them sign the practitioners’ detention notice and write statements to denounce Falun Gong. He also extorted 1,000 yuan from each family.

Mistreated in the Hospital

The practitioners were tested for Covid 19 at one hospital, before being taken to another hospital for blood and heart examination. Because the practitioners refused to cooperate during the tests, Li constantly asked the officers to treat them harshly. Following his instructions, the police held the two women up and then dropped them onto stretchers to be wheeled to different rooms for various tests. In Li's words, “Let's not beat them and cause external injuries. Just drop them onto the gurneys like that and it won't cause any visible injuries.” When a doctor asked the police to go slower while pushing the gurneys over a door threshold, they responded, “The bumpier the ride, the better! They [referring to the two practitioners] are not afraid of bumpy rides!”

Li also asked to get a medical resident to draw Ms. Yin’s blood. He and his officers held her arms down and covered her face with her shirt. They asked the doctor to draw extra blood from her and not to help stop the bleeding.

The doctor pricked Ms. Tian’s arm three times to draw her blood. Her arm was still bruised days later. When the officer threw her onto the stretcher, she felt dizzy and almost fainted.

After the torment in the hospital, the practitioners were taken to Mancheng District Public Safety Bureau. The officers dragged them out of the car, down to a basement, and onto metal chairs. They were shackled to the chair and tortured. As a result of the torture, Ms. Yin began to retch uncontrollably and Ms. Tian’s arms couldn’t stop twitching. Accusing them of acting, an officer dragged Ms. Tian by her shirt and threw her at the basement entrance. Her shirt was pulled up all the way to her head, leaving her topless, laying on the cold floor, until a village official came along and helped her up. 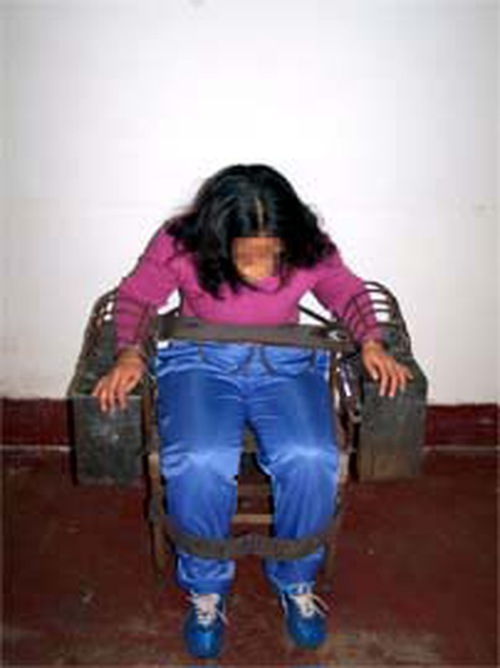 When the practitioners later requested to use the restroom, the officers dragged them to a yard and forced them to relieve themselves in front of six male officers.

After three days of detention, on December 6, Ms. Tian began to have spasms and vomit blood. Ms. Yin also vomited blood. That afternoon the police informed the practitioners’ families to pick them up at the detention center.

When the families came, Li made them wait for an hour and had other officers taking their pictures without their permission. Li then threatened to arrest them if they practiced Falun Gong. The families left after knowing the police had no intention of releasing the practitioners.

The two practitioners suffered numerous chronic illnesses before they took up Falun Gong. The practice helped them recover.

Ms. Tian’s husband used to beat her and had extramarital affairs. She worried so much that even sleeping pills could not help her rest. She had nervous breakdowns, digestive problems, anemia, and gynecological problems. Although she divorced and and remarried, her new mother-in-law looked down upon her and they had many conflicts. Meanwhile, Ms. Tian still struggled with poor health and was a frequent visitor to the hospital.

While taking care of her cancer stricken father in 2004, Ms. Tian was introduced to Falun Gong and its teachings. She identified with the principles and decided to learn the practice. All of her illnesses disappeared before she even noticed, and she also became more considerate and resolved all the conflicts with her new family.

Ms. Yin used to suffer from a swollen abdomen and chest pain. Her limbs hurt terribly from severe swelling. She had fatigue and a bad temper from the constant pain. The medicines she took and the acupuncture she received did not help her.

After 20 years of suffering, a friend of hers recommended Falun Gong to her. She went to a practice site and listened to other practitioners read Zhuan Falun, the main book of Falun Gong. As she listened, she decided to live her life following the principles of Truthfulness, Compassion, and Forbearance. Her pain and suffering went away gradually.