(Minghui.org) At 2 p.m on New Year’s Day, Falun Dafa practitioners in Taichung gathered in front of the city government building to do the exercises and send greetings to the founder of the practice, Master Li Hongzhi. They conveyed their utmost respect and said in chorus: “Master, Happy New Year! Falun Dafa is wonderful! Truthfulness, Compassion and Forbearance is good!”

The grand, peaceful scene of practitioners doing the exercises together caught the attention of passersby. Some took photos while others signed the petition calling for an end to the persecution in China, and some even joined in to learn the exercises.

During the holidays, practitioners from all walks of life gathered at the city government building to demonstrate the exercises and tell people how amazing the spiritual discipline, Falun Dafa, is. Practitioners reminisced about their personal experiences and how their lives have improved after they began practicing. 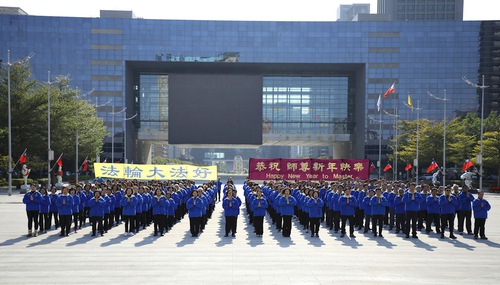 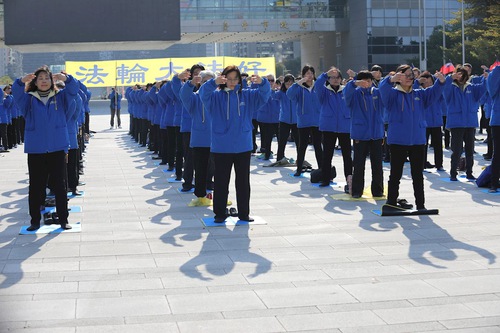 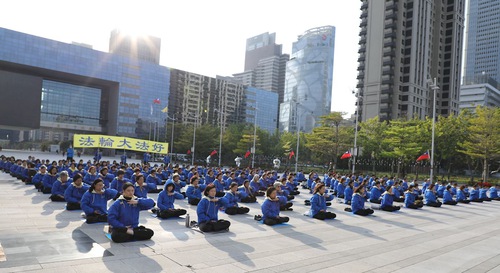 Practitioners in Taichung do the exercises in front of the city government building on New Year’s Day. The peaceful scene attracted the attention of many passersby. 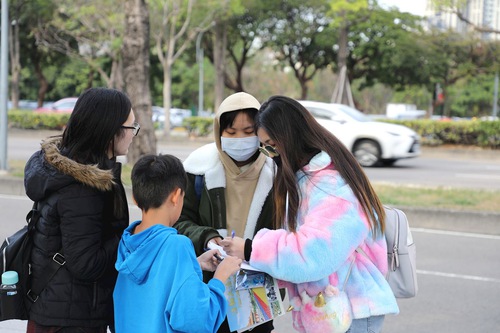 “I feel happier,” said Jihui who has been practicing Falun Dafa for 21 years. “I know where I come from and where I am going.” She said that from childhood she was always interested in Gods and Buddhas. Her mother introduced her to Falun Dafa. Her thoughts and actions slowly changed as she kept reading the teachings, and her relationship with family and friends improved. 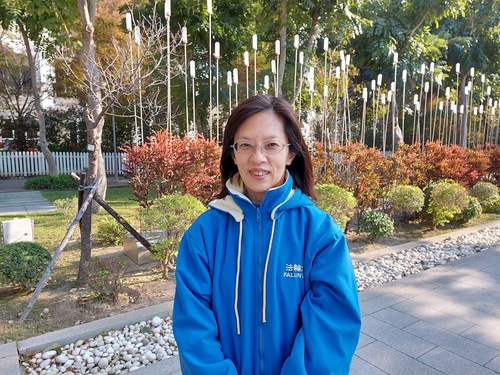 Jihui who has been practicing Falun Dafa for 21 years says she now feels happy.

Jihui said that she tries to be a better person through a deeper understanding of the teachings and by applying them in daily life. She said that influenced by modern trends when she was young, she pursued things such as rights and equality. This made her very self-centered. Through practicing cultivation, she realized this was wrong. She learned to let go of her competitive mentality and now thinks of others first. She is grateful to Master Li for helping her see the truth.

Learning to Treat Conflicts with Compassion

Huang Yaling who is 33 this year has been practicing Dafa for over a year. She credits the practice for improving her health and family relations. She could hardly believe it when she read on the internet two years ago that Falun Dafa practitioners were being killed for their organs in China. “How can this be possible in today’s world?!” she recalls saying. 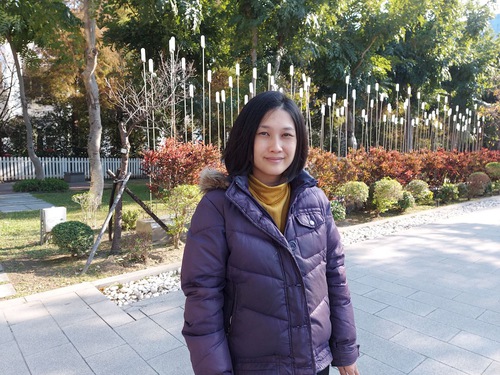 Huang Yaling who has been practicing for over a year credits Falun Dafa for improving her health and family relations.

She searched the internet and learned how to practice Falun Dafa. As she listened to Master Li’s taped lectures, did the exercises, and read other practitioners’ cultivation experiences, she tried to improve her character according to the teachings. She felt better. Minor problems such as dry eyes and constipation disappeared. She no longer needed to take health supplements.

Under her recommendation, her husband also began practicing. She said that their relationship has become more harmonious. When they have disagreements, they exchange understandings based on the teachings and remind each other to be compassionate. Her method of educating her children has also changed. In the past, she would resort to negative ways to teach her children. Now she's able to control her temper.

Yaling said she feels fortunate to have found Falun Dafa.

He Suzhen and her husband started a factory from scratch when they were young. Their business flourished through years of hard work. However, the couple frequently argued. Suzhen said she did not know how to be forgiving while her husband often said things that hurt her. The atmosphere at home was tense. 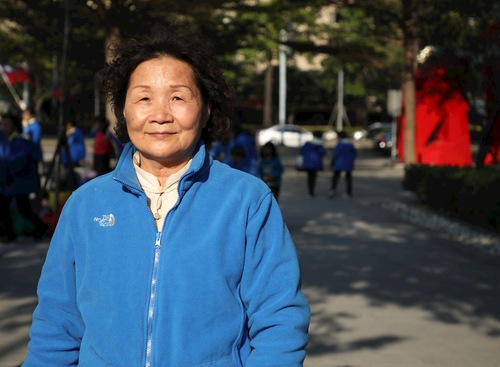 He Suzhen and her entire family practice Falun Dafa. The three generations of her family now get along well.

After she began practicing in 1999, her temperament and health greatly improved. She learned to reflect on her shortcomings. Her husband and children witnessed her transformation and one by one they began to practice Dafa. Now, everyone in her family practices and three generations get along well.

Her husband decided not to invest in China after learning about the regime’s brutal persecution of Falun Dafa. Instead, he began to put his money in ecological parks, taking the lead in promoting environmental protection in Taiwan.

Going into the new year, Suzhen hopes people can realize the beauty of Falun Dafa and survive the current crisis. She expressed her deep gratitude for Master and is determined to practice cultivation diligently.

Wang Lixia, who makes shoe samples, has been practicing for 12 years. She said, “I am more forgiving now and see things from a different perspective after practicing cultivation.” Previously, she was very strict in educating her children and insistent that everything had to be done her way. She was not close to her children. Her oldest son was in the 6th grade when his father passed away and this deeply affected him. He hardly spoke at home and kept to himself. Her younger son came in last academically at school. 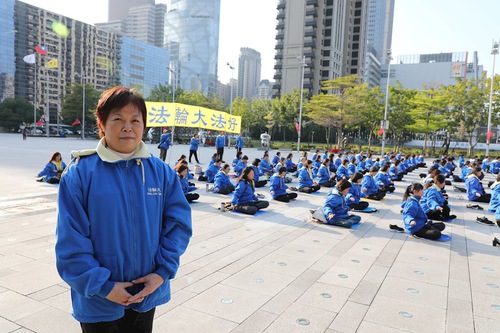 After she began practicing, she stopped insisting on her way and learned to respect her children’s decisions. The family's relations became harmonious and her oldest son now confides in her. Her youngest son used to do poorly at school, but he is now studying engineering in Germany. Teachers view her son’s transformation and achievements as a miracle. Wang Lixia credits all these blessings to Master Li.

“My son was exposed to the CCP virus in his dorm while he was studying in Germany. He was fine because I told him to remember and say, Falun Dafa is good, Truthfulness, Compassion, and Forbearance is good.” She hopes that people will appreciate the goodness of Falun Dafa and not be infected by the CCP virus in the new year.

Ms. Cai who works in an international recruitment agency and teaches languages made a special trip to the city government building to watch practitioners do the exercises. She said she wanted to know more about Falun Dafa. She thinks practitioners are kind and positive.

Ms. Cai saw practitioners many times on business trips overseas. She thinks the practice must be good and righteous because it has spread to so many countries worldwide.