(Minghui.org) “I was detained in a detention center when the staged self-immolation on Tiananmen Square occurred [in January 2001],” said Lizhi He, former senior engineer at the Chinese Ministry of Construction.

Lizhi was held in the Haidian Detention Center, Beijing, for mailing information about Falun Gong to his colleagues in July 2000. “After being tortured for several months, I was weak. I was locked in a cell with more than 30 other people and we were forced to watch the ‘Tiananmen self-immolation’ video,” he said. 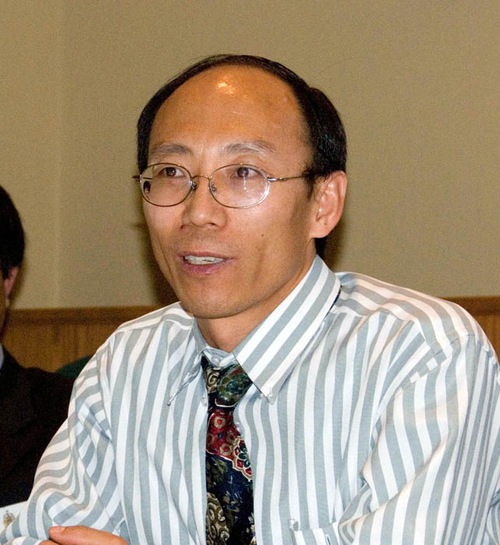 Lizhi He, a Falun Gong practitioner

“The Staged Incident is Bizarre”

“The staged incident is so absurd and bizarre, but its impact is very bad,” Lizhi said. “Those who did not understand Falun Gong were shocked watching the video. I didn’t know what the general public's reaction was because I was detained. I was surrounded by a group of gangsters and robbers. They just looked at me blankly.”

He was held in the detention center for seven months even though practicing Falun Gong is not illegal. “The detainees were curious when I entered the cell. They just knew I was a Falun Gong practitioner. They wondered why I was there as they thought that only criminals were detained,” he said.

“I told them I was a Falun Gong practitioner and wanted to be a better person. I was arrested for telling people the principles of self-cultivation and mailing some informational materials. They were surprised. They gradually started to chat with me.”

“Some of them were terrified as they feared imprisonment. Others were homesick. Some took drugs. They were all suffering and frequently complained to me. I comforted them and told them about Falun Gong's principles. They gradually came to know Falun Gong was good and respected me.”

He continued, “But after we watched the staged self-immolation video, a police officer told them, ‘A Falun Gong practitioner is detained in your cell. You’ll know what they're like after watching the video.

Lizhi said, “The video deceived and misled the detainees. Their attitudes suddenly changed and they thought I was a bad person.”

Lizhi He was escorted to prison one month after the staged self-immolation. The prison guards used the video from China Central Television (CCTV) as a psychological torture tool.

“In prison, the video of killing and suicide that were fabricated to defame Falun Gong was played over and over. The video included the little girl in the staged self-immolation on Tiananmen Square and other horrible scenes. We were forced to watch the video for over ten hours every day, and we were not allowed to close our eyes.”

“They played and re-played the videos of the horrible scenes to make us associate them with Falun Gong. Then, they tortured us with electric batons. They used physical and mental suffering to make us form a conditioned reflex whenever we thought of Falun Gong. They were so evil.”

“The CCP is Evil Beyond Imagination”

As soon as he watched it, Lizhi realized the video of the staged self-immolation was the Chinese Communist Party’s (CCP) new tactic to bolster the persecution.

He said, “From the beginning of the persecution, CCTV framed Falun Gong with many hoaxes, including their claim of 1400 death cases, killings, and suicides. The defamation programs were broadcast throughout China. But they failed to have the effect the CCP wanted.”

“Because there were so many Falun Gong practitioners, people knew what Falun Gong was. Many people started practicing Falun Gong because of health issues. They had various illnesses that hospitals could not cure. Then tried qigong but didn’t get better. Finally they tried Falun Gong and soon recovered.”

“I think most practitioners started practicing Falun Gong because of the principles of Truthfulness-Compassion-Forbearance. From the bottom of our hearts, we knew the solemn and sacred nature of cultivation and wished to be better people. As soon as we saw the CCP's lies, we understood they were false—however delicately they were fabricated.”

“But we Chinese know the CCP is evil beyond people’s imagination,” he said. “So when I saw the video of the self-immolation in the detention center, my first reaction was pain: the CCP was spreading lies to defame Falun Gong again.

“I knew Falun Gong practitioners would not do such things. As soon as I saw it, I knew it was framing and defamation. The CCP wanted to fabricate such lies—even killing people on Tiananmen Square.

“Falun Gong's teachings strictly forbid killing. How could a practitioner kill or commit suicide? I felt the videos were absurd. How could that be connected to Falun Gong? But the CCP just does that.”

A Movie Staged by the CCP

Why did the CCP stage the self-immolation to reinforce the persecution of Falun Gong? Lizhi explained, “When I saw the video the first time, the inmates and I thought we were watching a movie. At the time I did not think about why I thought I was watching a film.

“I thought it over later. If something like this happened in real life, the scene would be complete chaos. It would be impossible to have the videos zooming in and out, including close-ups, as in a movie. So the simple truth is that it was staged by the Party.

“One scene shows a plastic bottle between the legs of the man. His body was on fire, but the plastic bottle remained intact. There are many such inconsistencies. Everyone knew it was fake at first glance.

“This means that if you think about it carefully, it can’t deceive people. So after learning about the truth, many people actually regretted having misunderstood Falun Gong for so many years.

“After learning the truth of the staged self-immolation, many people changed their views and now have a good impression of Falun Gong.”

Prisoners of Conscience Tortured and Treated as Enemies of the People

“I was imprisoned for three and half years for mailing Falun Gong information to my colleagues,” said Lizhi. “The first day I was escorted to the Qianwei Prison, a police officer told me that imprisoned people were criminals and criminals were enemies of the people. Prisons are the state apparatus for violently subduing the enemy.

“Then the police used electric batons to punish me physically. It was in the freezing winter. I was tortured until I was extremely weak. I couldn’t move and developed a high fever, hemoptysis, and swelling and pain in my legs and feet.

“Once the higher-level administration sent someone to check the prison’s progress in forcing Falun Gong practitioners to give up their belief. Several other practitioners in the same ward and I said Falun Gong is a righteous practice and the persecution was baseless.

“The prison guards retaliated against us for telling the truth. They shocked us with three or four electric batons that gave off tens of thousands of volts. The police took me to the office, cuffed my hands behind my back, ordered me to sit at the foot of the wall, and started to shock me.

“Due to the high current, my body was knocked down as soon as the electric baton touched my skin, so the police shocked both sides of my body at the same time: my neck, left and right temples, back, arms, legs and other parts.

“The police ranted while shocking me, ‘You are against me! You do not listen to me! You make trouble for me!’

“After being shocked, my heart and kidneys hurt a long time. I was placed under strict management for a few months and was frequently deprived of sleep.

“In our hearts we practitioners know what Truthfulness-Compassion-Forbearance is and what cultivation is. Thus, the CCP’s persecution showed us how evil the Party is. We are truly good people and they are bad.

“No matter how evil the persecution becomes, the CCP cannot change our belief,” Lizhi said. “The worse they behave, the more clearly we see that practitioners are truly good and innocent people. They cannot accomplish their evil goals.”