(Minghui.org) Falun Gong practitioners are often seen near the Kamppi Center in Helsinki, introducing the practice and raising awareness of the nearly 22-year persecution of Falun Gong in China. Practitioners rang in the new year over the weekend of January 9, 2021, by talking to passersby about the health benefits of Falun Gong, a meditation and spiritual practice first taught in China in 1992. They also exposed the ongoing persecution of the practice in China, and how the Chinese Communist Party (CCP) imprisons and tortures practitioners who refuse to renounce their faith. 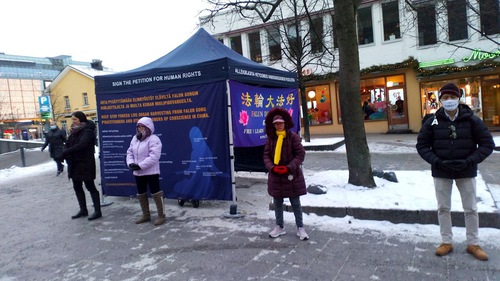 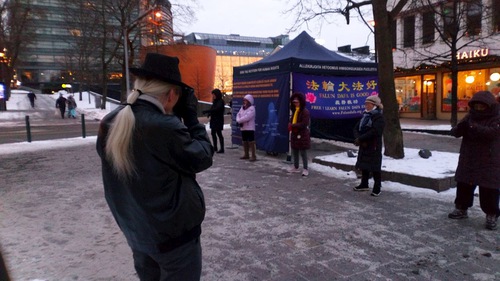 Falun Gong practitioners had a booth near the Kamppi Center in Helsinki on January 9, 2021, to talk to passersby about the practice, demonstrate the Falun Gong exercises and expose the ongoing persecution in China. 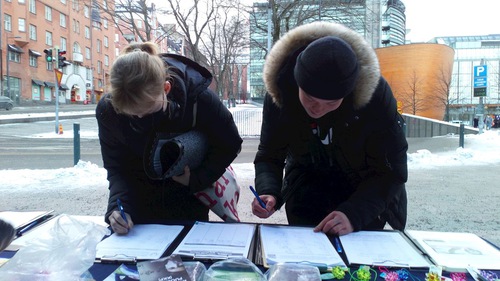 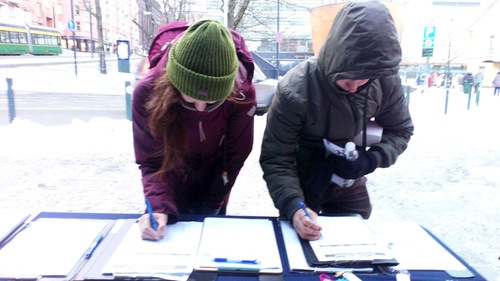 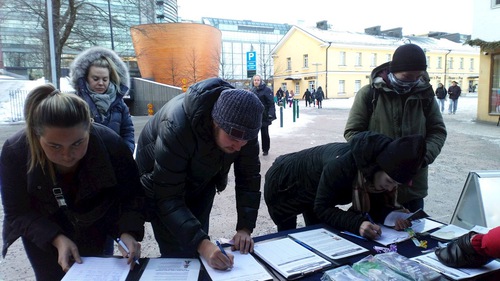 After learning about the persecution of Falun Gong practitioners in China, people sign the petition to dissolve the CCP. 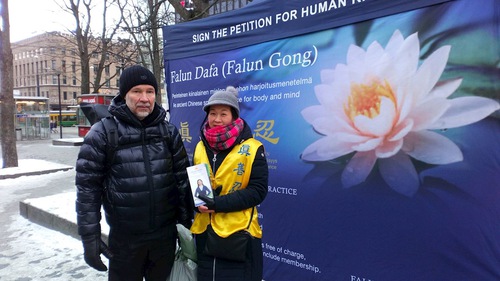 Dr. Tapani Vuola volunteered to spread information about the organ harvesting from living Falun Gong practitioners who are incarcerated for their faith in China.

Dr. Tapani Vuola greeted the practitioners after he came out of a shop, “Did you know that Helsinki and Beijing are sister cities? You should tell the Helsinki government that Beijing violates human rights and they shouldn’t be sister cities. You should talk to the members of the Finland Parliament.

“China is a dictatorial regime that disrespects human rights and freedom of belief. It persecutes Falun Gong and harvests their organs for transplant while they are still alive. China is the country that executes the highest number of prisoners,” he said.

Dr. Vuola had previously signed a petition to stop organ harvesting from living people. This time he signed the petition to dissolve the CCP. He took a photo with a practitioner and shared it on his social media. He wanted to spread information about organ harvesting among the doctors that he knows. 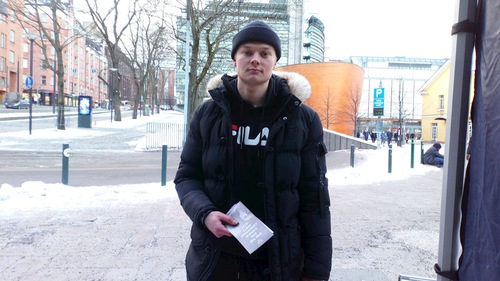 Elia, a salesperson, walked straight up to the practitioners' table and signed the petition. “Falun Gong is a kind of qigong. It’s about compassion, relaxing, and self improvement. China, under the CCP, is a totalitarian regime. I know that it has developed many social credit systems and uses them on its citizens. If they do something wrong or have the wrong ideology, their credit will drop. As a result, these people won’t be able to take out loans, they may lose their jobs, or they may not be able to travel,” said Elia. “We must speak up, otherwise these systems will be used on us one day.”

Before going on his way, Elia paid the practitioners a big compliment. “During the pandemic people are afraid [of making contact with the public], but what you are doing is great!”

Rimo, a businessman, stopped by the table and asked to sign the petition to end the persecution and the forced organ harvesting. “Human rights belong to everyone, including the Chinese people. Nobody’s organs should be harvested when they're alive. This is inhuman.” 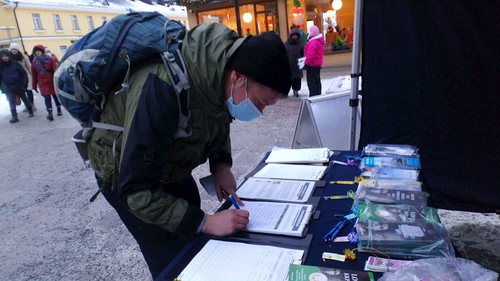 Petri signs the petition to end the persecution and dissolve the CCP.

Artist Petri denounced the organ harvesting and said, “Humans are not animals. This shouldn’t be allowed.” 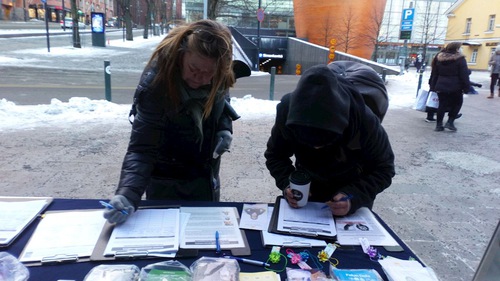 Laine (left) and her friend

Laine asked her friend to come over to sign the petition with her. “People’s organs should never be taken by force. It’s wrong, it's persecution, and it's terrifying.” She blamed the media for not reporting these crimes, and told the practitioners, “What you are doing is magnificent!”