(Minghui.org) Having spent 15 years in detention during the past 21 years, a Hegang City, Heilongjiang Province resident was arrested again in a police sweep for his faith in Falun Gong in mid-December 2020.

The police found a satellite dish when they ransacked Mr. Jiang Yunjing’s home. They then took him to the hospital for a physical checkup and collected his blood sample. He is being detained in the Hegang City Detention Center and the police threatened to sentence him to prison again.

Mr. Jiang took up Falun Gong, a mind-body practice based on the principles of Truthfulness-Compassion-Forbearance, in 1998. He was battling a serious intestinal problem at the time and was in really bad shape. However, he underwent a dramatic change after three months of practicing Falun Gong and became a complete healthy person. His character was elevated through following Falun Gong's principles of Truthfulness-Compassion-Forbearance. He no longer fought or competed with others and worked diligently at his job. His colleagues were surprised to see his changes.

However, since the Chinese Communist Party started persecuting Falun Gong in July 1999, Mr. Jiang has been subjected to brutal persecution for upholding his belief.

Before his latest arrest, Mr. Jiang, 52, has been given two years of forced labor and sentenced to thirteen years in prison for upholding his belief in Falun Gong. His father suffered a stroke due to the anxiety and fear from the persecution and died in 2001.

Mr. Jiang was 35 years old and his son was only seven years old when he was sentenced to prison in 2003. His imprisonment brought endless pain to his family. He spent the golden years of his life in prison and his son grew up without father’s care.

Mr. Jiang went to Beijing to appeal for justice for Falun Gong on July 23, 1999, but was arrested in Tiananmen Square. He was escorted back to Hegang. On the train back there, the police put him in handcuffs in front of other passengers to humiliate him. He was released after 15 days of detention.

Shortly afterward, he was arrested again and taken to Hegang City Second Detention Center. Since he refused to renounce his faith, he was forced to sit on the cold concrete floor and deprived of sleep for nine days. Despite the torture, he treated his cellmates with kindness and gained their respect.

Mr. Jiang was later given two years of forced labor and taken to Hegang City Forced Labor Camp. The inmates were ordered to torture him because he refused to give up Falun Gong. Once, he was forced to lie on the ground with his four limbs stretching out, and then the inmates beat him up with wooden blocks.

He was forced to do heavy labor work, such as carrying wood and construction work, but was not given enough food. Sometimes in the winter, he was only given frozen cabbage soup for meals. Only during “work days” was he given three meals a day, otherwise he only got two meals a day.

With a few months left on his term, Mr. Jiang was transferred to Suihua Forced Labor Camp, where he was brainwashed daily. His detention was extended by two more months after his term had expired.

However, just one day after his release, the police took him away again. He went on a hunger strike and was released 15 days later, when his life was in danger.

Later, Mr. Jiang was sent to Hegang City First Detention Center. He was handcuffed and shackled with a metal stick between his feet, and interrogated in a conference room. Sometimes, he was hung up by the wrists with other torture devices on during interrogation. The handcuffs cut into his flesh and caused severe pain. This kind of interrogation went six days before he was taken to a cell. One guard punched him in the ribs and caused tremendous pain. 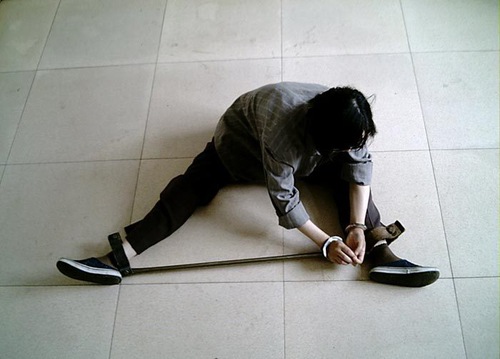 Torture illustration: Shackles with a metal stick between his feet

The guards kept the shackles on him for three more months until he held a hunger strike for seven days. During the hunger strike, he was brutally fed with salty corn porridge, which burned his stomach.

No matter how badly the guards tortured him, Mr. Jiang always responded with compassion and never fought back. His cellmates learned about the goodness of Falun Gong from him and a couple of them even started the practice.

For doing the Falun Gong exercises, one of the inmates was punished with handcuffs and shackles with a metal stick on for half of the month. He said, “I used to be a bad person committing crimes. But now why am I being persecuted for becoming a better person?” After finding that the inmate was determined to learn Falun Gong, the guards extended the torture against him for another 15 days.

Mr. Jiang was sentenced to 13 years in early 2003 and taken to Mudanjiang Prison later. During his prison term, he refused to do labor work or answer roll call, wear the prisoner's name tag, or cooperate during brainwashing sessions. Therefore he was punished with four periods of confinement in dark, damp small cells with bad air circulation and no bedding. Two out of the four times, his hands were handcuffed to shackles fixed to a floor ring, such that he could not straighten his back, but sat with his back bowed. Each small-cell punishment lasted for 15 days.

On his scheduled release day in July 2015, instead of allowing him to go home, the authorities deceived his younger siblings into signing an agreement. The agreement gave them the right to take Mr. Jiang to a brainwashing facility directly from prison. He was forced to watch videos defaming Falun Gong and write repentance reports every day. A guard also shocked him with electric batons on his face and chest. He was released a month and a half later.