(Minghui.org) Peter Westmore, former president of the National Civic Council (NCC) in Australia, wrote a book review in the August 8, 2020 issue of News Weekly. He reviewed The 20-Year Persecution of Falun Gong in China from the Minghui Publishing Center and highly recommended it to libraries as well as government officials. 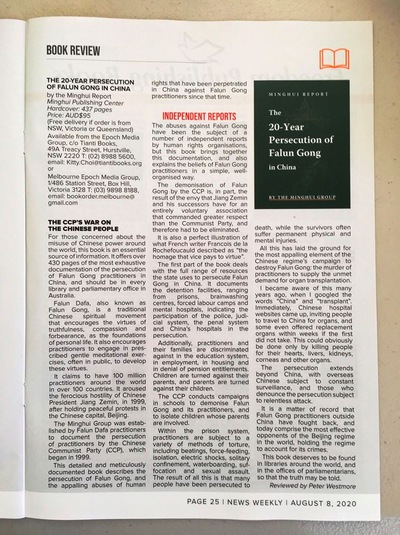 Book review by Peter Westmore in News Weekly on August 8, 2020

Falun Gong is a spiritual system that focuses on the principles of Truthfulness-Compassion-Forbearance. It has been persecuted by the Chinese Communist Party (CCP) since July 1999.

The practice “encourages practitioners to engage in prescribed gentle meditational exercises, often in public, to develop these virtues.” wrote Westmore in his review with the title of “The CCP’s War on the Chinese People.”

There are about 100 million practitioners in more than 100 countries. Former CCP leader Jiang Zemin ordered the persecution of Falun Gong in July 1999 and the suppression of innocent practitioners has been going on since then.

The Minghui Group was established by Falun Gong practitioners to document the persecution.

There have been numerous reports from various human rights organizations on the persecution, “but this book brings together this documentation, and also explains the beliefs of Falun Gong practitioners in a simple, well-organized way.”

The book also explained the cause of the persecution. “The demonization of Falun Gong by the CCP is, in part, the result of the envy that Jiang Zemin and his successors have for an entirely voluntary association that commanded greater respect than the Communist Party, and therefore had to be eliminated,” Westmore wrote.

The book documents how the CCP mobilizes the state apparatus to suppress Falun Gong. This includes “detention facilities, ranging from prisons, brainwashing centers, forced labor camps and mental hospitals indicating the participation of the police, judicial system, the penal system, and China’s hospitals in the persecution.”

If these were not enough, forced organ harvesting is another crime against practitioners. Transplants with extremely short wait times “could obviously be done only by killing people for their hearts, livers, kidneys, corneas and other organs.”

With the persecution happening both inside and outside of China, this book serves as a record “holding the regime to account for its crimes.” Therefore, the book “deserves to be found in libraries around the world, and in offices of parliamentarians, so that the truth may be told.”