(Minghui.org) Editor’s note: The city of Wuhan in Hubei Province suddenly caught the world’s attention when the coronavirus broke out in late 2019 and soon spread to almost every corner of the world. While many people now know Wuhan as the epicenter of the pandemic, it is also one of the epicenters of the persecution of Falun Gong, a spiritual and meditation discipline targeted by the Chinese Communist Party since 1999.

For telling people about the persecution of Falun Gong, I was arrested in late 2019 and detained in the Yusunshan Brainwashing Center in Jianghan District of Wuhan for a month. 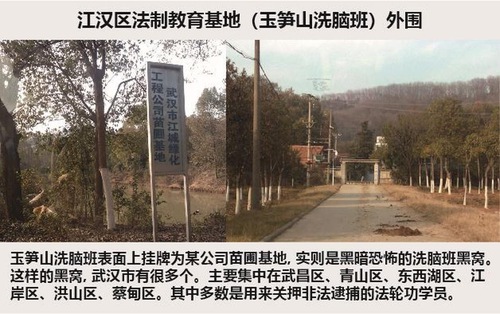 The top of the picture reads, “Outside View of Jianghan District Legal Education Center (Yusunshan Brainwashing Center).” The sign reads, “Wuhan City Jiangcheng Gardening Company Nursery.” The bottom reads, “Yusunshan Brainwashing Center has a sign that indicates it is a nursery when in fact it is a dark den for brainwashing [practitioners]. There are many such brainwashing facilities in Wuhan, most of which are in the districts of Wuchang, Qingshan, Dongxihu, Jiangan, Hongshan, and Caidian. Most of the brainwashing facilities are used to detain Falun Gong practitioners.”

The brainwashing center is located in a remote mountainous area away from Wuhan City. The center is a three-story building, and on the second floor there are eight rooms used to detain Falun Gong practitioners. Inside each room are three beds, one for the practitioner and two for the “collaborators.”

The collaborators are assigned and paid for by the practitioner’s employer or community officials to monitor the practitioner around the clock. They receive about 3,000 yuan in salary each month, and their job is to prevent the practitioner from doing the Falun Gong exercises or leaving the cell. There are two cameras inside each cell and another two outside in the hallway.

The brainwashing started at 9 a.m. every day. The practitioners were forced to watch videos slandering Falun Gong or talk to the “educators.” The educators could be school teachers, medical staff in public health, or retirees from the justice or legal departments. In the afternoon we had to write reports on what we learned that morning.

The brainwashing center administered nerve-damaging drugs to practitioners who refused to renounce their belief several days into brainwashing. After I was given the drug, my temples swelled to the size of an egg and I had extreme headaches. My eyesight blurred, my memory declined, and I had blackouts. I spoke involuntarily, snored loudly, and was slow to respond.

It has been over six months since I was released. My memory still isn’t nearly as good as it used to be, and I can’t sleep through the night without waking up frequently.

Almost all practitioners locked in the brainwashing center were given nerve-damaging drugs. The authorities check the practitioners' temperature, blood pressure, and pulse every day at 7 a.m. and 5 p.m. to ensure that they do not die under their watch.

Some practitioners might have been given nerve stimulants. They became irritated and had headaches and chest pain. Their heart rate and blood pressure went up. They couldn’t remember things and became overly excited as they involuntarily sang, danced, and talked nonsense.

Most of the practitioners were placed in the brainwashing center for over a month. They were required to “criticize” Falun Gong, and their thoughts reports had to be approved by the head of the local 610 Office (an extralegal agency created by the central Communist Party leadership to persecute Falun Gong) before they were released.

I got home around noon the day I was released. I had excruciating pain in my right kidney and couldn’t straighten my back. That night, my left kidney began to hurt, too.