(Minghui.org) Today's news from China includes incidents of persecution that took place in 12 cities or counties in nine provinces, where at least 15 practitioners were recently persecuted for their belief. 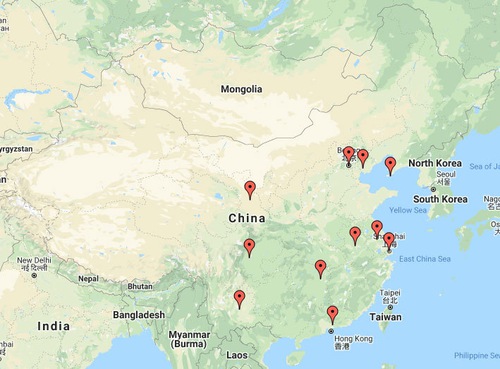 Mr. Ma Zhenyu, a former radar engineer of the 14th Research Institute of China Electronics Technology Group Corporation, was arrested on September 19, 2017, and given a three-year prison term. He is incarcerated in the Suzhou Prison.

Guards instructed criminal inmates to get him to renounce his belief. Mr. Ma was forced to sit on a small stool for long periods of time, and was deprived of sleep. He was often beaten by the inmates when he dozed off.

Mr. Ma was previously sentenced to a seven-year prison term.

Ms. Xian Mingzhen, Ms. Zeng Qingxiu, and Ms. Li Fangling from the Longquanyi District were arrested by plainclothes officers on the morning of May 26, 2020. Their homes were ransacked.

Ms. Li was released later that evening, and has been living under surveillance. Ms. Zeng and Ms. Xian were taken to the Chengdu City Detention Center.

Ms. Guo Xiulan and her husband Mr. Yang Baozhu from Changping County were arrested at the Shuitun Market by plainclothes officers who were staked out there on May 3, 2020. Their home was ransacked, and a laptop and Falun Dafa books were confiscated.

The couple were taken to the Changping District Detention Center, and have been officially placed under arrest.

Ms. Sun Li was arrested at an elderly practitioner’s home by plainclothes officers from the Dongyao Police Station on the morning of May 31, 2020. Her car was impounded.

Ms. Yang Shuxian, 79, a professor at the Kunming University of Science and Technology, was arrested by officers from the Wenlin Police Station on May 13, 2020. Her personal belongings were confiscated.

Ms. Yang was taken to the Kunming City Detention Center, but they refused to accept her due to her poor health. She was released on bail.

Ms. Hu Haiyan was arrested by officers from the Beichen Delta Police Station on May 18, 2020. She has since returned home.

Ms. Yan Ping from Boluo County is being held in the Meihua Detention Center in Luoyang Town.

Ms. Tang Juzhang was arrested on May 29, 2020. She was held in the Hubin Hospital, Feidong County, but was later taken away. Her whereabouts are unknown.

Ms. Zhou Lin from the Pudong New Area was arrested by officers from the Pudong Domestic Security Division on the morning of June 1, 2020, for distributing Falun Gong materials. She is being held in the Zhangjiang Detention Center.

Mr. Li Yubao, in his 60s, from Gaowan Township, Jingyuan County, was arrested in late April 2020. He is still being held in the Jingyuan Detention Center.

Mr. Deng Daoheng was sentenced to an eight-year prison term on January 9, 2020. He appealed to the Dazhou City Intermediate Court, but the judge kept denying his lawyer from having access to Mr. Deng's case.

The judge upheld original verdict in late April without informing the lawyer. He also refused to provide a formal written verdict to his family and blocked his family from visiting Mr. Deng.

Mr. Deng was taken to the Jiazhou Prison on May 29.