(Minghui.org) Falun Gong practitioners held banners in front of the Chinese Consulate and in Chinatown in Houston, Texas, on April 24 and 25 to mark the 21st anniversary of April 25 appeal.

Texas began to gradually reduce restrictions during the coronavirus pandemic on April 20. Practitioners were given a permit from the city government and the police department for the event on the condition that everyone participating would wear face masks and keep at least six feet apart.

Many cars passed by the Chinese Consulate and Chinatown during the activities. Practitioners' banners drew the attention of the drivers and passengers in the passing vehicles. Many people took photos or videos. Some drivers honked their horns in support and gave practitioners a thumbs up.

A practitioner named Ms. Chen said many people accepted fliers and some paused to listen to her explain the significance of the activities. Some Chinese people renounced the Chinese Communist Party (CCP) and its affiliated organizations on the spot. 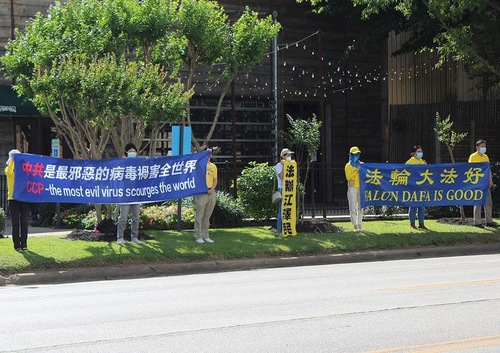 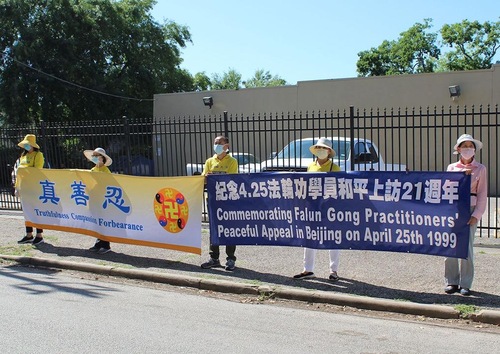 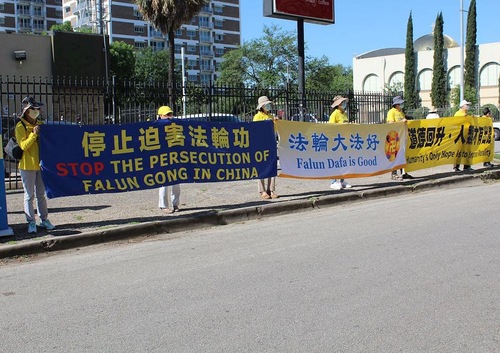 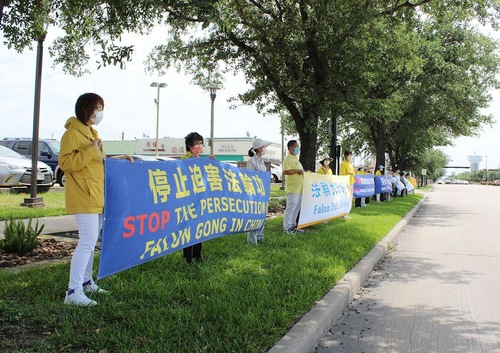 A practitioner handed a flyer to Ms. Hou, a Chinese woman who was passing by, and explained more about Falun Gong to her. Ms. Hou said she was from Taiwan. The practitioner then told her about how widespread Falun Gong has become in Taiwan: over 10,000 people are practicing Falun Gong, and practitioners have formed massive Falun emblem formations and Chinese characters, and other activities.

“I want to learn Falun Gong,” Ms. Hou said. She explained that she often watches NTDTV programs and watching the programs helped to change her world view in many ways. During the pandemic, she has thought a lot about life and felt that practicing Falun Gong would be the most impactful and important thing.

She requested the book Zhuan Falun, the main book of Falun Gong. She was happy to receive it from a practitioner.

A Passerby: The CCP Will Collapse Sooner or Later

A Chinese man who wished to remain anonymous expressed his views in front of the consulate. He said he had been misled by the CCP's propaganda about Falun Gong, but through the coronavirus pandemic, he had realized the evil nature of the CCP and changed his views. He said Falun Gong is good and the CCP is evil.

He said that the CCP will collapse sooner or later. He also said he enjoyed the media reports from the Epoch Times and NTDTV.