(Minghui.org) People from all over California continued to rally in Sacramento on December 5 to express their objection to election fraud and to defend the U.S. Constitution. 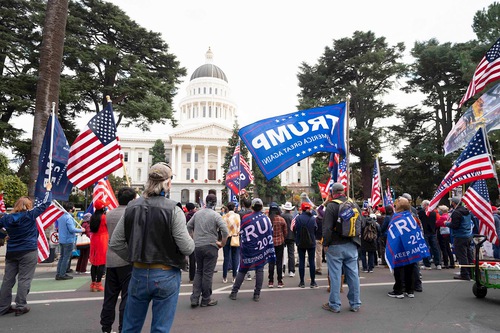 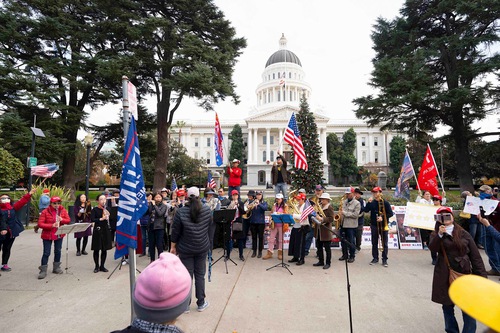 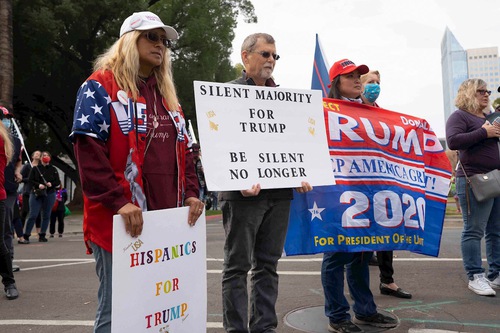 Crowds gathered in front of California's state capitol building at noon on Saturday. They waved banners calling to “Stop the Steal,” referring to election fraud in the 2020 general election. Antifa members attempted to provoke violence by throwing explosives, smoke bombs, eggs and paint at the demonstrators. The scene was chaotic for a while. Antifa members also smashed the windows of at least twelve cars. Police are investigating these crimes.

Ms. Zhang from China said she had joined the rally every week. “This election is not just an American issue—it affects the entire world,” she said.

“The Chinese Communist Party’s (CCP) infiltration into America is terrible. We came here from China for freedom. But now it appears that freedom in America is under huge threat, so I came to support President Trump.”

She said, “The CCP regime is evil. It brainwashes everyone from birth. After I traveled outside China, I realized I had been deceived. After living under that regime, I know the CCP always deceives the public.”

She said Chinese people are not safe in China and they live in fear. She said she dared not to be photographed during the rally because she was afraid her family members in China would be persecuted for her involvement.

“The CCP dictatorship is too evil! I hope the CCP collapses soon. China will be better without the Party.”

She said she supports Trump “because President Trump fights for America. He is sincere and altruistic. I support his views on traditional values. He keeps his promises. I hope he will arrest those committing election fraud.”

She said in school, teachers tell students not to cheat and that America is a free country. “But I did not think America would become like this. The mainstream media doesn't even cover President Trump’s speeches. I am very disappointed. The so-called mainstream media is an accomplice of this election fraud.” 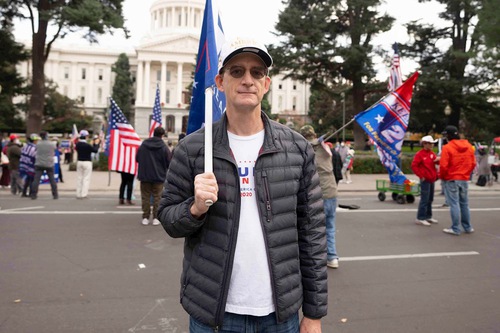 Stockbroker Eric Paradise said he joined the rally every weekend. “If we don’t fight for freedom, the CCP will harvest our children’s organs just like they harvest organs from living Falun Gong practitioners. We need to ensure this doesn’t happen here,” he said.

He condemned the CCP’s human rights violations and live organ harvesting. “The CCP assisted the Biden family and corrupted and coerced him this way. If Biden wins, he will have to listen to the CCP. Once the Party controls America, it will do whatever it wants. Within one generation, the CCP will harvest organs from American people for the Party elites. This is happening in China.”

Paradise said righteousness and evil have opposed each other in human history. In this election, he said President Trump represents the Constitution and protects basic rights while his opponent represents the leftists and extreme corruption. He said they’re trying to steal the election with fraud and that the election is a fight between good and evil. He said that he is confident President Trump will be re-elected.

“If America falls, there's no hope for the world” 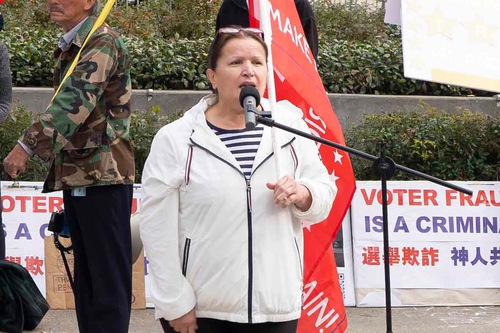 Originally from Hungary, Casey Nowak said some rally attendees came from communist countries—some from China, others from Cuba–to seek freedom in America. “If America becomes a socialist country, where will people go?” she asked.

“We must fight for freedom. If America falls, there's no hope for the world,” she said. “America is a land of freedom and the leader of the free world. The world looks to America. If there's election fraud, we must stop it.”

She said this is the last hope for people to fight for freedom. “If we do not stand up, we'll be deprived of our rights, our freedom of speech.”

“I came here to support Trump’s re-election and stop this election steal. I support American values and I don’t want America’s values to be stolen by corrupt politicians.”

“Facing the Largest Voter Fraud in U.S. History, Trump Says “Now Is Not the Time to Retreat””

“We Should Cultivate Ourselves Proactively and Not Miss Another Historic Opportunity”