Some Thoughts on the Soaring COVID-19 Death Toll Since the U.S. Election

(Minghui.org) The death toll from COVID-19 showed a significant increase around the world after the U.S. general election. On November 3, the election day, the total death toll (not including China) was 8,232. The next day, the number increased to 9,235. Since then the death toll has continued to climb, with the most deaths on December 16, at 13,696.

Although we cannot exclude other factors, such as China's under-reporting, possible exaggerated numbers in the U.S., and other statistic problems, we assume these factors do not pose major issues in our analysis.

The following graph shows weekly new cases and the death toll in the U.S. from July 14 to December 13, 2020, based on data from CDC COVID Data Tracker. The top chart shows the new cases and the bottom one shows the death toll. One can easily see an overall upward trend after the election week. This has led us to explore what could be the connection between the COVID-19 pandemic and the US election. 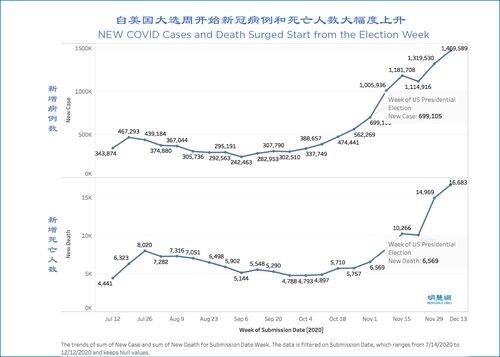 How Did Lockdown and Mask Mandate Contribute to Pandemic Control?

In addition to vaccinations, the currently accepted methods to control the spread of the virus are practicing social distancing and wearing masks. One might assume, from a scientific perspective, that the re-opening of many areas caused the recent surge.

However, according to the data compiled by Yinon Weiss, an entrepreneur, Harvard MBA, and army special forces veteran, it is not necessarily so.

The following three graphs published on Yinon Weiss’s Twitter account showed that after lockdown and imposing mask mandate, the case numbers did not always decrease as expected. 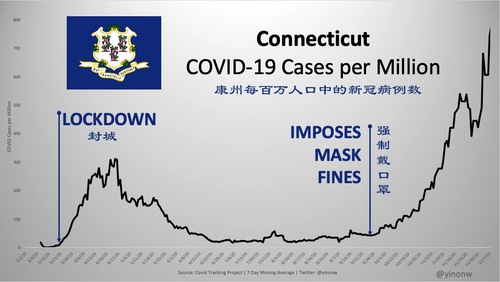 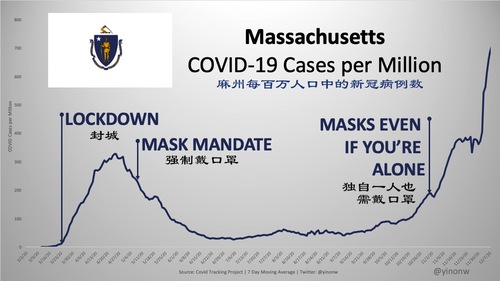 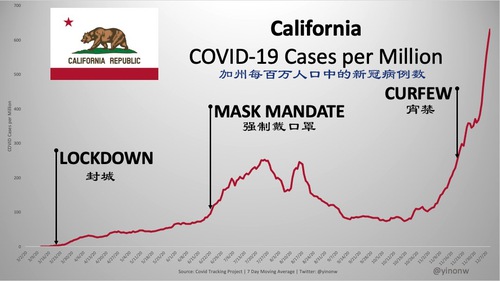 Cases in California continued to climb after lockdown and mask mandate, then increased even more quickly after curfew. (Image credit: https://twitter.com/yinonw)

On the other hand, Florida ended nearly all restrictions in September, but the number of COVID cases did not increase like Connecticut, Massachusetts, and California (see the image below) 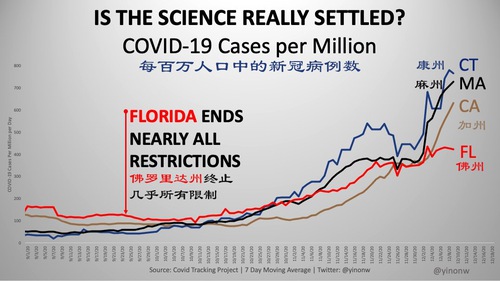 Cases in Florida increased at a slower pace after restrictions were removed, compared to Connecticut, Massachusetts, and California. (Image credit: https://twitter.com/yinonw)

Some people also asked whether the surging cases were related to population. According to the 2019 population record, California is the most populated state, followed by Texas and Florida. It’s known that New York, with its fourth-largest population, has the highest coronavirus mortality in all the states despite its strict controls to fight the pandemic – even much higher than California and Texas. So it seems that the cases aren’t entirely related to population. 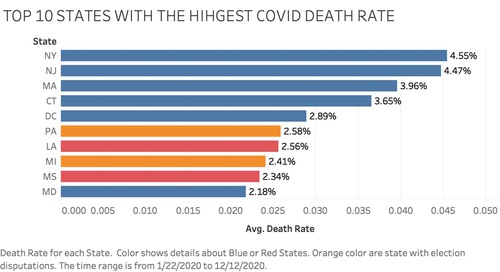 Among the states with the most COVID fatalities, New York has highest death rate.

We know that most respiratory diseases are more rampant in the winter than in the summer. As our immune systems slow down in the winter and the virus is more stable with lowered humidity in indoors, it’s easier for people to get sick.

When the pandemic started last January in the U.S., some say it would be over by the summer when people’s immune systems were more active and the higher summer temperatures could kill the virus. But as it turned out, the pandemic did not disappear with the arrival of summer.

On the other hand, when we look at cases in California, where the temperature variation throughout the year is small compared with other places, it’s interesting to see the surge in mid-summer, which wasn’t present in Connecticut or Massachusetts. 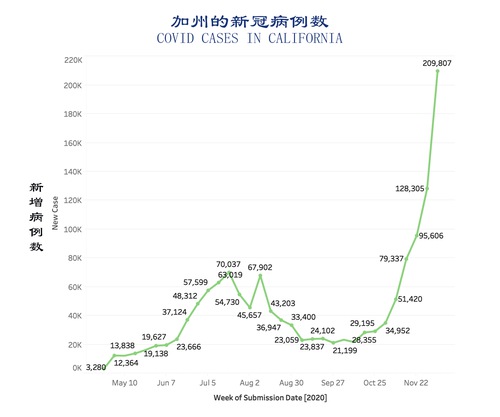 California has a surge in the summer and another peak since November.

So why did the COVID-19 death toll suddenly increase after the U.S. elections? Is there a connection between the two?

In the figure below, we further compared new COVID-19 cases in red states (which Trump won) and blue states (which the other candidate won), not counting the six battleground states: Nevada, Arizona, Wisconsin, Michigan, Pennsylvania, and Georgia. And we made the interesting finding that the growth rate of coronavirus cases in red states became lower than the blue states about one week after election day. 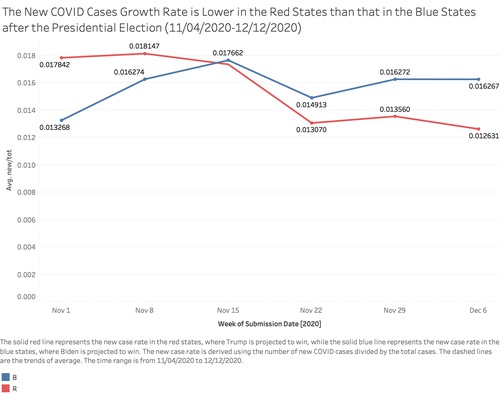 New COVID cases grew at a slower pace in red states than in blue states after U.S. election.

So why is the case? Maybe some wisdom from traditional Chinese culture can provide some insight.

In ancient times, it’s believed that pandemics are related to the degeneration of people’s morality. From emperors to the general public, they repented when disasters arrived and sought exoneration from heaven.

This time, when the whole world is being hit hard by the unprecedented pandemic, it might be an opportunity for each of us to take pause from our busy daily lives, reflect on ourselves, and search for the answer internally.

While Trump’s legal team is still trying to make their case in courts, more and more pieces of evidence have surfaced, pointing to interference in the U.S. election from the Chinese Communist Party. Some people said the election was no longer a contest between two candidates, but a choice of two ideologies, communism vs. free world.

Humanity is at a historic moment. In the face of the imperious pandemic and the uncertain future of the world, perhaps morality and conscience can help people understand what has been going on and take the correct action. It is the most basic of all.

Conscience is bestowed by the heaven and an innate trait everyone has. One doesn’t need a degree or use any scientific method to develop conscience, which also has nothing to do with one’s color, wealth, or social status. We are born with conscience. But if one’s conscience falls asleep, then one is lost, something very serious. When disaster strikes, conscience is what saves a person, as long as one’s conscience stays awake.

“Recommending the Nine Commentaries to Our American Friends”

“After Suffering Six Years of Incarceration and Relentless Torture, Henan Woman Arrested Again for Her Faith”