Trump’s lawyer Rudy Giuliani urged the Arizona state legislature to exercise their Constitution power to protect the election’s integrity. President Trump also called in and thanked everyone present for their participation. He called the 2020 presidential election “the greatest scam ever perpetrated on our country.” He said he won’t be focusing on another election in 2024, but will keep fighting to get things straightened out for this election. 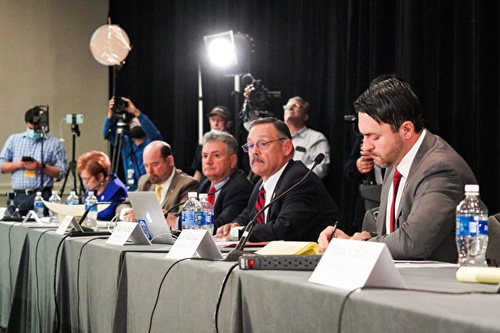 Socialists Undermine the Country for Their Own Interests

He said the truth is being uniformly censored by big tech, big media and the democrats. And there are also people who are aware of the facts, but didn’t want to face it. They told him, “Don’t show us the facts. We’ve decided already. That this is a free and fair election. It was done perfectly. Please don’t interrupt that narrative with the truth.”

“But we are going to interrupt that narrative with the truth,” said Giuliani.

He also thanked the state representatives for their courage to do this. “I don’t think most people realize the kind of harassment, threats, horrible things they said to you for doing this.”

He gave an example of an important lawyer, who was working on a major case in their team, was threatened with job termination by his law firm if he represented the president of the United States.

Giuliani commented, “If that isn’t a censorship, if that isn’t a form of despotism, and a distortion of values of our country. I don’t know what it is.”

He said that the censorship problem has been going on for some time. While it has been slowly changing the U.S. in the past decade, the pandemic nevertheless fully exposed left-wing socialists, including governors, congressmen, senators, to move into socialism.

He said socialism “is an old idea, not a new idea.” and “authoritarianism is always the end result.” The elites always think they know better. What’s going on in the U.S. resembles what has happened in Russia, Poland, Bulgaria, and east Berlin, and is still happening in China.

When the substantial crime of the Biden family was revealed in the hard drive, the truth was censored by the big media and big tech companies. It was not allowed to be shown, not on television or newspapers. Even though the fact is, millions and millions of dollars from China, Russia, Ukraine and Romania has gone to the Biden family.

“As soon as the election moved into the questionable stage. Same practice was used. Cover it up, cover it up, cover it up. Big tech, big media, crooked democratic leaders, big businesses that profits from the system, the way it operates right now. Their desire is not to make America first, but wherever America should be put, so they can make a profit.”

“They have no sense of how important this country is to the really, the survival of the world as a decent place. There is no other country that puts its men and women’s lives at risk to save other people. That country doesn’t exist on earth. It’s us. And if we destroy the essential nature of this country, the world is in for a terrible period of time.”

Mail-in Ballots and Absentee Ballots the Center of the Conspiracy

Giuliani held that there was a conspiracy surrounding this election, hatched by the very top of the democratic party.

He emphasized that 99% of democrats are still honest and decent people, who don’t cheat, steal votes or sell public office. But the very, very top of the democratic party has been corrupted badly since Clinton’s presidency. And it’s carrying itself through, and the head of that corruption hasn’t been cut off yet.

He explained that the election conspiracy is centered on mail-in ballots and absentee ballots. People have been warned in twenty years, including by president Jimmy Carter, many experts, both republicans and democrats, that having major mail-in ballots would cause tremendous, very dangerous fraud in the election.

When people use election machines, maybe they can still pick up the fraud by examining the traces left in the machine. But for mail-in ballots, “once the envelope is separated from the ballot, it’s gone forever. You will never know how to connect the fraud.”

If there were a few thousand mail-in ballots, there wouldn’t be much room for massive fraud. But when there are 2.5 million mail-in ballots, people could expand it to 3 million, or 3.2 million. Or they can count it four or five times in a machine. There is plenty of room for cheating.

Giuliani also said that in this election, it’s not only people in Arizona whose right to vote was taken away from them, but also people in Pennsylvania, Michigan, Wisconsin, Nevada, and Georgia. “If your right to vote is being taken away, so is mine.”

State Legislators Encouraged to Stand Up to the Invasion

On the day of the hearing, November 30, Arizona secretary of state certified election results. Kelli Ward, chairwoman of the state Republican Party, immediately filed a legal contest, requesting that “the Court declare that the certificate of election of the Biden electors is of no further legal force or effect.”

Arizona state Representative Mark Finchem told reporters during the hearing, “We are clawing our Electoral College votes back, we will not release them,” and “That’s what I’m calling on our colleagues in both the House and Senate to do—exercise our plenary authority under the U.S. Constitution.”

He emphasized that, “There is a legal brief out there that says we are not tethered to state statute when it comes to this one question.” He said they were working to have a resolution “within the next 24 to 48 hours.”

Giuliani echoed Finchem and encouraged the Republican state legislators that they didn’t have to wait until the voting system is changed before taking action. “You don’t have to endure a phony election and the biggest voter fraud in our history, and end up with it, tainted election and go down in history, as the country didn’t have the courage to deal with it.”

He encouraged the legislators to “stand up to the invasion of our religion, our freedom of speech, and right to a fair and honest count.”

Giuliani said, “Anyone who stands by and let it happen, maybe you are not committing a crime, but they’ve lost the sense of what it means that we have to fight to protect our values and our rights. Because there are always people both externally and internally who want to take them away. And I’m gonna ask you to fight.”

“I’m gonna ask you to try to implore the other members of your legislature to stand up to this. Do not be bullied. Do not be frightened. Your political career is worth losing, if you can save the right to vote in America.”

“The Constitution of the United States says that, you, the legislature of Arizona, have the plenary power to regulate this election of electors in the presidential election. It’s your Constitutional power, solely, you don’t share with anybody. The Supreme Court had said you can change that (state electors) and take that power back anytime you want to.”

“What is the right count? Or how could we get as close to the right count as possible? If we can, then have the courage to select that person to get the electors. Because that person won the honest vote and every dishonest vote disenfranchises the decent people who cast an honest vote. Have the courage to do that. In history, I swear to God, you will be heroes. If you can’t make a determination, then don’t certify it.”

He said twice, “I don’t see any decent and honest person could let this happen.”

At the end of his speech, he said that both Churchill and Reagan are his heroes. “Now our new president, who has been my friend for 30 years and I always knew he will be a good president, didn’t know he will be a great president. That’s the reason why they want him out so badly. Because he threatens them with destroying the corrupt system they have been enjoying in Washington since Bill Clinton got there.”

During the hearing, Phil Waldron, a cybersecurity expert and retired army colonel, said that Dominion’s manual had instructions teaching users how to connect the machine to the Internet and it was indeed found that the voting machines in several states were connected to the Internet during vote counting.

Anna Orth, a poll observer in Pima County, told the legislators that “I was having to allow people to vote who literally had just moved here. A large percentage had addresses from two apartment complexes.” She added that “many” of these individuals were “residents for not more than a month.”

Orth also said that she was refused to observe how problematic ballots were being duplicated. She estimated that approximately “2,000 ballots” were duplicated in that way.