(Minghui.org) As the result of the 2020 U.S. election remains pending, many supporters of both presidential candidates are also actively participating in various events. From video footage of these activities, one can see lots of differences between the two camps of supporters, including the culture and future that they represent.

Peace and Rationality vs. Extremity and Violence

Netizen Jack Posobiec posted a video on Twitter, in which a young couple was surrounded, sworn at, and poured water on for supporting Trump. Nonetheless the couple remained calm and did not fight back.

In contrast, in the parades that supported the democratic candidate, there were many communism supporters, LGBT, and BLM advocates. One transgender called out “I am finally relieved!” In the parade, there was also a naked woman who casually took pictures of others.

One can imagine that, were the democratic candidate to become the next president, there would be many laws to support transgender bathrooms, marijuana legalization, free injections of drugs, legalization of underage prostitution, government-funded programs for child transgender surgery without parental consent, and more.

Tens of thousands of people gathered in Washington D.C. on November 14 to support Trump. One participant wore a jacket with the words, “I’d Rather Get Covid-19 Than Biden-20.” 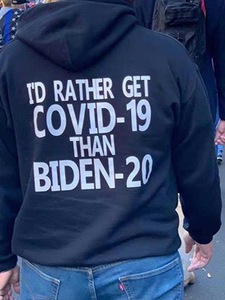 Jacket worn by a Trump supporter during the event in Washington D.C. on November 14.

The words on the jacket may sound irrational at first glance, but they likely reflected a deeper belief of safeguarding the American values protected by the Constitution. Protesting the election fraudulence in public may risk catching the virus, but having the wrong person being the next president may risk ruining America's future with socialism agendas.

The jacket wearer’s determination to seek what’s best for America was echoed by Hong Kongers who participated in the democratic movements in protest of the the Chinese Communist Party’s (CCP) tightening grip of the semi-autonomous region.

Influenced by the CCP, people in many countries have been misled by the socialist ideology. Trump has stayed firm with traditional values and taken many initiatives to counter the CCP, which earned him trust from people, who not only attended events before the general election, but also recent activities that called to investigate election fraud.

Difference in Infection Rates Between States

Aside from behaviors, supporters of two candidates also differ drastically in health conditions, including casualties related to coronavirus. After its initial outbreak in Wuhan, China late last year, the pathogen spread quickly as a result of the CCP’s consistent cover-up and disinformation. The Epoch Times therefore calls it the CCP Virus. 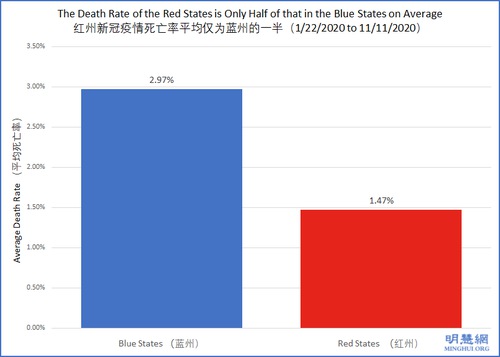 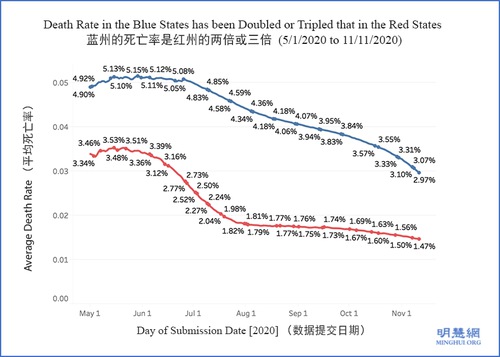 Across history, people who cherished traditional values were usually blessed with health and prosperity, while those that deviated from these faced consequences.

Falun Dafa, also known as Falun Gong, is a meditation system based on the principles of Truthfulness-Compassion-Forbearance. Since the CCP launched a nationwide campaign against the practice 21 years ago, Falun Dafa practitioners have been working hard to raise awareness of the persecution. After the CCP virus broke out, practitioners have also been telling people how the CCP has been using the same deceptive tactics in handling the virus as in its suppression of Falun Dafa.

Mr. Li Hongzhi, founder of Falun Dafa, recently published a poem on Minghui with a title of “On the General Election”:

In this majestic universe, the communist devil is making troubleFraud and corruption are harming a great nationAll the machinations make people only more despondentWhen will justice be upheld and our conscience restored?

If history is any indication, we believe that those who opposed “fraud and corruption” in the election will be blessed.