Voices from Michigan: Thank You President Trump for Saying No to the Chinese Communist Party

(Minghui.org) Hundreds of thousands of people from all 50 states gathered on Freedom Plaza in Washington D.C. on November 14, 2020, to support President Trump, protest the election fraud, and call for election integrity. A simultaneous rally was held that day in Michigan, one of the “swing states” in this election. Thousands of people from various counties and cities gathered in Michigan's capital Lansing, to peacefully express their support for President Trump.

Even though the outcome of the 2020 U.S. presidential election remains unclear, the opposing party has declared their candidate “president-elect”. It's been discovered that many counties in Michigan experienced vote-counting issues. Several votes for Trump were counted for Biden by the software. Every weekend since the election people have peacefully gathered in front of the Michigan State Capitol building to protest this election fraud.

Rally participants said that they came to “Ensure that our voices are heard,” and, “We will not be silent and let evil win.” Others expressed their disappointment with the so-called “mainstream media” and condemned their false reports as “dividing the nation.”

“President Trump Says No to the Communist Party!”

Mrs. Tewa Koernke said, “Chinese communism tries to impose or infiltrate their ideology on every country. This will only make the world worse. I think President Trump’s policies have performed very well!” Her husband Eric Koernke said, “I don’t trust the Chinese Communist Party or any country’s Communist Party. It is very good that President Trump is willing to fight for us and say no to communism.” 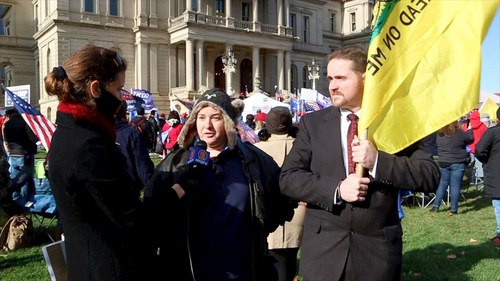 Dwayne Dimet and Marty Dimet said, “For many years, the CCP has been stealing our technology and transferring manufacturing out of the United States. The United States has given too much to the CCP. It's time to stop! President Trump has done many things and solved many problems like this. We think he is the most effective president in history!” 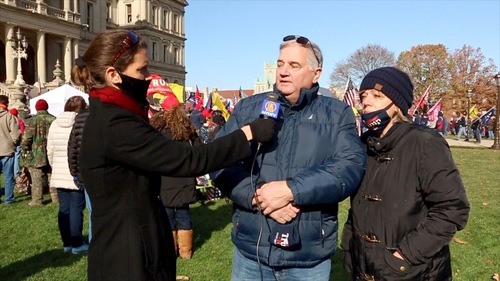 Jazmine Early, an architect from Colombia, is also a community leader in Macomb County. She said, “I love my country and I see that this country’s freedom and beauty will disappear at the hands of the Communist Party. So I came here to prevent this from happening. President Trump’s policy of staying away from communism is great, and I am very supportive. I have friends from communist countries who fled there and came to the United States.” 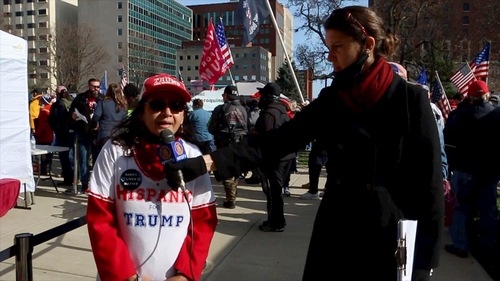 Pastor Philip Smith said, “The Chinese Communist Party is corrupt. We know that they have been exerting influence on American issues using money. They did a lot of bad and evil things. They enslaved and persecuted Chinese people, and they don't bother covering up their crimes. I think President Trump’s policies have contributed immensely to the United States. The American people are the biggest beneficiaries of all the things he's done—tariffs, trade agreements, etc., and I am thrilled that these are all connected with President Trump!” 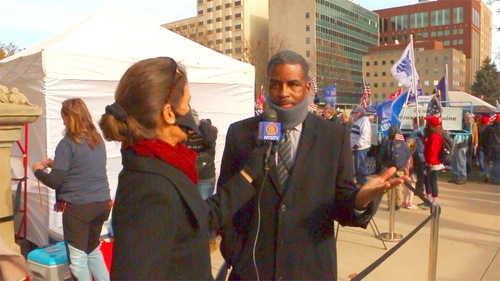 Laila Humphrey said, “I came here hoping that our conservative and traditional people will work together to stop the corruption of the leftists. We don’t need communism or anything related to it. President Trump is stopping communism and draining the swamp of corruption, and he has been doing well. This is why the people on the left are annoyed.” 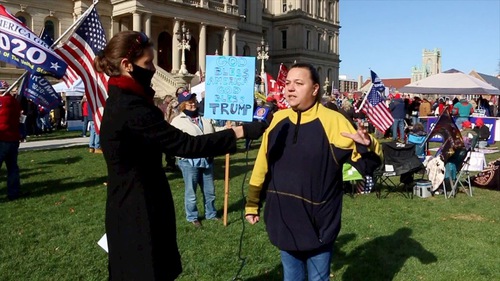 Susan Runyon said, “I’m disappointed with the mainstream media. They only tell us what they want us to know, and nothing else.” Preston Runyon agreed and said, “Yes. I feel the same. The mainstream media have been spreading dangerous messages to the public. This will only cause friction, tension, and divide the entire country.” 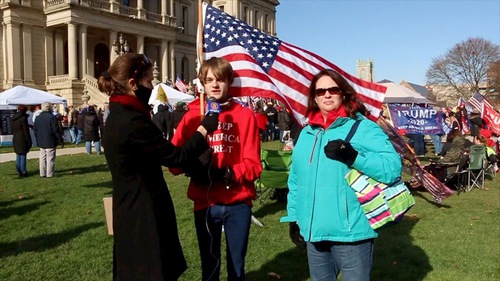 Time to End the AOC Blacklist

Congresswoman AOC (Alexandria Ocasio-Cortez) of the Queens District of New York is known as one of the Democratic Party's “gang of four.” Before the election concluded, she launched a “Trump Accountability” project. AOC is gathering information about those who support President Trump.

[Editor's note: The "Trump Accountability Project" (TAP) was canceled on November 12, two days before this rally.]

Several people condemned the AOC blacklist and said it's implementing the persecution methods communists use in the United States. This should be ended as soon as possible.

Eric Koernke said, “We are not afraid of this. Those Democratic leftists want to use this Trump Accountability project to persecute us. They are always accusing others. It's time to end this.”

Preston Runyon said, “The leftists advocate unity and then blacklist people to coerce them into keeping silent. It’s very chilling. We have the right to choose our president and express our feelings. This AOC project promotes communism.”

Jazmine Early said, “As a Hispanic, she (AOC) should be ashamed. This is a kind of brainwashing, indoctrination, and intimidation of people. It's a communist method.”

Chinese in Michigan: Choosing to Stand on the Side of Justice

Some Chinese from Michigan drove 12 hours to Washington D.C. on November 14 to participate in the large-scale rally in support of President Trump.

An increasing number of Chinese have been coming to Michigan's capital Lansing, to support President Trump. Ms. Xiaoling Shen, Qiuxiang Campbell, and Jing Zhao are from China. They drove about an hour and a half to Lansing to support the president and to “stand on the side of justice.” Xiaoling Shen believes that Trump is on God's side. She said, “The current situation makes us very sad. We want to express ourselves. We cannot stand on the side of evil.”

Ms. Jing Zhao appreciates President Trump's China policy. She believes that controlling and preventing the export of high-tech to the CCP will truly protect the United States.

One Chinese American said he received a text message from Biden’s team to solicit votes before the general election. He seriously replied: “I will not vote for Biden. I came to the United States to escape socialism.” Then he sent another message saying, “You may be young and idealistic. You don't know what disaster communism will bring to this country. Please don't contribute to Biden's campaign.”

*Editor's note: The "Trump Accountability Project" (TAP) was canceled on November 12, two days before this rally.

“Some Suggestions on How to Clarify the Facts about Falun Dafa”