A Day of Clarifying the Truth in the Western U.S. State of Oregon

(Minghui.org) In late October, the western part of the United States is far into autumn. The sun shines brightly and the cloudless skies stretch to the horizon. Many people visit the Beaverton Farmers Market in Oregon each Saturday, so local Falun Gong practitioners gather near the entrance to spread a message of hope. Two practitioners held a banner that said, “Reject Chinese Communist Party = Reject Virus” in both English and Chinese.

Due to the pandemic, the state of Oregon requires everyone to wear a mask in public places. While abiding by this requirement, one practitioner sought signatures for a “Reject the CCP, Disintegrate the CCP” petition and distributed truth-clarifying materials to passersby to garner support. 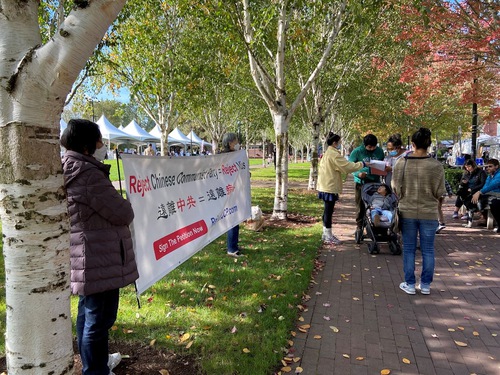 Some people asked for information and many signed the petition. A young couple took a brochure and said, “We need to take a look at this first.” As they left the market, they came back over and said, “We want to sign the petition.” They even asked for more brochures to give to their friends.

A lady who signed the petition, said, “The CCP is evil. It hid the truth about the epidemic and caused such a big disaster for the whole world.” She took a brochure with her and went into the farmers market. About half an hour later, the lady came back and asked, “Are you all Falun Gong practitioners?” When a practitioner said they were, the lady looked very excited and said, “Although I do not know much about Falun Gong, I totally know what you all are doing. For so many years in the U.S., you all have done a lot and suffered a lot of hardship. You all are really amazing! Including your standing here today. Really great!” She was noticeably touched and tears welled up in her eyes.

A man who signed the petition said, “Do you all support the democratic candidate?” The practitioner replied, “We are seeking signatures to reject the CCP. This has nothing to do with the presidential election.” The man replied, “Yes, the CCP is terrible!” When the practitioner said, “We hope that you can learn the truth today and let your friends know about it too,” the man agreed

An elderly Asian lady asked a practitioner in Mandarin, “Is this virus created by humans or did it occur naturally?” The practitioner replied, “I don’t know. The media says all kinds of things. But no matter what, when the epidemic first appeared, news of it should not have been hidden. The CCP withheld the news and caused such a big disaster worldwide. It caused the deaths of so many people. The CCP must be held responsible for its actions. It is really evil!” The lady agreed and went on to chat about the situation in Hong Kong and in Xinjiang. She said when she first moved to the U.S. from Hong Kong, she was very happy to see that Hong Kong had reunified with China. But now she is disappointed with the CCP. She signed the petition.

Another lady signed the petition and said, “After hearing that the Chinese people are suffering so much hardship under the rule of the CCP, I am really sad. I am thankful that all of you are here today to do this to help disintegrate the CCP and have a petition for people to sign and show their support. I wish all of you peace.”

Many people offered words of encouragement, saying things like, “Thank you all for doing such a wonderful thing.” Many people also gave a “thumbs up” to encourage the practitioners to continue their peaceful efforts to resist the persecution in China.