(Minghui.org) Today's news from China includes incidents of persecution that took place in 16 cities or counties in 11 provinces, where at least 21 practitioners were recently persecuted for their belief. 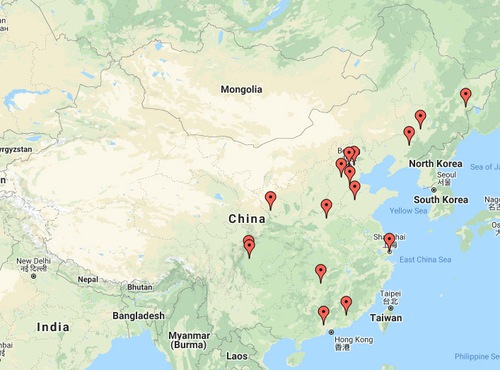 Mr. Wang Shuiyong was harassed and threatened on September 10, 2020, by deputy Party secretary Chen and deputy head Lu of Xixindian Township and Wu Jingmin, Party secretary of Lutun Village. After that Mr. Wang was frightened and had trouble sleeping and eating. He had a heart attack and died on the night of October 2, 2020.

Mr. Gu Zengmao was harassed at home by two Tongji Police Station officers in April 2020. They took pictures in his home.

He was harassed at home again on July 23, 2020, by Hu Bing, director of the Political and Legal Affairs Committee of Tongji Town, and two police officers from Tongji Town Police Station. They took pictures in his home.

He was harassed at home again on August 23, 2020, by Yin Xianzhi and Gu Jun from Tongji Town government. They also took pictures.

He was harassed at home yet again on August 24, 2020, by Lei Daokang, Party secretary of Qiaolou Village, and two people from the Tongji Town government. They took more pictures.

Ms. Ma Yanxiao, 52, was followed on February 27, 2020, because she was distributing truth-clarification materials. She was later arrested by four police officers and detained in Hanzhuang Police Station. She was interrogated and forced to sign and give her fingerprints on seven documents. After they took photos of her and extorted 6,000 yuan in cash from her, she was allowed to go home.

Mr. Zhu Bin is a teacher at the a No.1 Middle School of Zhuanglang County, Pingliang City. He was called to the political and education director's office at the school on July 28, 2020, and pressured to sign a so-called conversation record between him and the school official. He refused to sign, and the director threatened him.

Mr. Li Zongqian from Donguan Village, Zhuanlang County, was harassed at home in early August by four officials from the Shuiluo Town government, the local police station, and the village government. They ordered Mr. Zongqian to verify that he was not practicing Falun Gong and claimed that the order came from the provincial government.

Mr. Liu Yonghong is a teacher at Zhenghe Middle School. The principal of the school spoke to him in late September and said that he had to give up practicing Falun Gong and sign the record of their conversation, which Mr. Liu refused to do.

Ms. Jin Ximei is retired from the flour mill in Zhuanglang County. She was harassed in late August by three people from the Shuiluo Street Office and the Xiguan Residential Community.

Mr. Dong Weixing was arrested at work on October 10, 2020, by several plainclothes officers, including the head of the Domestic Security Division of Yitong County Police Department.

Ms. Wang Guohua was arrested on October 23, 2019, by officers from Chengxi Police Station in the Xindu District when she was teaching at the driving school. They ransacked her home and took a printer, computer, books, and other items. Ms. Wang has since been detained in Chengdu Detention Center. Her case was transferred from the Xindu District Procuratorate to the Xindu District Court on June 12, 2020, and her family was recently informed that she would soon be put on trial.

Ms. Zeng Haiping has been in Sihui Prison since June 21, 2018. At the start of 2020, a prison guard instigated inmate Li Zhicheng to beat Ms. Zeng several times.

Ms. Pan Yunmei of Nanzamu Town, Xinbin County, was arrested at the Shenyang Train Station when she was going to buy tickets to accompany her over-90-year-old mother to Changchun City for medical treatment. They were escorted back to Xinbin County by Xinbin police, and her mother was picked up by family members. The police confiscated the 5,000 yuan in cash that Ms. Pan had with her to pay for her mother’s treatment.

Ms. Rong Lanrong was harassed at home by staff from Yanjiao Residential Community on September 22, 2020. They videotaped her and later made a harassment call to her daughter.

Ms. Wang Yumei was arrested on August 21, 2020. The family barbershop and her home were ransacked. Her arrest was carried out by Sun Hongying, head of the Political and Legal Affairs Committee of Chengzihe District; Jin Xidong from the Domestic Security Division of Chengzihe District; and Donghai Mine Police Station officers.

Ms. Wang Yumei was taken to a detention center. She was placed in criminal custody on September 2 and then under official arrest on September 16.

Ms. Wang Yumei has been divorced for many years. After learning that she was arrested, her ex-husband tried to help her but was unable to. Worried about her, he suffered a brain hemorrhage and died in the hospital a day later. One of her younger brothers was in a daze at work when he learned of his sister’s arrest and broke two fingers. He had to stay home to recover. Ms. Wang Yumei's father is over 80 and he cries all the time, hoping his daughter will return home soon.

Ms. Liu Ying and another practitioner were arrested in mid-September 2020 by Chengdong Police Station officers for distributing truth-clarification materials. She was detained in the No.3 Detention Center. Now she is under official arrest, and her case was turned over to the Guancheng District Procuratorate. The other practitioner was released.

Ms. Li Huaiyuan was harassed at home on September 28, 2020, by Lu Fei from the Comprehensive Management Office on Jiangpu Street in the Yangpu District and Xu Yunfei, a full-time employee at the Shanghai Brainwashing Center. They intimidated her and suspended her pension.

More than 10 people went to Mr. Wang Haidong's home on October 11, 2020. They were Wang Jianjun, Party secretary of Tunken Town; Yu Zhigang from Tucheng Town; and officers from Tunken Town Police Station and Zhangbei Town Police Station of Zhangbei County. They intimidated Mr. Wang's wife and demanded that she sign a statement promising not to practice Falun Gong on behalf of her husband.

Ms. Liu Suqin was arrested at home on September 29, 2020, by officers Jia Lijie and Zhang Liangyuan from Shengli Police Station in the Shunyi District. Ms. Liu was taken to the police station and later to Shunyi Detention Center. Her family tried to bring her some clothes, but detention center officials would not accept them.

Ms. Hu Dongxia was in Changsha Women’s Prison for five years and released eight years ago. She received a notice on August 11, 2020, ordering her to the salary she received during the five years she was detained.

Ms. Li Linglian, 60, was scheduled to be tried in the Meixian District Court on October 10, 2020. The trial date was then rescheduled to October 29, after the attorney she hired requested a delay.

Ms. Peng Jie was arrested at home around 7 a.m. on August 18, 2020, and her home was ransacked. Her arrest was carried out by Tian Jiangtao, head of the Domestic Security Division in the Yuhu Police Department; Luo Kaiqiang; and seven Jianglu Police Station officers. Ms. Peng was detained in the Majiahe Detention Center for 38 days and released on September 26.