(Minghui.org) The Mid-Autumn Festival is one of China’s many traditional holidays and celebrates family reunions. Every year Falun Dafa (Falun Gong) practitioners worldwide send their greetings to the founder, Mr. Li Hongzhi. This year, Falun Dafa practitioners from Queensland gathered in Brisbane for a group picture and to express their gratitude. They recalled the many ways that Falun Dafa has helped them. 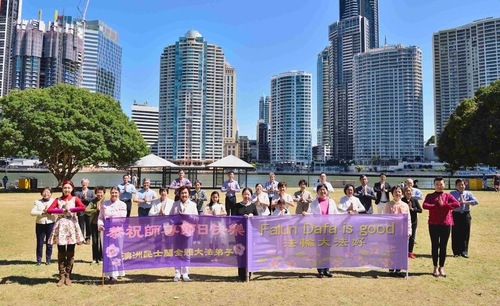 Practitioners in Australia gathered in Brisbane at Captain Burke Park on September 27, 2020, for a group photo to wish Master Li Hongzhi a Happy Mid-Autumn Festival. 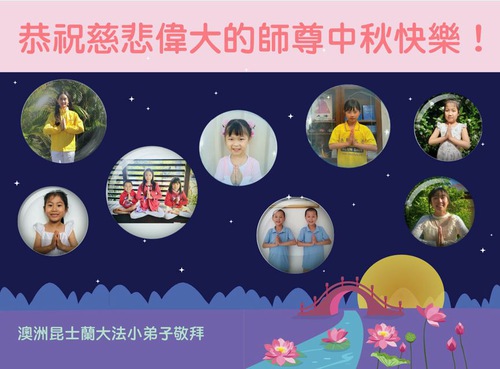 Cultivation Has Made My Life Beautiful 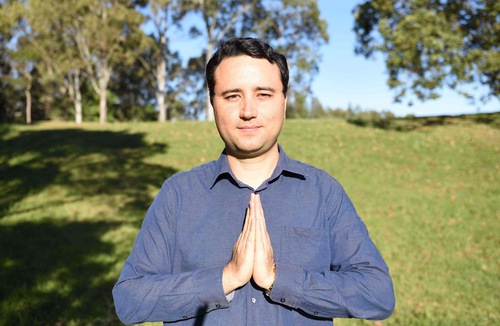 “When I first heard about Falun Dafa I was attending high school in Canberra. I came from a very broken family and neither of my parents had a job. We lived off government assistance and in public housing. I was very introverted. I distanced myself from others and seldom talked to anyone. I was even afraid to go into crowded places,” Richard said.

He started to practice Falun Dafa towards the end of 1999 and his life changed dramatically. “I realized that all my anxiety from people’s criticisms were actually an attachment. After enlightening to this, I stopped avoiding people. My friends and family noticed that I became more easy-going and friendlier.”

“I was an honor student. However, in order to get good grades, I spent several hours studying and doing homework. After I began practicing Falun Dafa, I gradually let go of my attachments of being anxious and the mentality of losing. When I let go of these attachments, I needed less time to study for tests or to do homework. It only took half the time to complete everything and my grades were still very good. I graduated from university and have a stable job.”

Richard is now a communication manager. He said Falun Dafa has helped him to achieve his full potential and avoid the big dye vat of ordinary society. Witnessing all his changes, Richard’s friends support him. Some of his friends also wish to become like him by following the principles of “Truthfulness-Compassion-Forbearance.”

Richard would like to express his gratitude to Master Li Hongzhi for helping him step onto the most righteous path. He wishes Master a Happy Mid-Autumn Festival!

Falun Dafa Has Made My Life More Meaningful 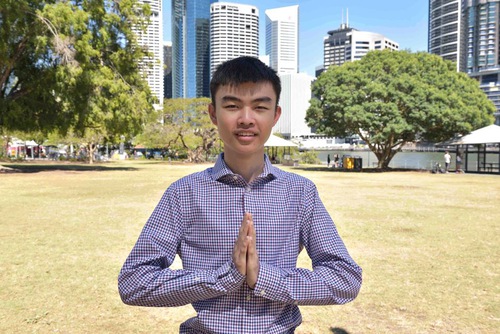 James is very grateful that Master introduced Falun Dafa to the world. He wishes Master a Happy Mid-Autumn Festival.

James, 18, attends one of the top 50 universities in the world—The University of Queensland. He majors in Computer Science and Engineering.

His mother started to practice Falun Dafa in 2012. In the beginning James followed his mother and only practiced the exercises. He said, “I thought Falun Dafa was just a qigong practice, but I felt very good after practicing and my body felt light.”

James attended a Catholic school and read some Catholic religious teachings. He realized reincarnation was never mentioned. He later started to read other religious books. He gradually realized that what Master said made a lot of sense.

“I noticed westerners or religious groups trying to help the poor. But they did not understand why people are poor; they do not know why some people are rich while others are poor. I also noticed that people with religious beliefs often trusted more in science and technology than God. Many of my friends are young Falun Dafa practitioners and they have higher morals and standards than others their age. Most young people nowadays are tempted very easily, however, these young practitioners are not. They know about modern trends, but don't follow them.”

All of what James encountered made him feel that practitioners have a lot of wisdom. In 2016 he started to truly practice Falun Dafa. He began reading Master’s lectures and felt that what Master taught is correct. James said, “After I began cultivating, I became self-disciplined. I decided to abide by the principles of Truthfulness-Compassion-Forbearance.”

“I was very defiant in the past. I always wanted to keep up with the trends like drinking alcohol and having a girlfriend. After I began cultivating myself, I realized none of these are important. Before I applied to universities, I decided to abide by what Master says: 'When it’s impossible to do, you can do it.' (Zhaun Falun). This has made me what I am today and I was admitted to a good university.

James said, “Practicing Falun Dafa has made my life meaningful and I am especially grateful to Master Li Hongzhi for teaching this Fa. I sincerely thank Master for showing me the true meaning of life. I wish Master a Happy Mid-Autumn Festival.”

Australian-Asian Entrepreneur: Dafa Has Made Me More Forbearing 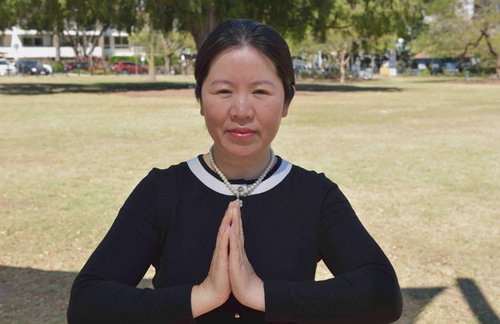 Anna, an Australia-Asian entrepreneur, is grateful to Falun Dafa for helping her become more forbearing. She would like to thank Master and wishes Master a Happy Mid-Autumn Festival.

Anna lives in Queensland, Australia, and runs her own business. Anna was introduced to Falun Dafa in China by her sister in 1996. Unfortunately at that time she did not think much of it. It wasn't until 1998 when Anna had a dangerous pregnancy that, advised by her sister, she decided to try Falun Dafa.

“The doctor prescribed a lot of different medications. They were mostly to prevent me from bleeding too much. When my sister asked if I wanted to go to the hospital, I refused and said I’d rather practice Falun Dafa.”

“I would read one lecture in Zhuan Falun every day. My legs were very stiff and although I could meditate I would only do the first four exercises. I only had four Dafa books and after reading all of them I realized how wonderful Falun Dafa is! I repeatedly asked my sister, “Why didn’t you tell me how amazing Falun Dafa is?” I regretted not reading Zhuan Falun when my sister first suggested it.”

After Anna started cultivating she persevered. The dangerous medical condition was resolved without her going to the hospital. After two months she recovered and had a healthy baby boy.

Anna said, “Cultivating Falun Dafa has helped me improve my moral standards, especially with my ex-husband. He used to think about other women and did not care about our son. I was the only one raising my son. On top of that, he did not want a divorce. As time passed by, I started to have hatred and resentment towards him.”

“During the process of cultivation, I’ve slowly let go of my hatred and resentment. After we divorced, I treated him as a friend and sent him packages from Australia. I would also send my ex-mother-in-law gifts.”

“Cultivating Falun Dafa has truly made me more forbearing. I’ve reminded my son not to hold any grudges or resentment for his father or his father’s new family. Everything is predestined. My ex-husband often says that he truly appreciates what we do for him and is happy that we do not hold any grudges against him.”

Anna said, “Establishing my business has been tough. If I didn’t practice Falun Dafa, I wouldn’t be as forbearing. I might have gone crazy after encountering betrayal in my marriage and having to raise my son by myself. I am grateful to Dafa for helping me be more forbearing. Although I’ve never met Master, I am truly grateful to him from the bottom of my heart. No matter how busy I get, I would always take time to clarify the truth to Chinese tourists. I hope that all the Falun Dafa practitioners who are illegally detained in China can be set free one day.

Anna added, “I can never repay Master. What he has given me is not something I can repay with words or material objects. If it wasn’t for Master’s compassionate salvation, I would not have made it until today. I would like to sincerely wish Master a Happy Mid-Autumn Festival.”