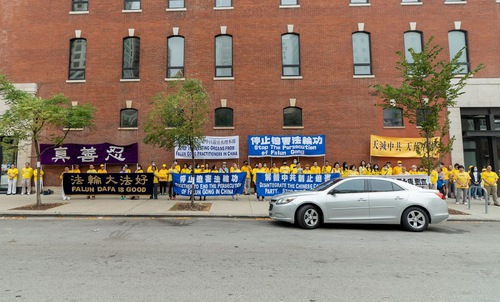 Falun Dafa practitioners gather outside the Chinese Consulate in Chicago to protest the ongoing persecution in China.

The CCP's Central Political and Legal Affairs Committee launched a new "Zero-Out" campaign across China in recent months to attempt to force practitioners to sign statements defaming Falun Dafa and renouncing their belief.

Illinois Falun Dafa Association Coordinator Ms. Liu Yi said the CCP and Jiang Zemin’s (former CCP leader) faction have been persecuting Falun Dafa for 21 years, since July 1999. “Countless kind, innocent practitioners have been kidnapped, arrested, imprisoned, sentenced and cruelly tortured, and have even been persecuted to death by having their organs removed,” she said. 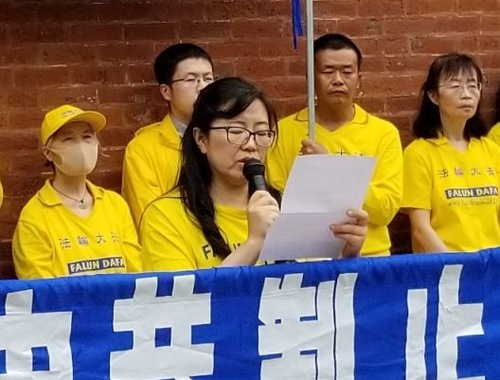 Numerous Unjust Cases for Over 21 Years 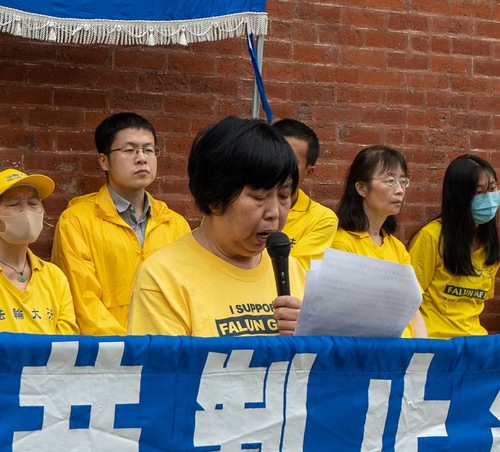 Ms. Li recalls the persecution she experienced in China

Ms. Li started to practice Falun Dafa more than two decades ago in 1995. She recalled when the persecution was launched in 1999, and her life was turned upside down.

“We thought there must be some misunderstanding when the CCP began to crack down on Falun Dafa on July 20, 1999,” she said. “We planned to go to Beijing to clarify the truth. I arrived at the train station on July 22, where police intercepted me and took me to a police station. Officers took turns to interrogate me then made us watch TV programs defaming Falun Dafa. They asked me to write a statement promising not to practice it anymore. I refused. They then took turns watching me around the clock. On July 24, I heard that the head of our Assistant Center was persecuted to death. That was the first time we heard that a Falun Dafa practitioner had been persecuted to death. I didn’t expect that it was just the beginning of this 21-year-persecution.”

Ms. Li said that many practitioners in China who persevere in practicing Falun Dafa are still living under the high-pressure terror. The CCP can arrest them at any time.

“Since 2017, practitioners in China are immediately body searched as soon as they present their IDs at train or bus stations,” she said. “Their home keys can be taken and used to open their homes and confiscate their property, and they can be thrown into prison as well. When you stay at home, officers often come to harass and monitor you. Every practitioner’s home is surrounded by HD cameras.”

She said many practitioners had been killed in the persecution over the past 21 years. Her friend, who was in her 30s, was tortured to death 50 days after being arrested. Nothing is known of what she went through before her death. A young practitioner was thrown into prison and died within a few days. A practitioner who was in her 20s has been missing since she went to Beijing to appeal at the end of 2001. The effort to search for her has turned up no clues. Such unjust cases can be found all over China.

Practitioner Ellian said the CCP's latest Zero-Out Campaign is meant to force every single practitioner on the government's blacklists to renounce Falun Gong and the principals of Truthfulness-Compassion-Forbearance.

“Nobody is allowed to believe in these universal principals. This is to eliminate people’s kind nature. How evil that is,” she said.

Ellian said that one of her family members in China had been subjected to two brainwashing sessions during the CCP's Zero-Out Campaign. Her family member said that the CCP arrested her and other local practitioners who were on a blacklist. Two of them were taken to a detention center and were told they would be sentenced. Other practitioners were taken to brainwashing classes where they were deprived of sleep and forced to listen and watch programs that defame Falun Dafa and its founder. Practitioners were then forced to transcribe statements renouncing Falun Dafa. Session staff threatened to stop practitioners’ family members from working if they refused to transcribe those statements.

The World Is Awakening 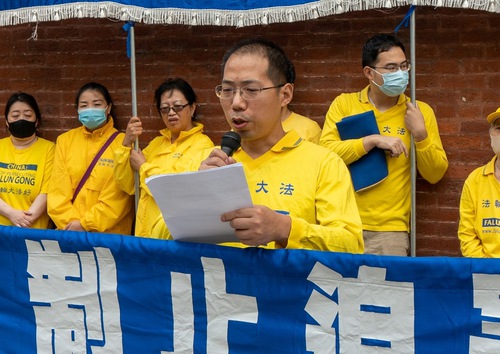 Practitioner Mr. Liu Qishun said that this has been a year of disaster and the whole world is experiencing unprecedented difficulties and challenges.

“But this year is also the year the entire world is awakening. People are seeing clearly the CCP’s evil nature and the disasters it brings to the world. People are joining forces against the CCP.”

Mr. Liu talked about the persecution he suffered in China.

“What I suffered let me see the CCP’s evilness. However, what I suffered is even less than the tip of the iceberg of the CCP’s crimes. The CCP has not avoided any crime in its 21-year-long persecution of Falun Dafa. The Minghui website publishes a lot of cases every day about practitioners in China being persecuted. Killing practitioners for their organs is still happening on a large scale.”

Mr. Liu said that when the CCP takes all those means it has used to persecute Falun Dafa on the world stage, that is the time when the evil will show itself to the whole world.

“One example is what the CCP did recently in Hong Kong. Although what it did was so evil and was scorned by the entire world, the CCP itself thinks it did the right thing. This greatly exposes its evil nature. So many of the average Hong Kong people went to the streets to protest the CCP and they have totally awakened to the CCP’s nature.”

Supporting Efforts Against the Persecution 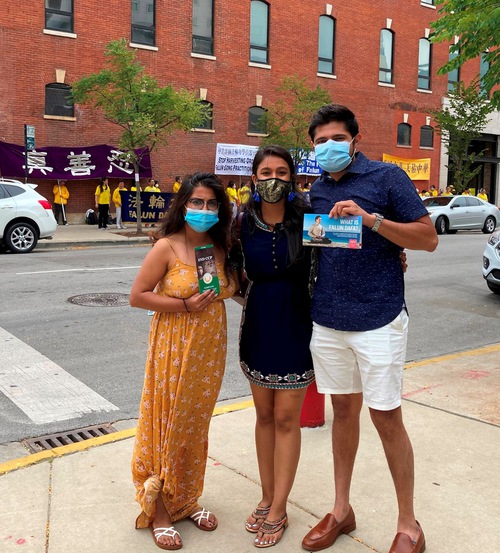 Birju, Chandani, and Sarah from Chicago support practitioners’ efforts to stop the persecution.

Birju, Chandani, and Sarah are from Chicago. They were interested to hear that Falun Dafa is a great cultivation way of the Buddha school. Cultivation in the Buddha school is not a foreign concept to them given their Indian heritage. They took a picture at the scene and said they supported practitioners’ efforts to stop the persecution. 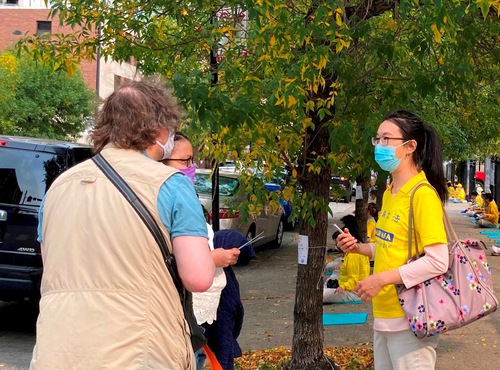 Peter and Carolina from Chicago wanted to learn more about Falun Dafa.

Peter and Carolina from Chicago heard about Falun Dafa when they watched Shen Yun Performing Arts. Seeing the peaceful and benevolent scene of practitioners doing exercises, they couldn’t understand why the CCP persecuted such a great practice. They expressed great sympathy toward practitioners in China. They took some information from practitioners and said they wanted to learn more about the practice.