(Minghui.org) Ryan Winkler, majority leader of the Minnesota House of Representatives, recently wrote to the Handan City officials in Hebei Province, China, expressing his concern for safety of Ms. Sun Lanying as well as other Falun Gong practitioners detained in China.

Falun Gong, also known as Falun Dafa, is meditation system that consists of gentle exercises and living by the principles of Truthfulness, Compassion, and Forbearance. The Chinese Communist Party (CCP) began to suppress the group in July 1999.

Ms. Sun, 60, lives in Guantao County, Hebei Province. On the evening of June 3, 2019, Li Junshan from the Guantao Domestic Security Bureau and 14 other officers broke into her residence and confiscated personal belongings. Li and other officers then showed up the next day to arrest Ms. Sun, forcing her to stay away from home. 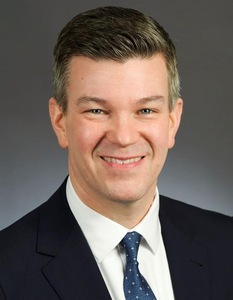 Ryan Winkler, majority leader of the Minnesota House of Representatives 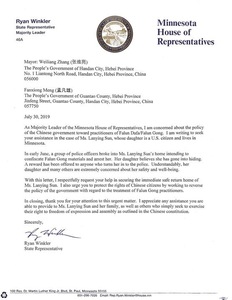 Mr. Winkler’s letter was addressed to Zhang Weiliang, mayor of Handan City, and Meng Fanxiong, head of Guantao County (Guantao is a county within Handan City).

“As Majority Leader of the Minnesota House of Representatives, I am concerned about the policy of the Chinese government toward practitioners of Falun Dafa/Falun Gong. I am writing to seek your assistance in the case of Ms. Lanying Sun, whose daughter is a U.S. citizen and lives in Minnesota,” he wrote.

While Ms. Sun’s family was worried about her whereabouts and safety, Li included Ms. Sun on the police system’s “wanted” list to pursue her. Winkler wrote, “Understandably, her daughter and many others are extremely concerned about her safety and well-being. With this letter, I respectfully request your help in securing the immediate safe return home of Ms. Lanying Sun.”

As director of Guantao Domestic Security Bureau, Li is responsible for the mistreatment of many practitioners in the county. After Ms. Shi Hongwen was arrested on January 20, 2017, Li not only extorted 30,000 yuan from her but also required her to report to the police daily, even after her release on February 2, 2017.

Two other practitioners, Ms. Guo Yuying and Ms. Luo Shuxia, were arrested on January 12, 2017, for distributing Falun Gong materials. Both of them were detained for eight days and fined, 10,000 yuan in Ms. Guo’s case and over 20,000 yuan in Ms. Luo’s.

Some practitioners have lost their lives due to the persecution. After Li and other officers arrested Ms. Hao Yuzhi on July 16, 2011, they ransacked her place and took her to the Shijiazhuang Women’s Forced Labor Camp. The guards there put her in solitary confinement and beat her. As her health deteriorated, they continued to make her work and instigated inmates to abuse her. Ms. Hao died in the labor camp on September 6, 2012, at the age of 58.

In his letter to government officials, Winkler sought respect for the basic human rights of other Falun Gong practitioners: “I appreciate any assistance you are able to provide to Ms. Lanying Sun and her family, as well as others who simply seek to exercise their right to freedom of expression and assembly as outlined in the Chinese constitution.”