Thousands of practitioners have been tortured and killed over the past 20 years simply because they refused to give up their spiritual practice. The practitioners who gathered in front of the Chinese Consulate demanded that Beijing immediately end the persecution and asked that the international community lend a hand in ending the persecution. 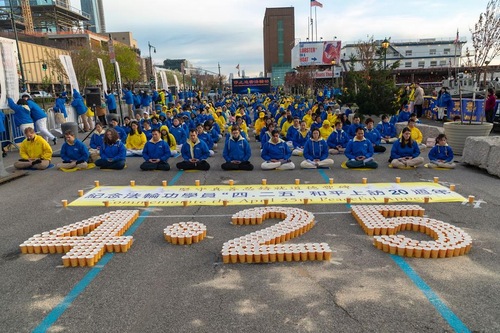 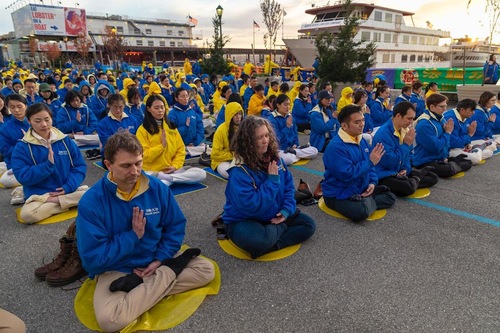 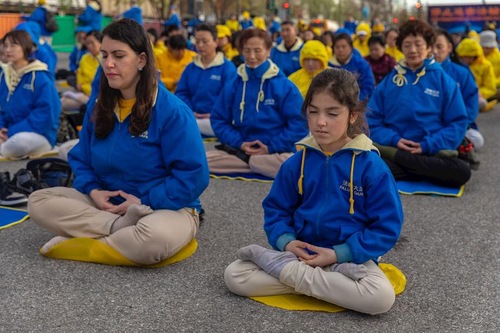 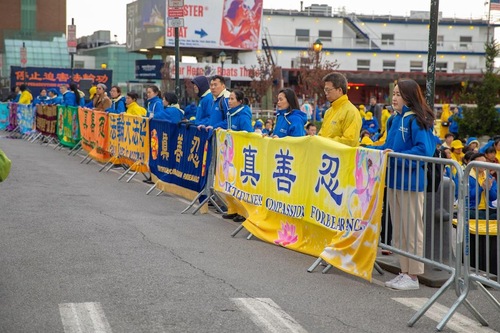 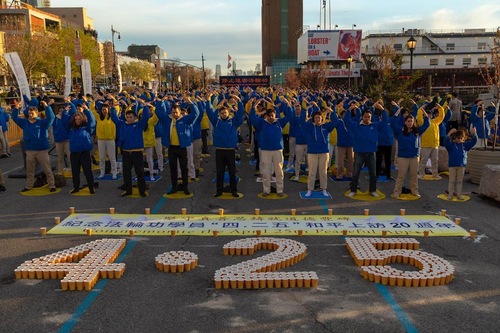 On the evening of April 20, 2019 practitioners in New York City held a candlelight vigil in front of the Chinese Consulate to commemorate the practitioners who died during the persecution in China. They demonstrated the exercises during their solemn event. 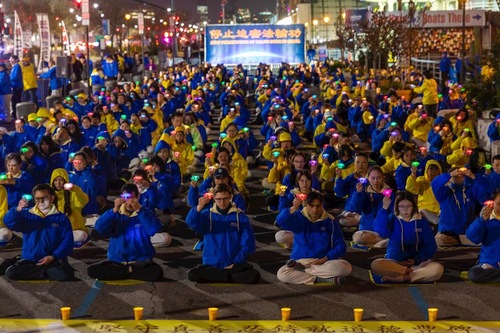 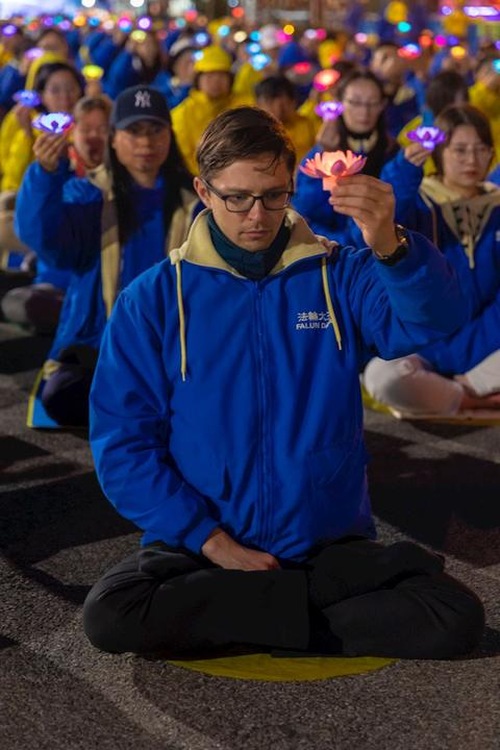 According to incomplete statistics on Minghui.org, 4,296 practitioners have died as a direct result of the persecution.

Practitioner Ms. Han Yu said that she misses her father, Mr. Han Junqing, who was also a practitioner. He died three months after being illegally arrested on May 4, 2004. Ms. Han saw her father’s body just before he was cremated and under tight police security. There were injuries on his face and a piece of flesh below his left eye was missing. Her aunt and uncle managed to open her father’s shirt and saw an incision the entire length of his abdomen. When they pushed on his abdomen they noticed that it was filled with ice cubes and his organs were missing. She said that over 100 officers surrounded them and no cameras were allowed. Her father’s body was cremated shortly afterward. 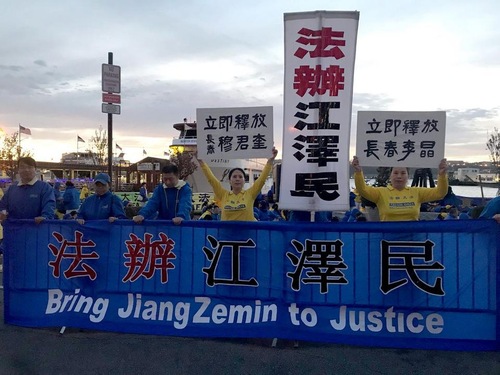 Practitioners displayed banners that read, “Bring Jiang Zemin to Justice” and “Stop the Persecution of Falun Gong.” Other messages asked Beijing to release practitioners who are currently incarcerated for their faith. 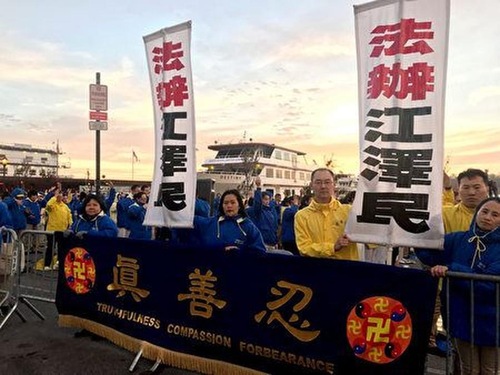 Mr. Zhang Wei (middle in yellow) from Shandong asked Beijing to immediately release his mother, Ms. Zhang Aili. She has been illegally incarcerated since November 2018.

Ms. Li Dianqin talked about what she saw 20 years ago. Ten thousand practitioners quietly lined the sidewalk across from the Appeals Office, believing that their government would listen to them. Everyone was quiet and orderly. No one shouted slogans or blocked the flow of traffic, either on the sidewalk or on the street. When they left, the streets were cleaner than when they arrived. Ms. Li said that one police officer told her subordinates, “Look at how clean the ground is! That is true virtue!” 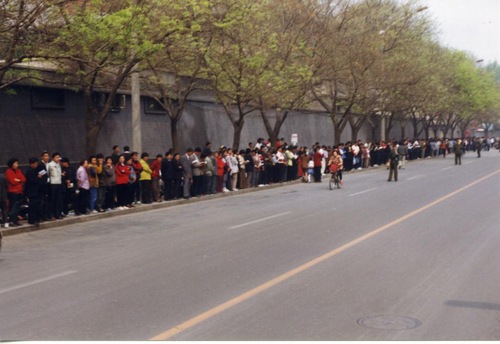 Falun Gong practitioners stood in orderly rows on the sidewalk across from the Appeals Office in Beijing on April 25, 1999.

Another practitioner, Tian Tian, said that the practitioners who went to Beijing to appeal were quiet and dignified. Some volunteered to help keep everyone in order, even at the public restrooms. Others cleaned the restrooms afterward. They sincerely wished to protect and uphold their belief.

Kong Weijing remembered that he was at the appeal for more than 12 hours. He said that even though 10,000 practitioners had been there, when they left, there wasn't a single piece of paper on the ground. They even picked up the cigarette butts left by the police officers on duty.

Passersby Impressed by the Peaceful Event

Many passersby said they were impressed by the practitioners’ kindness and the peaceful atmosphere during the event in New York. One MTA staff member commented about how quiet and peaceful it was as he took some information about the event. 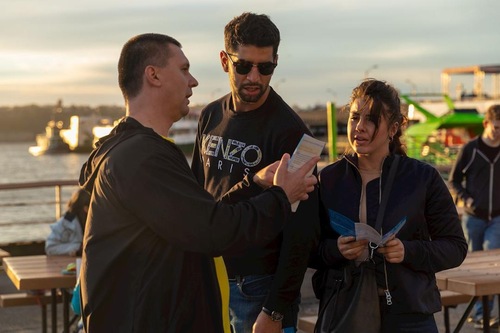 A practitioner explains why the persecution is wrong. 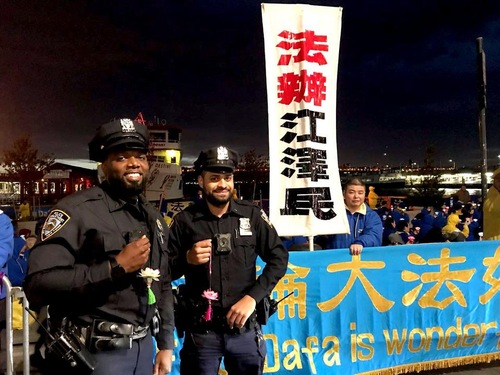 Practitioners gave NYC police officers paper lotus flowers with “Falun Dafa is Good” written on them. The officers said that they know that Falun Dafa is good and that it is being persecuted by the Chinese communist regime.

One Chinese student who attends Yale University stopped to talk with practitioners during the vigil. After he learned about the persecution, he agreed to withdraw from the China Youth Corps he'd joined. He said he wished to side with good and upright people.