Witnessing the Miracle of Life and Blessings from Practicing Falun Dafa

(Minghui.org) Sixty-six-year-old Zhang Ruilan has been practicing Falun Dafa for more than two decades. She is zestful and energetic every day, which is a stark contrast to her previous fragile state.

From a young age, she was the weakest child in her family and was prone to illnesses. “One time, my grandmother saw my thin, frail body and gave me a bowl of meat broth to drink. It unexpectedly caused me to have severe diarrhea, and my family had to take me to the hospital for emergency treatment,” she recalled.

Ruilan's health did not improve as she got older. She joked that she would even faint during the school's flag-raising ceremony. When she was in middle and high school, everyone at school knew her as an “important student” who needed someone to call an ambulance whenever she became ill. She was admitted to a hospital just before her university entrance exams. Unlike her classmates, she had to lie in bed for a long time and could not study for her exams.

To make things worse, Ruilan fell down some stairs just before her marriage and injured her spine. She had also suffered from a range of other health issues, such as stomach and liver problems, bronchitis and hand eczema for many years. Her physical condition at the age of 30 was worse than that of a 60-year-old person. There was no happiness in her life.

“It took me a long time to do anything. While others could wash the dishes quickly, I had to do a few and then rest for a while. I could not make it across the road during the 30-second-long traffic light. Sometimes when I was out buying food, I would suddenly be unable to move. I had to stand there until my husband came looking for me and took me home. In the morning, my three children had to take turns massaging my back for at least half an hour, before I could slowly climb out of bed with their help.”

She tried all kinds of treatments to change her situation, including acupuncture, massage, herbal medicines, alternative treatments, and various schools of qigong. She also consumed a lot of health products. She found that no matter what she did, things would seem to improve a little in the beginning, but after some time her health problems always returned.

A friend sent Ruilan a copy of Zhuan Falun, the main book of Falun Dafa, in 1997 and told her the founder Mr. Li Hongzhi would be holding a class in Taipei on November 17. Ruilan took her mother to the class and on the way happened to see Master Li in a car that was driving past. In that instant, she felt a strong energy current flow through her body. After the class, Ruilan had diarrhea for several days. “Usually my whole body would feel drained, but on this occasion I felt light and relaxed and in good spirits. I realized that this was a wonderful practice, and I must treasure it,” she recalled.

After Ruilan made up her mind to practice Falun Dafa, over the next few days, she had cramps in her legs at exactly 5:00 a.m. She knew it was time for her to overcome her laziness and get out of bed to do the exercises in the park. “Not long after I took up the practice, my children asked me: 'How come you don't need us to massage your back every morning?' I realized that I had been getting out of bed once the alarm went off and then would quickly leave home to do the exercises. I was astonished to realize that the spinal pain that had plagued me for many years was gone.”

Ruilan became a different person over the next several months. She used to complain that her body was getting older by the day, but now she was starting to feel younger each day. “In the past, I walked like an elderly woman. Nowadays, I run across the road. My family used to hear me groan in pain, but these days I'm always happy and smiling. I finally know how wonderful it is to be healthy and pain-free.” 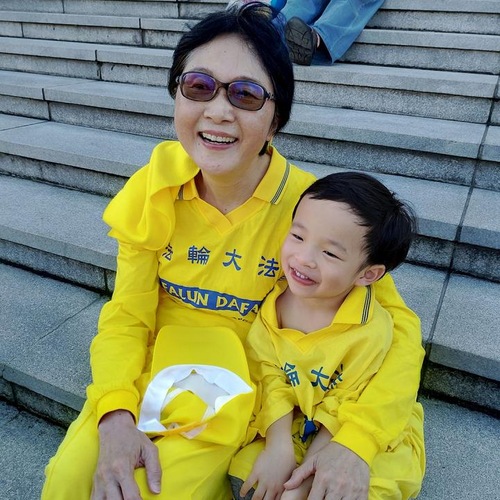 Grateful to Falun Dafa for changing her life, Ruilan wondered how she could spread the word and help more people benefit from practicing Dafa. She got a dozen people, her sisters, friends and relatives, to attend a session of nine-day introductory classes. She later thought that she should hold the classes in her house, since she has a spacious living room.

Ruilan has been holding nine-day Falun Dafa seminars at her home from the first to the ninth day of every month since October 1998. She plays the video recordings of Master Li's lectures and teaches people the exercises. For more than 20 years, the sessions have been held every month, except during the Lunar New Year. An estimated 1600 people have attended these classes.

“I've met many people who experienced how amazing Falun Dafa is in the years I've been holding the classes. There are some who suffered from insomnia for many years and were able to sleep throughout the night after attending the class on the first day. There were people who had tried many ways and means to quit smoking and then miraculously stopped through taking up the practice. Many more have shared the health improvements they experienced after attending the classes.”

Miraculous Recovery from a Tumor

A rather big tumor suddenly appeared in Ruilan's lower body in the summer of 2008.

“Within a few days, my condition changed from having difficulty walking to hardly being able to stand straight. My whole body would shake in great pain every time I tried to walk. I could not go outside to do the exercises,” she recalled.

She thought of Master's words:

“In genuine cultivation practice one must cultivate one’s own heart and inner self. One should search inside oneself rather than outside.” (Lecture 9, Zhuan Falun)

She reflected on her shortcomings and discovered that she often corrected other people's actions unkindly. Yet the faults she saw in others were precisely her attachments. As she kept looking inside, she found many areas in her life where she needed to improve. One day, nearly two weeks later, something happened unexpectedly while she was sending righteous thoughts.

“I felt tall and mighty, as if I was standing in a very vast dimension. Words cannot describe how amazing and wonderful it felt. I went to the bathroom after righteous thoughts and discovered the tumor, which was covered in pus and blood, had passed out of my body. I felt normal, as if I had never been ill. What a miracle! It was inconceivable,” she recalled.

Even doctors have been unable to explain her recovery. They said it was a miracle.

Ruilan's family has also benefited from practicing Falun Dafa. Her bad-tempered husband became a new person after he became a practitioner and now cooks for their family every day. Her anemic daughter often used to faint. After practicing Dafa, her health improved. Her twin sons, who were average students, surprisingly got into the national university and now have successful careers.

Looking back, Ruilan feels very fortunate to be a Falun Dafa practitioner. She sincerely hopes more people can experience the benefits of practicing Dafa.