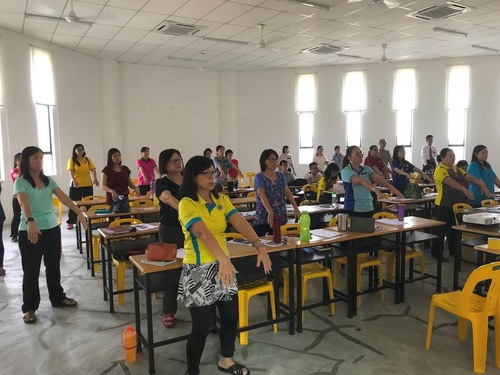 Teachers and administrators from three schools learning the Falun Dafa exercises on July 17, 2018. 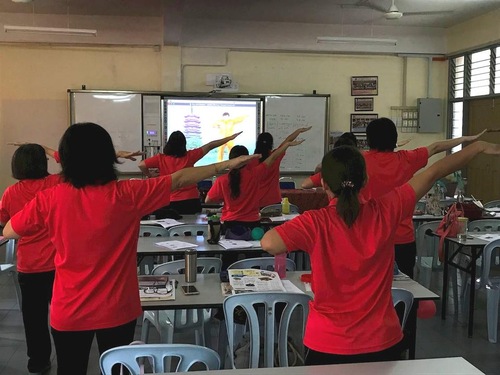 The two educators talked to their Malaysian counterparts about how Falun Dafa has benefited the students and teachers in their schools in the United States, and their visit was warmly received.

The principal at the first elementary school invited principals and teachers from two other schools to attend the seminar and the exercise instruction session.

A few teachers who had previously heard the Chinese regime's propaganda defaming Falun Dafa raised questions. The practitioners took the opportunity to clarify the facts about the persecution and about Falun Dafa.

One middle school's headmaster expanded the seminar, which was originally planned for two departments, to the whole school, when he heard that it was about Falun Dafa.

The practitioners gave a well-received seminar to the whole staff at another middle school, and were invited back for another session afterwards. 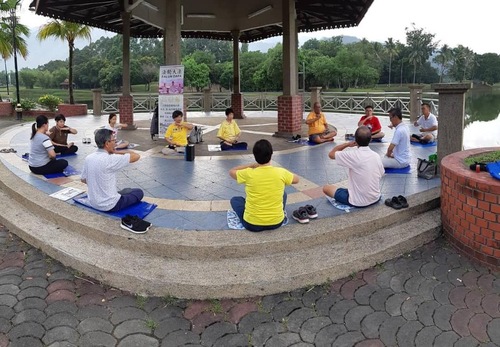 Taiping is a tourist town in northwest Malaysia that is known for its well-preserved colonial architecture. Practitioners felt that establishing a practice site there could help coordinate group practice, Fa-study and other activities.

At the first meeting, the practitioners enthusiastically shared their experiences of when they first started practicing Falun Dafa.

Mr. Li shared that eight years ago, a friend had seen how unhealthy he looked and given him a CD-ROM of the Falun Dafa exercises. He took up the practice enthusiastically and soon saw marked improvements in his health.

Mr. Li had suffered from high blood pressure, and an issue with his intervertebral disk meant that moving about had been painful and difficult. “I could not even lift a roasted duck before. Now, I can carry two buckets of water and can squat down freely. Even my high blood pressure has disappeared.”

At the first meeting, practitioners decided to follow the guidance of Master Li Hongzhi by having weekly group Fa-study on Wednesdays and group exercise practice on Sundays in Taiping Lake Gardens Park.

During a party with friends, a practitioner shared the merits of Falun Dafa and how it can benefit people who have busy schedules. One of the friends, Mrs. Luo, said that she and her husband always get up at 6 a.m. to exercise.

Following this suggestion, Mrs. Luo decided to learn the Falun Dafa exercises in the parking area of the railway station the next morning.

While practitioners were teaching her the exercises, seven villagers who had been exercising in the parking area wanted to join. After learning the exercises, all of them decided to meet every morning at 6 a.m. from Monday through Saturday.

After learning the exercises, Mrs. Luo shared her surprise, “My whole body is comfortable. And my knees no longer hurt.” She volunteered to help a local practitioner coordinate the daily practice.

Practitioner Mrs. Liu told the others that after she had practiced for a month, her feet and knees no longer hurt while walking up and down the stairs.

The older sister of two new practitioners said that her knees used to be very stiff, but she could sit with both legs crossed after a few weeks of practicing Falun Dafa.

The younger sister said that after practicing the fourth exercise, her fingers no longer felt numb and painful.