The scenic and ancient city of Ostersund in Jämtland was the first stop on this mini- tour. Ostersund's history dates almost 2,000 years, to the times of the immensely popular mythological Swedish King of Freyr.

The response from the local people in Ostersund was warm, and many visitors came to see the exhibition, which was held in the hotel Gamla Teatern, constructed in 1884.

One older couple was very disturbed by the persecution in China and asked what the future would hold. They were happy and much relieved when practitioners told them that traditional culture may well return and that evil will gradually diminish. 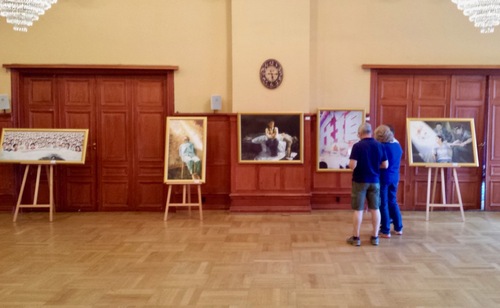 The exhibition opened in the legendary Hotel Knaust in Sundsvall, the capital of the province of Medelpad, on July 16. Hotel Knaust was rebuilt by Mr. Adolf Knaust, a man from a famous family with a great interest in culture and classical music after it was destroyed by fire in 1888. It subsequently quickly became an international attraction. 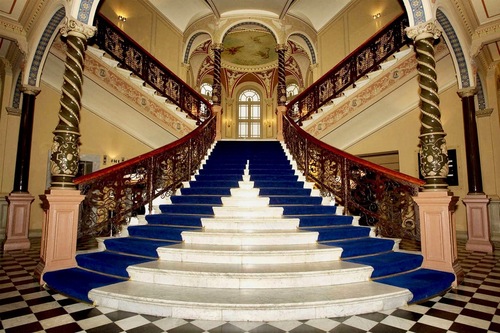 The marble staircase in the Hotel Knaust is one of only two staircase “masterpieces” in the Western world. It is a major tourist attraction, and many people visit the hotel daily just to see the staircase. 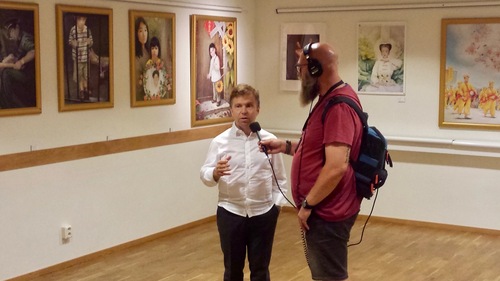 On the third day of the exhibition, the national radio station, SR P4 Northwest, came to interview the practitioners responsible for the exhibition. After a practitioner told the reporter about the crimes of the Chinese Communist Party (CCP), he wanted to hear the details of how the CCP infiltrates and controls many countries. The entire interview was broadcast live to the public.

Many locals and hotel guests came to see the exhibition, and many of them expressed dismay at the inhuman treatment of Falun Dafa practitioners in China.

Top staff members from the Royal Thai Embassy in Sweden were staying at the hotel, and the Thai Ambassador to Sweden became interested and entered the exhibition for a guided tour. Several other embassy staff members also viewed the paintings with great interest and had many questions. 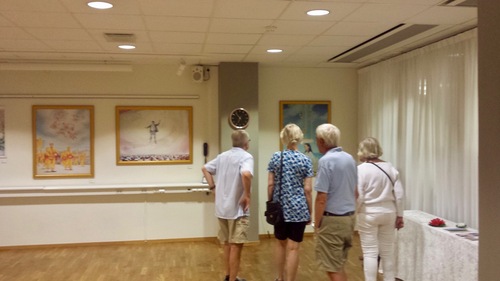 Two gentlemen at the exhibition engaged in a detailed discussion with a practitioner about the moral degradation of Chinese society and how it affects the world today. One of the gentlemen urged other guests in his travel group to see the exhibition. He emphasized, “You should go and look at it – this is serious!”

On the final day of the exhibition, two prominent couples came to see the artworks after hearing about it on the radio. One of the couples had lived in China for many years, and the husband had run a large factory there. They were very clear idea about just how evil the CCP is and had a great interest in all the paintings. After seeing the last painting, one of the men exclaimed, “You are giving us hope! This is the best art exhibition I have ever seen, and I have learned many things today.”

They sincerely thanked the practitioner for giving them a tour.