(Minghui.org) “The birds were singing, and the sun was shining. The air was very fresh at Lippepark last Sunday,” described the Germany newspaper Sunday Courier (Sonntagskurier) on March 31. The article was about the gentle meditation of Falun Gong practitioners in Luenen, Germany.

With a circulation of over 90,000 copies, this newspaper covers the communities of Luenen, Werne, Selm, Bork, Nordkirchen, Bergkamen-Nord and Dortmund-Nord. The article, titled “The mind at rest—Falun Gong group meets regularly at Lippepark,” described 14 practitioners who practice exercises along with music, eyes closed. The exercises included both a standing and sitting meditation. 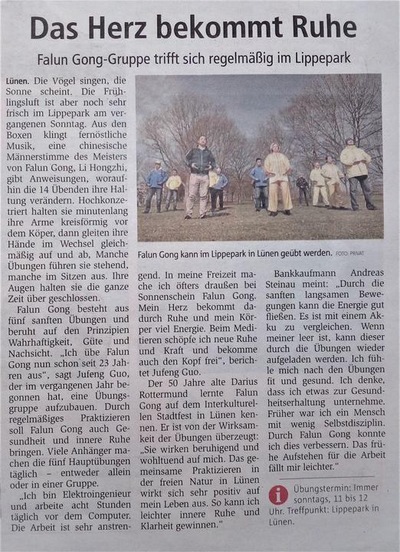 Germany newspaper Sunday Courier (Sonntagskurier) reported on March 31 about the meditation by Falun Gong practitioners at Lippepark in Luenen.

Falun Gong consists of five gentle exercises based on the principles of Truthfulness-Compassion-Forbearance, noted the article. “I've been practicing Falun Gong for 23 years,” remarked Jufeng Guo, who started the exercise group last year. By practicing regularly, practitioners gain improved health and peace of mind. This is why practitioners do these five exercises on a daily basis, either individually or in groups.

Guo said that he is an electrical engineer and works in front of a computer eight hours a day. “In my free time, I often practice Falun Gong outside in the sunshine. My mind becomes calmer and my body gets more energetic,” he said. “When meditating, I regain my calm and strength as well as clear my mind.”

Another practitioner, 50-year-old Darius Rottermund, learned Falun Gong at the intercultural city festival in Luenen. “Doing the exercises outdoors in Luenen is relaxing, and the exercises are convincing and soothing. They have had a very positive effect on my life. That is, they help me to gain inner peace and clarity,” he explained.

Banker Andreas Steinau said the gentle movements help with energy flow. “It is like recharging a battery. When my energy level is low, I can recharge by doing the exercises. After that, I feel fit and healthy.”

He said he had benefited a lot from Falun Gong. “I used to have little self-discipline. I have now improved through Falun Gong. Getting up early for work has also become easier.”