(Minghui.org) More and more Chinese people are now seeing the nature of the Chinese Communist Party (CCP), 19 years into the persecution of Falun Gong in China. Inside China, more than 300 million have quit the CCP organizations as of March 2018. Outside China, practitioners volunteer to greet Chinese tourists and tell them the facts about Falun Gong and the persecution.

Below are some recent stories at the Eiffel Tower in Paris, France.

Renouncing Communist Membership as a Group

A group of tourists in their 20s and 30s arrived one Saturday after lunch. Ms. Sun, a practitioner at the site, answered many of their questions. Two college students asked about the Nine Commentaries on Communist Party, saying that they would bring the information back to China. “Thank you for telling us, otherwise we would not have known anything about it,” one of them commented, “I now know how vicious the Party is and I don't want to die with it.”

As these two students agreed to quit the CCP organizations, which also includes the Youth League and Young Pioneers, other visitors in the group did the same. One of them suggested a group photo and as the tourists said, “cheese” for a big smile, Ms. Sun proposed to say together “Falun Dafa is good” and “Truthfulness-Compassion-Forbearance is good.” Everyone agreed and some who did not withdraw from the communist party also changed their minds. 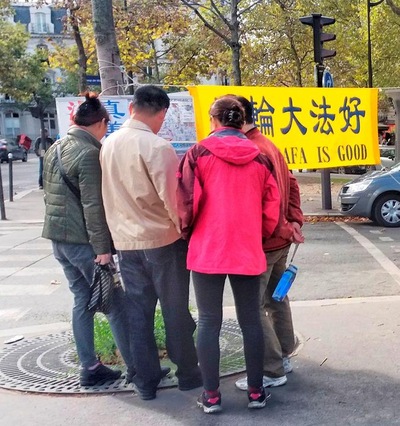 Chinese tourists read a poster by Falun Gong practitioners near the Eiffel Tower.

“We Will Be Back”

Ms. Xing, around 80 years old, often goes to the Eiffel Tower tourist site to distribute Falun Gong materials to Chinese tourists. One man took a copy and returned after lunch. “I have read this pamphlet and it makes lots of sense,” he said.

“Have you thought about quitting the CCP?” asked Ms. Xing.

“Sure,” replied the man. He later brought several other friends and all of them decided to separate themselves from the communist organizations.

Ms. Feng, another practitioner, also talked with three young tourists. They asked quite a few questions, such as how the persecution started and about the hate propaganda that the Chinese government had spread against Falun Gong. Ms. Feng answered them one by one.

“Why didn't we know about this before,” one of them said.

“It seems we were brainwashed and thought the Party was good,” another one continued.

“The communist party has even killed people and sold their organs for profit,” said Ms. Feng. “This is too evil,” said another tourist. In the end, they also renounced their membership in the communists' Youth League.

When Ms. Zhang saw a large crowd of Chinese tourists walking by, she did not have time to talk with them one by one. “Welcome to Paris!” she called aloud to them, “Do you know that more than 300 million people have quit the CCP organizations? Please come here after lunch and we can help you withdraw from the CCP organizations here too. You will be blessed and have a better future.”

“No problem. We will be back,” replied one tourist, “Falun Dafa is great!”