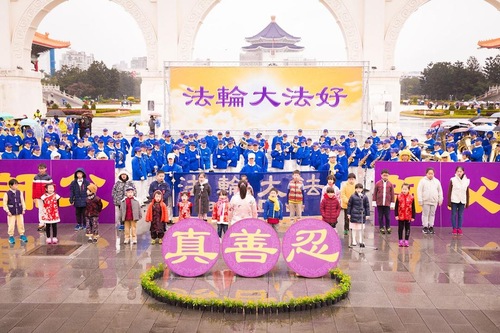 Performances were given by a children's chorus and the Tian Guo Marching Band at Liberty Square in Taipei on February 4, 2018. 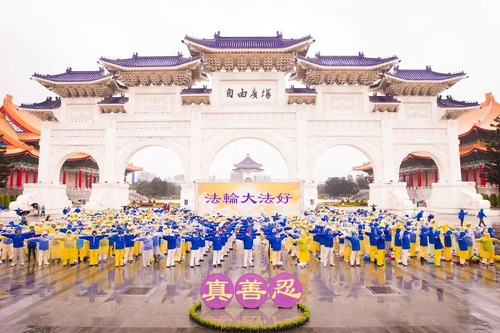 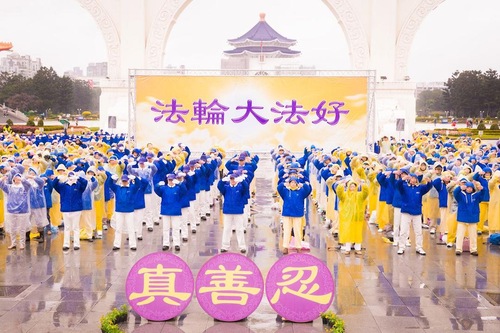 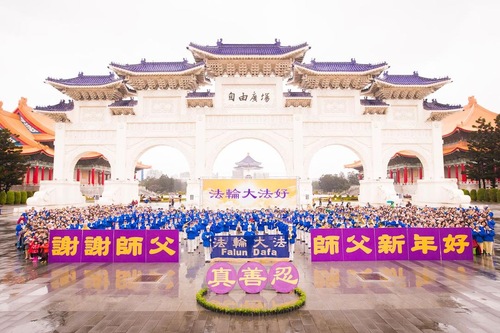 Doing the exercises together to celebrate the New Year and sending greetings to Mr. Li Hongzhi, the founder of Falun Dafa.

Mr. Chen from Malaysia said he had seen similar Falun Dafa activities back in his home country. Five friends who traveled with him said this was the first time they'd ever seen anything like it. “Everything is amazing! And the band's music is awesome!” remarked one of them.

Pedrosa Cedric from Portugal was impressed with the posters set up around the event and asked about it. He had never heard about Falun Dafa before but was glad to see such a peaceful, large-scale gathering. He accepted pamphlets and a DVD about the practice and said he would follow up later.

The event caught the attention of many tourists from mainland China as well. Quite a few stopped to take pictures and videos of the event. Some also read the posters and discussed them among themselves. One tour guide encouraged them to seize the opportunity to learn more, reminding them, “You cannot see anything like this back in mainland China, right?” 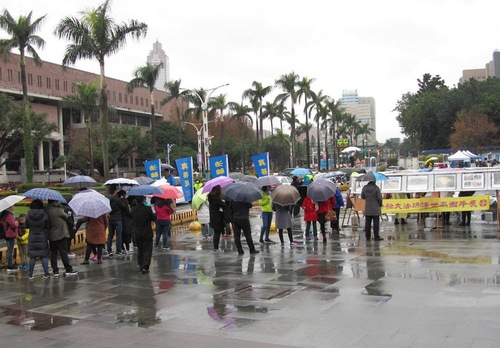 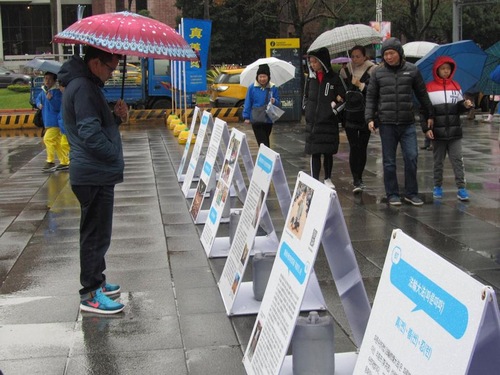 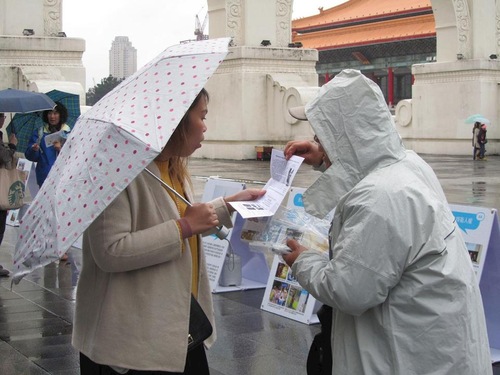 Passersby read posters and talk with practitioners about the practice.

Falun Dafa practitioner Chen Junfu and his wife Huang Qinghui attended the event, bringing along their four-month-old baby. Chen first heard about Falun Dafa from his college professor when he was a sophomore in 2002. Before that, he always felt jealous and resentful but didn't know what to do about it. “The principles of Truthfulness-Compassion-Forbearance helped me a lot,” he recalled. “I was no longer worried and could handle things well in college, graduate school, and at work.” 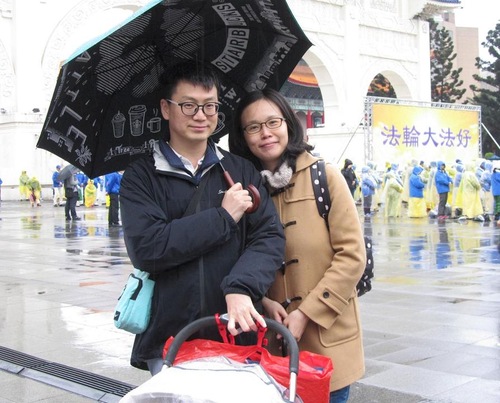 Huang Qinghui and her husband Chen Junfu said the practice improved their health and minds.

Huang learned Falun Dafa in 2003 from her mother. “I was a sophomore in college when my mother recommended Zhuan Falun to me,” she said. Huang said the book and the practice provide guidance in her life, which makes her feel very fortunate, seeing how some of her coworkers seem lost and troubled.

The practice has helped them in their marriage as well. “When we have different opinions, most of the time we look inside ourselves and the problems are naturally resolved,” said Huang.

Yang Huijuan, a graduate student majoring in history at National Chi Nan University, began to practice Falun Dafa because of her mother. “Due to her poor health, Mother often read all sorts of books, from those on qigong and wellness to spiritual philosophy,” she explained. In 1999, a practitioner introduced her mother to Falun Dafa. Out of curiosity, Yang also read the book and found it to be very profound. Shortly after that, her mother's health dramatically improved, further convincing Yang to take up the practice. 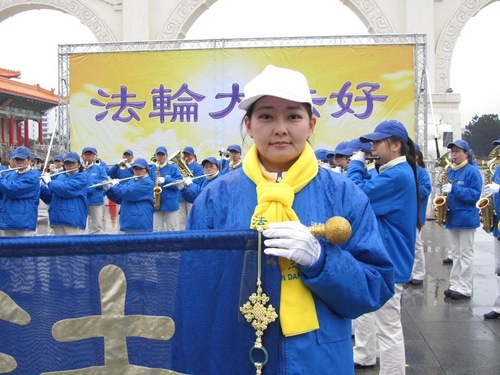 Yang Huijuan, a graduate student in history, heard about Falun Dafa from her mother.

Holding a banner for the Tian Guo Marching Band while walking in the rain and wind, Yang said she did not feel cold. “I am very fortunate to practice the principles of Truthfulness-Compassion-Forbearance. It brings you positive energy and I hope more people can benefit from it,” she said.