(Minghui.org) Falun Gong practitioners in western France held activities in Les Herbiers, Vendée on September 23, 2017, where they demonstrated the Falun Gong exercises and played an audio recording to introduce the self-cultivation practice and raise awareness of its persecution by the communist regime in China.

Local residents signed a petition calling for an end to the persecution, as well as the state-sanctioned harvesting of organs from living practitioners in China. 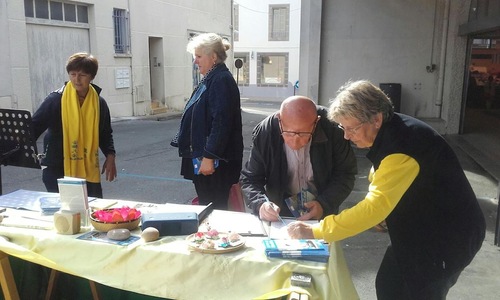 Practitioners in western France introduce Falun Gong to the public in Les Herbiers.

A man studied the photo display at the practitioners’ booth and said that he had done the Falun Gong exercises on and off at home. He wanted to resume his practice after seeing the practitioners at the event. He added, “I didn't know the persecution is so bad and people are killed for their organs! Thank you for coming and telling us!”

A woman named Monique told a practitioner, “I didn't know such a terrible thing exists! It's beyond my imagination!” She made an appointment with a practitioner to learn the exercises.

Mathilde, 85, signed the petition as soon as she heard about the organ harvesting crimes. She said, “I'm not young anymore, and I can't write well, but I will practice writing and write to my assemblyman about it, because what you are doing is important! It's our responsibility to help stop the persecution.”

Another woman named Annette said she wanted to learn Falun Gong. She signed the petition and praised the practitioners' effort to raise awareness of the persecution.

Several people asked for blank petition forms so that they could help collect more signatures to send to their assemblymen.