(Minghui.org) I am 94 years old this year. Twenty-one years ago, I was diagnosed with advanced liver cancer, uterine cancer and ovarian cancer by medical experts from three major hospitals. They told me I only had three months to live.

Doctors did not want to perform surgery due to my age. My children arranged to have me stay at a military hospital for two months, where I received the best medicines available. But my condition did not improve, and I became bedridden.

One of my daughters practiced Falun Gong. She told me that, “Mom, only Falun Gong can save you now.” She related many stories about how wonderful Falun Gong is. “Sounds good,” I said, “But there is not enough time for me now. You go ahead and practice it.” I didn’t believe that anything could save me.

That night, I dreamed that Master Li was cleansing my body. I sat cross-legged in the dream, and Master was pushing my back from behind. When I woke up the next morning, I was able to sit up and my abdomen did not feel as swollen as before. Prior to that, I could only lie on my back due to severe ascites (accumulation of fluid in the abdominal cavity).

I told my son excitedly, “Go and get your sister. Master Li cleansed my body. I want to practice Falun Gong now.”

My daughter taught me how to do the sitting meditation first, since I still could not stand on my own. I listened to Master's lectures every day for a week and practiced the meditation several times a day. Although my movements were not accurate, I was feeling better day by day. Little by little, I was able to get out of bed. I left the hospital after a week.

Several of my children thought I was experiencing a temporary recovery that often comes before death. They took turns taking me to various tourist destinations to try to help me enjoy whatever time I had left. But I just got better and better. They were so surprised that I recovered through practicing Falun Gong.

In the months that followed, I went through what I believe to be eliminations of karma several times. Each time, there were a large amount of blood in my stool. My children who were not Falun Gong practitioners thought I was about to die, and got busy with my funeral arrangements. Only my daughters who were practitioners knew that I was going through karma elimination. After that, I no longer had any cancer.

I thought for a while, then told them, "I am not going to the hospital. I will be fine. I have Master looking after me." Three or four days later, I was back to normal. Since then I no longer have heart problems or high blood pressure.

Soon after that, in a dream, Master told me to drink water from a small clay pot. I followed the directions and started coughing. After coughing up yellow mucus for several days, my long-time symptoms of silicosis went away. I'd had silicosis since I was young due to my occupation.

Years ago, I had an accident at work that resulted in a comminuted fracture in my right arm. I had a metal plate in my arm and a scar that was over a foot long. After I started practicing Falun Gong, the scar disappeared and the metal plate no longer shows up in x-rays.

After seeing the changes in my health, my entire family has a positive view of Falun Gong now, including my two sons-in-law who work in the police department.

One of my daughters was sent to prison for practicing Falun Gong when I was 86 years old. She was severely tortured there. I went to the local police department to ask for her release. I passed out on the way back and was sent to a hospital. I woke up in the hospital and my children told me that I had been there for over 10 hours.

After lots of tests and examinations, I was diagnosed with hemiplegia and Alzheimer's disease. But I insisted on going home. I told them, "I have Master to look after me!" After I returned home, I listened to Master's lectures and did the Falun Gong exercises every day. In a few days, I regained feeling in my body and recovered completely soon after. 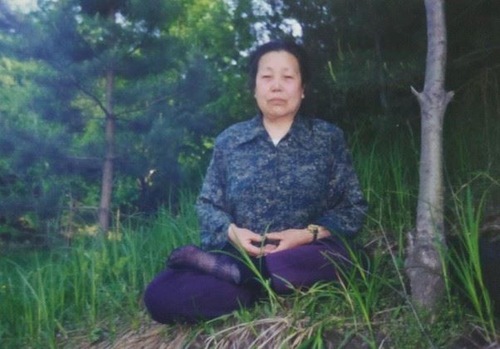 I am 94 years old now and I don't have any illness. I live by myself and take care of myself. It's all because of the power of Falun Gong and Master!