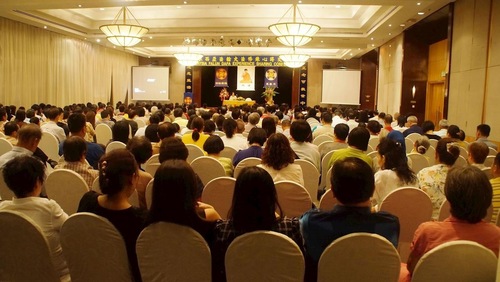 A Family of Seven

Zhuo Yaxiang from Johor began practicing Falun Dafa in 2010. She said she was very grateful for the subsequent positive changes in her health and life.

Having tried other practices previously, Ms. Zhuo had many questions about them that could not be answered. She felt tired and painful all over her body, and had a frequent urination symptom which kept her from sleeping well. She said, “All these problems disappeared after I began practicing Falun Dafa.” Her husband also joined her with the practice. His stomach problems disappeared, and his injured eyes recovered.

Ms. Zhuo recalled, “I used to be very outspoken without paying attention to others' feelings.” She said that Falun Dafa taught her to cultivate speech, and she no longer yelled at her husband or children. Her mother-in-law's epilepsy was a burden for the family because she sometimes lost control of urination and defecation. She sometimes even bumped into things, causing injury and bleeding. Practicing Falun Dafa also improved her health and led to a better family relationship.

Through continued study of the Falun Dafa principles, Ms. Zhuo further upgraded her xinxing. Even when others treated her badly for no reason, she was unaffected, and considered it as an opportunity to improve her mind nature. Similar situations existed with conflicts between practitioners. By looking within herself, she recognized her own attachments and became more considerate of others.

Everyone in her family of seven are now practitioners. Her children also became better kids, and the oldest son sometimes made phone calls to China telling people the facts about Falun Dafa, and debunking the Communist Party's slanderous propaganda.

She said, “More friends and relatives later joined us, and my family has now become a group practice site. We are all grateful for Master Li [founder of Falun Dafa] and we will walk the cultivation practice path well.” 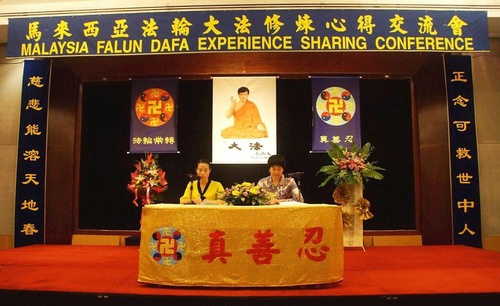 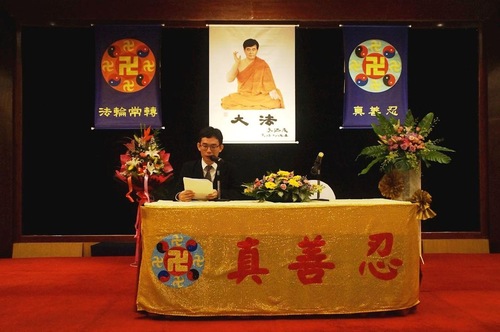 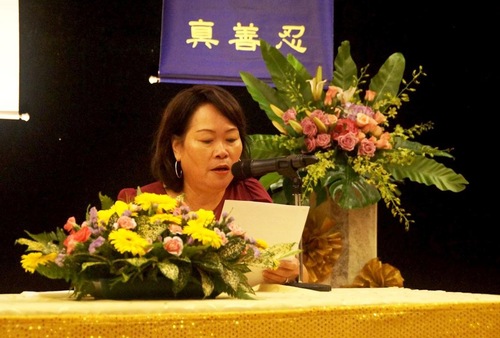 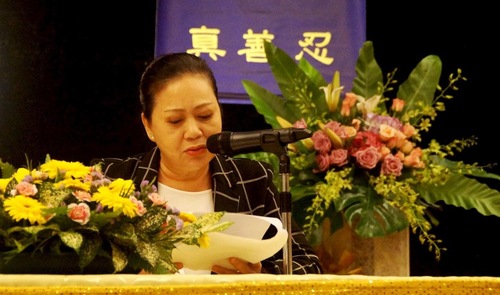 Ruan Guoqing, 72, holds two bachelor's degrees, in journalism and political science. Working as a newspaper editor-in-chief and media association president before retirement, he was strong-minded. In the past, whenever someone told him about the miraculous effects of Falun Dafa on mind and body, he simply dismissed it. After his wife began to practice, within one month both her joint dislocation and diabetes were recovered, but Mr. Ruan was still unconvinced.

Early this March, he had lower back pain and could not sit for more than two hours. While receiving physical therapy, he followed his wife's suggestion and listened to Master Li's audio lectures. He found the teachings interesting and picked up the book Zhuan Falun to read and began learning the five exercises. When he later went to play chess with his friends, he noticed that his legs were no longer painful. Walking upstairs was also easier than before. He said he felt as if someone was pushing him from behind.

Thinking Master had helped cleanse his body, Mr. Ruan decided to try more. He walked from the second floor all the way to the twelfth floor and felt fine. As he walked downstairs, he was also not tired. Because of high blood pressure, he had to take medicine every day and could only do mild exercises. His blood pressure has now stabilized, the lower back pain is gone, and even his eye problems that bothered him for many years have disappeared.

“I am fully convinced Falun Dafa is wonderful. Both my wife and I will tell more people about it,” he said.

Mr. Luo, a middle school teacher from Perak, began practicing Falun Dafa in 2000. I knew it as a way for a better life but did not take it very seriously for a long time. Because of this attachments, he experienced some tribulations and difficulties. Through Fa-study and discussions with other practitioners, he came to understand what genuine cultivation entails. He said, “Gradually I am able to let go of my attachment to comfort and my family environment has also improved.”

Throughout his cultivation practice, Mr. Luo has told people about Falun Dafa so that they are not influenced by the Chinese communist regime's propaganda. Since late last year, he and other practitioners have been clarifying the truth in many places throughout Malaysia. This includes signature collection in support of lawsuits against Jiang Zemin, the former communist leader who banned Falun Dafa. He said, “I noticed that just like what Master Li said in the Fa lectures, many people have changed and are willing to listen to the facts. They agree to sign the petitions and are very friendly with us.”

He said he also learned how to treat others with compassion. “It involves everything we do and everyone we talk to,” he explained, “The compassion does not come just by Fa-study. It also requires us to really cultivate our xinxing.”

Mr. Xie from Kuala Lumpur has practiced for more than ten years. He said, “Falun Dafa brought me many changes—the improvement of my character and helping me return to my original, true self.” He said he also realized the importance of raising awareness of the persecution in China to save people.

By working with other practitioners, Mr. Xie set up a place to help people learn about the brutality of the Chinese Communist Party and help them quit the CCP and its related organizations. “We started from scratch, and every step took lots of effort,” he recalled. He and other practitioners regularly visited an evening market to help people learn the facts about Falun Dafa. After Chinese Embassy interfered, local officials told the practitioners to cancel the event since they did not have a permit.

Knowing that nothing in cultivation practice is accidental, Mr. Xie went to the police station requesting a permit. He asked the officers, “We do not allow communism in Malaysia. Why do we have to do things according to the communist's instructions?” He and other practitioners later continued their truth-clarification efforts at the populated Jalan Alor Night Food Court. One plainclothes police officer came and asked some questions, then left after taking a photo of the banner with the words “Stop the Communist Ideology from Infiltrating Malaysia.” Mr. Xie said he knew the practitioners' righteous thoughts had eliminated the interfering elements.

Ms. Zhou, also from Kuala Lumpur, started practicing Falun Dafa in 2001. She often goes to tourist sites to tell Chinese tourists the facts about Falun Dafa. “I found that it is important to study the Fa well before I go out to tourist sites,” she said.

At the tourist site, Ms. Zhou and the other practitioner usually bring a minivan displaying many truth-clarification posters. When tourists disembark from their buses, they see the posters, which gives Ms. Zhou a good opportunity to follow up.

In addition to tourists, she also paid attention to the tour guides. She said, “I always talked with them, hoping they would not mislead the tourists. It takes time, patience, and effort to change the opinions of tour guides, but we have to do it. From greetings to consistent follow-ups, our compassion will lead them to a new direction.”

After talking with Ms. Zhou, one tour guide understood the real story of Falun Dafa. He said to her, “I will help you.” He took materials onto the bus and announced to all the tourists, “Falun Dafa is really great!” Ms. Zhou said she was very moved by this, “I am glad because this will help the tourists in being saved. I am also thankful for Master' help.”

One tour bus driver had misunderstandings about Falun Dafa and even once beat a practitioner. Ms. Zhou talked with him and totally changed his viewpoints. The driver later began promoting Falun Dafa to the tourists and asked them to quit the Communist Party organizations. “One day I brought a poster that read, 'Have You Quit the CCP?' One tourist said that many people in her family were Party members. She said she could not quit the Communist Party organizations because she had to make a living. I explained to her that in her heart she can separate herself from the regime, and continue doing her work and having her life. The woman agreed and thanked me. So did several other tourists that came with her,” said Ms. Zhou.

She said it is also important for practitioners to look within when encountering problems. “Some street vendors used to treat us badly. I later found out that because they do not understand Chinese, they thought we were telling the tourists not to buy things from them. After we explained to them what we were doing, everything was resolved, and we get along well now,” she added.

Mr. Zhou, 62, reviewed how he helped with truth-clarification work in Malaysia. Three years after he began practicing Falun Dafa, Jiang and the Chinese Communist Party banned the meditation system in China, leaving him not sure what to do. He joined an experience-sharing conference in Singapore in August 2000 and realized that every Dafa disciple should step forward to clarify the truth during the Fa-rectification period.

Based on materials he obtained in Singapore, he and other practitioners produced more for distribution in Malaysia. At first, not many people accepted the materials at the group practice site, so they began clarifying the truth wherever they could: to their families, friends, relatives, and coworkers and in their communities, towns, cities, and states. He said, “Master expects us to do well with truth-clarification. And we have to provide them with the opportunity, so we distribute materials wherever we can, including on the Internet.”

The conference ended at 5:30 p.m. Many practitioners said they cherished the opportunity very much. They also wished Master Li a Happy New Year and expressed hope they could do better in the new year. 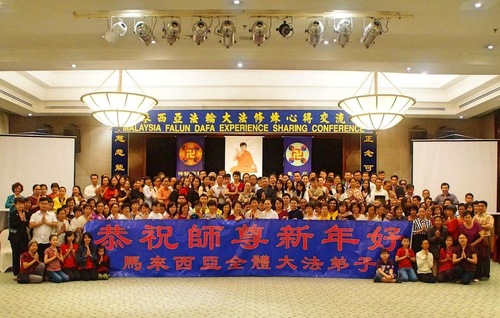 Practitioners gathered after the conference and wished Master Li a Happy New Year.