Ms. Zhong Junfang Sentenced to Over 17 Years for Her Belief

December 11, 2017 |   By a Minghui correspondent in Sichuan Province, China

(Minghui.org) Ms. Zhong Junfang, over 60, is a Falun Gong practitioner in Qianwei County of Leshan City, Sichuan Province. Since the Chinese Communist Party (CCP) initiated its persecution of Falun Gong, Ms. Zhong was detained in a forced labor camp and sentenced to prison three times.

She remains detained in prison to this day, and by the end of her sentence, she will have been in detention for a total of seventeen-and-a-half years. She is emaciated, weighing only a little over 30 kg (66 lbs).

Ms. Zhong Junfang was arrested in 2000 and given two years of forced labor. During the detention, she suffered physical torture and humiliation, and she was deprived of sleep for long periods of time.

Falun Gong practitioners at the labor camp were required to request permission to do anything. Ms. Zhong once approached a guard to request permission to go to the restroom, and her request was rejected. She stood up and tried to go anyway. The guards Dai and Meng Yaling falsely accused her of trying to escape. She was then dragged to an open area and forced to run, resulting in her urinating in her pants and being laughed at.

Ms. Zhong was arrested again in February 2003 and later sentenced to three-and-a-half years in prison. She was detained in Chengdu Women's Prison until August 2006.

After she was released, her phone was tapped. She was arrested again and accused of planning to go to Beijing to appeal for the right to practice Falun Gong. She was again sentenced to three-and-a-half years in prison and detained in the No.2 Ward at Chengdu Women's Prison.

Because she refused to give up her belief in Falun Gong, she was often harassed by guards and inmates. For example, the guards banned her from buying food with her own money card at the prison, which often led to her suffering from hunger. She also had less freedom of movement than the other inmates.

When she practiced the Falun Gong exercises, Ms. Zhong was tormented by the inmates. (Inmates are often rewarded or given incentives to monitor and torture practitioners.) Inmate Zhang Zhongyi beat her badly upon finding her doing the exercises in the cell. Ms. Zhong was bruised all over from the beatings.

A guard once found her doing the exercises after midnight. Ms. Zhong was dragged to the guard's office, cuffed, and hung up at the window, where she was exposed to freezing temperatures of the winter night. The next day she was moved to the hallway and cuffed to the second floor rails. 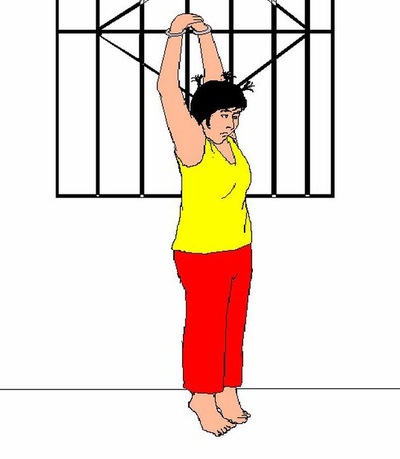 Ms. Zhong started a hunger strike to protest the inhumane persecution. She was carried to the prison clinic and suffered forced-feedings. Her condition became so severe that she had to be put in the prison hospital until she was released.

Yet, she still wrote letters to the guards and officials at the prison to clarify the truth about Falun Gong and to expose the persecution. The guards later directed the inmates and others not to give her any pens and paper.

Sentenced to Eight-and-a-Half Years in Prison

Because she refused to renounce Falun Gong, Ms. Zhong was given only half of the pension allowance she was entitled to, which was not enough to maintain her basic needs. In order to survive, Ms. Zhong sold her small apartment and ran a small clothing store.

Ms. Zhong and five other practitioners, including Mr. Yu Faquan and Ms. Chen Baoqiong, were studying the Fa at her clothes shop when police broke in on the night of August 10, 2011. The officers arrested the six practitioners and took about 100,000 yuan in cash, which was from the sale of her apartment. Mr. Yu Faquan's personal belongings, including a PC, printer, and a CD burner, were confiscated as well. The practitioners were taken to a detention center.

It was reported that Ms. Zhong was brutally beaten by inmate Wan Yonglu. She lost consciousness and was sent to the hospital for emergency treatment. Another inmate, Song Guizhi, put unknown drugs into Ms. Zhong's food. Ms. Zhong has been tortured to the point of affecting her mental clarity, rendering her unable to speak.