(Minghui.org) Today's news from China includes incidents of persecution that took place in 21 cities or counties in 13 provinces. According to this report, 11 Falun Gong practitioners were subjected to mistreatment during their detention, and at least 31 were illegally arrested. 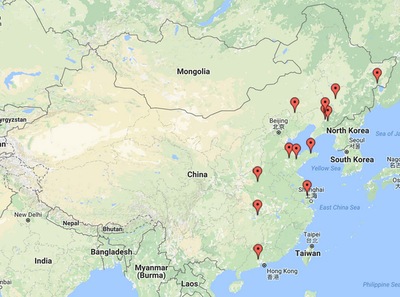 Mr. Sun Pinghua, Mr. Li Runtian and Mr. Long Bingfeng were arrested on October 11, 2016, for suing Jiang Zemin, the former head of the communist regime, who initiated the persecution of Falun Gong.

After 50 days of detention in the Jinshi Prison, they were transferred to the No. 1 Team, No. 6 Ward in Wangling Prison on November 30.

Ms. Yang Yuxiang and Ms. Zhang Fengling were transferred to the city detention center after being held in the Dabailou Detention Center for 15 days.

Mr. Song Yuegang from Xihu District was tried on December 13, 2016. He had been on a hunger strike for 34 days and was very weak. His lawyer asked the court to postpone the hearing, and his request was dismissed in court. The hearing proceeded as scheduled. Mr. Song suddenly collapsed and lost consciousness. The hearing had to be adjourned.

Mr. Sun Hongbing from Changtu County was arrested by Liu Jianxin and Guo Xiaofeng, from the Changtu County Police Department's Domestic Security Division, and officers from the Qijiazi Police Station on December 14, 2016.

Ms. Li Fengzhi was held in the Weizigou Detention Center.

Mr. Yu Shanglin from Linzi District was arrested by domestic security officers from the Jixia Police Station on October 8, 2016 for distributing Falun Gong informational calendars on Chuantai Road, Linzi District. He was taken to the Fujia Detention Center.

Ms. Qin Shujuan from Zhucheng City was arrested on the morning of December 9, 2016, for talking to people about Falun Gong. Her home was ransacked. She is held in the Zhucheng City Detention Center.

Mr. Li Xianghong was arrested on December 12, 2016, for talking to people about Falun Gong. He is being held in the Caojiazhuang Detention Center in Laishan District for 15 days of detention.

Mr. Shi Huatai, 23, was arrested on October 25, 2016 for distributing Falun Gong materials. His whereabouts are unknown.

Mr. Duanmu Junjie was recently arrested at home by domestic security officers. Ms. Wei Xiaoyun was also arrested by Wu Jun and other officers from the Tianshenggang Police Station for distributing Falun Gong materials. Ms. Cao Shuping was arrested, and her home was ransacked.

Ms. He Shuqing from Ruzhou City was arrested by officers from the Domestic Security Division in mid-November 2016. Her computer was confiscated.

Ms. Wang Yufeng, Ms. Yu Xiuxiang, Mr. Fan Mingsheng, Ms. Guo Xiuhua, Ms. Yang Shuxian, and Ms. Shang Yanhua were reported to the authorities and arrested on December 14, 2016, for talking to people about Falun Gong. Officers from the Taiping Township Police Station carried out the arrest. They were taken to the Mishan City Detention Center that evening by Yu Haiying, head of the Mishan City Domestic Security Division.

Mr. Jiang Xuenong from Ongniud Banner was arrested at the home of Fan, which was being ransacked by police officer Xing Xiaomin on December 12, 2016.

Ms. Wu Guimin, 61, was arrested on September 6, 2015 and sentenced to four years in prison on November 4, 2016. Her husband Mr. Liu Zhenjin submitted an appeal to the Baoding City Intermediate Court on December 12, requesting to have her guilty verdict overturned and their confiscated properties returned.

Mr. Liu reiterated the defense lawyers' arguments in support of his wife's constitutional right to practice Falun Gong. He emphasized that his wife had not broken any law, nor caused harm to anyone by practicing her spiritual belief.

Ms. Dong Fenghong was recently sentenced to 28 months in prison; she was arrested on January 26, 2016.

This is not the first time that Ms. Dong has been targeted for refusing to renounce Falun Gong. She was arrested twice in the past, and her latest arrest left her disabled husband and mentally ill son without their sole caregiver.

Mr. Miao Fu was sentenced to 7 years imprisonment in 2012 for refusing to renounce Falun Gong. It's recently learned that the 45-year-old man was tortured on several occasions while serving time at Mudanjiang Prison.

Ms. Cui Yutao was arrested on October 25, 2016, along with five other practitioners. She was released on bail on October 27.

Ms. Cui was arrested again on December 1, 2016, and held in the Datong No. 1 Detention Center. Her arrest has been approved. Her youngest son is just 10 years old and now has no one to take care of him.

Ms. Sun Liping was tried by Xihu District Court on December 1, 2016. One week later, her family learned from her lawyer that the court had reported him to the Xihu District Judicial Bureau for judicial misconduct. The court reported him for defending a Falun Gong practitioner, even though there is no law agains doing so.

Mr. Zhang’s wife is not a practitioner. She tried to stop the police from arresting her husband and was arrested.

Wang Yu, Liu Zhong and Tian Hongling have been released. The others are still held.