Malaysia: Experience Sharing Conference and Group Study Brings Practitioners Together from Across the Country

(Minghui.org) Falun Gong practitioners in Malaysia held a group study and cultivation experience sharing conference in Genting from August 12 to 14. New and veteran practitioners alike mentioned how they treasured the group environment, learning from each other and progressing together in their cultivation understandings. 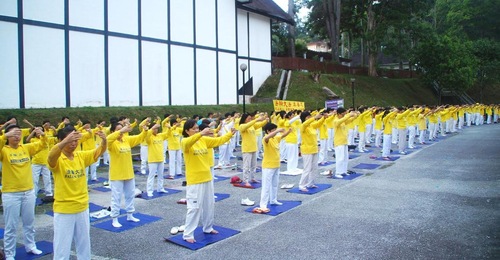 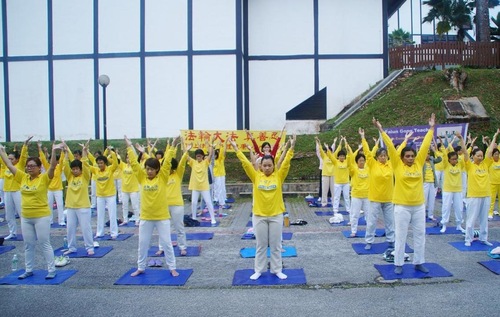 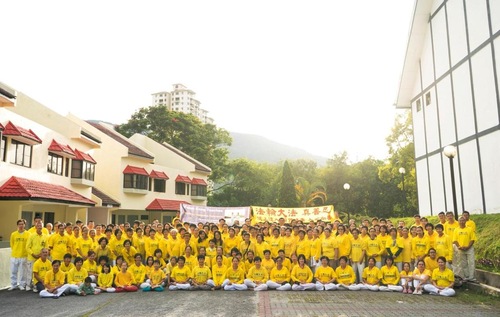 Group photo of those attending the experience sharing conference.

Stepping out to Raise Awareness

Mr. Zhang from Selangor State read Zhuan Falun last year after receiving a hint in a dream. He realized that this precious book is what he had sought for so long. He started practicing immediately thereafter. He treasures the opportunity to cultivate, and spoke of his experiences looking inward, setting strict requirements for himself while letting go of attachments.

Stepping out to raise awareness among Chinese tourists of the practice and the persecution it faces in China was a challenge for Mr. Zhang at first. For example, few tourists seemed to pay attention to the signs he carried; tour guides did not allow tourists to take the informational materials he offered; some tourists thought he was paid to work there.

Gradually he overcame the challenge and kept righteous thoughts to continue going to the tourist sites to talk to people about the persecution. He continues to go regularly, and now enjoys greater success from his efforts.

Luan Ju from Perak State started practicing Falun Gong in 2005. She had heard of Falun Gong’s tremendous healing benefits, and this is what brought her to the practice.

She came to Kuala Lumpur in December 2014 to take care of her daughter-in-law who would soon give birth. There are many Chinese people in Kuala Lumpur. She said, “I was afraid when talking to Chinese people about Falun Gong. I would distribute materials like a postmaster and talk only very briefly to those I met.”

Later, from studying the Fa and reading experience-sharing articles in Minghui.org, she understood the importance of raising awareness. She became determined to step out wholeheartedly to raise awareness.

She began going more regularly to tourist sites with other practitioners. Starting with holding a poster board and sending righteous thoughts, she learned to talk about the persecution and discuss how Chinese citizens should distance themselves from the Party and its misdeeds.

She shared the importance of studying the Fa and looking inward while stepping out to raise awareness. Now her family supports her efforts. Her daughter even drives her back and forth to the tourist sites.

Encouraging Fellow Practitioners to Step out to Raise Awareness

Mr. Zhou has practiced Falun Gong for over ten years. He shared that the overall environment had changed since many practitioners began filing criminal complaints against China’s former dictator Jiang Zemin. Tourists visiting from China seem much more receptive to learning about the persecution now.

Recently Mr. Zhou met a tourist and asked him to sign a petition supporting the lawsuit against Jiang. The tourist declined. Mr. Zhou read the petition to him. He signed right away after hearing the petition was addressed to the Supreme Court in Beijing.

Mr. Zhou shared, “Time is limited. Many people need to be aware of the persecution and the nature of the CCP. We must continue to raise awareness. I entourage all practitioners to step forward and participate.”

Mr. Luo from Perak State has practiced Falun Gong for over ten years. He is a high school teacher. He shared that he initially thought that getting people to sign a petition would be hard as he worried people might misinterpret the effort as anti-China. But after a while, he found it was not difficult.

Mr. Luo said, “Almost all teachers in my high school have signed the petition. I mentioned the global effort to support the lawsuit against Jiang to a retired teacher who taught Chinese. I hoped he would support it. He said, 'I signed it in Kuala Lumpur. I don’t sign many petitions, but I had to sign this one against Jiang. I want him brought to justice!'”

The persecution has led to the deaths of many Falun Gong practitioners in the past 17 years. More have been tortured for their belief and even killed for their organs. Jiang Zemin is directly responsible for the inception and continuation of the brutal persecution.