(Minghui.org) The 17th Celebrate Kirkland Independence Day Parade was held in Kirkland, Washington on July 4, 2016. A total of 81 groups, including the Kirkland Rotary Club and the Kirkland Music Academy, participated in the parade. Practitioners of Falun Gong (also known as Falun Dafa) from Seattle participated in this parade as the only Chinese group and was named the best parade entry. 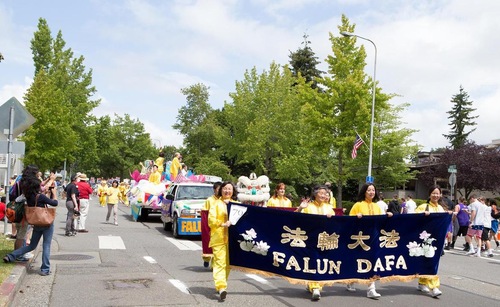 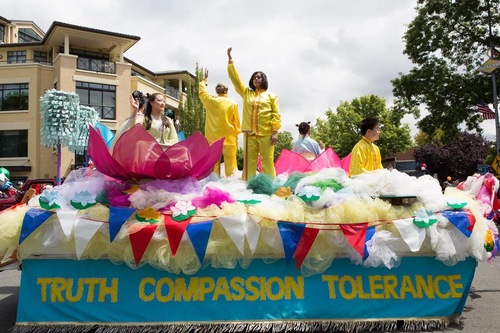 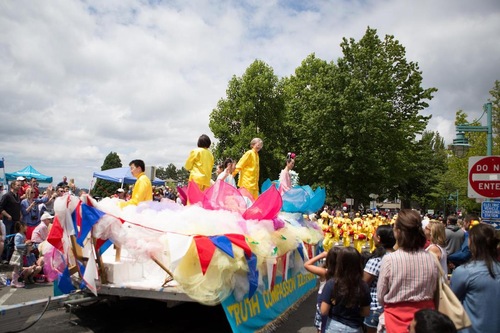 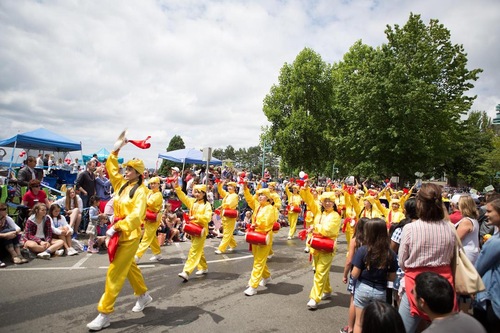 As the Falun Gong procession passed by the main viewing stage, the announcer introduced the group as “a Buddha school practice with the principles of Truthfulness-Compassion-Forbearance. It is practiced around the world.” She read it twice and said, “Is there anything better? Thank you for participating in the parade!”

Some Chinese spectators took photos and applauded warmly when the Falun Gong procession passed by.

Congresswoman Suzan DelBene of Washington State participated in the parade. Her group was just behind the Falun Gong procession. She and five other House Representatives wrote to Chinese President Xi Jinping on June 20 to express their concern about Falun Gong practitioners being persecuted in China, including six who are family members or friends of Washington State residents.

Rep. DelBene co-sponsored House Resolution 343, “expressing concern regarding persistent and credible reports of systematic, state-sanctioned organ harvesting from non-consenting prisoners of conscience in the People's Republic of China, including from large numbers of Falun Gong practitioners and members of other religious and ethnic minority groups.”

The parade lasted one hour and fifteen minutes. One man said to practitioners, “I was so pleased to see your colorful and splendid procession in the parade. Falun Dafa was eye-catching!” A lady said, “I was impressed that every Falun Gong practitioner was smiling from the depths of their hearts!”

Council Member Penny Sweet, the general coordinator of the parade, came to Falun Gong booth and announced that they had been named the best entry among 81 groups. She said, “Your performance impressed people in Kirkland. Two judges and hundreds of thousands spectators had the same voting result.” She added that Falun Gong showed a wonderful message that matches the parade's theme of “It's a small world.”