April 18, 2016 |   By a Falun Gong practitioner in Heilongjiang Province

(Minghui.org) Forty-one people in Heilongjiang Province are currently incarcerated in Hulan Prison, where they are tortured for refusing to give up their belief in Falun Gong, a spiritual discipline being persecuted by the communist regime. 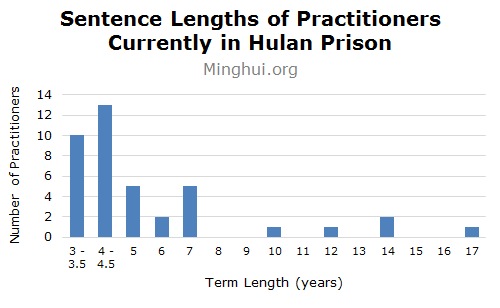 As practitioners first arrive in Hulan Prison, they are placed in the Intensive Training Ward and made to wear special vests as a means of humiliation and to differentiate them from other prisoners.

Guards attempt to force the practitioners to renounce Falun Gong under threat of torture. Mr. Dou Changying was beaten and deprived of water and sleep for refusing to renounce his faith. Mr. Zhang Wenlong was tortured until he became mentally ill. Mr. Kang Changjiang was bedridden for three weeks after suffering savage beatings.

All practitioners in the intensive training ward are made to do forced labor. Guards restricted their restroom use and forbade them from taking showers, doing laundry, and talking to one another. Their meals consist of steamed bread, blanched cabbage, and carrots. They are given water only occasionally.

At night, six practitioners are crammed into a space of 1.5 by 1.5 meters (5 by 5 feet). The filthy, insect-ridden sheets are covered in blood and urine stains.

Unlike other prisoners, who are transferred to other wards or prisons after three months in intensive training, practitioners are kept longer in this ward–some for up to a year. Guards and prison officials receive incentives for “transforming” practitioners, or forcing them to renounce Falun Gong.

Torture Continues in Other Wards or Prisons

After three to twelve months of “intensive training,” practitioners are sent to Daqing Prison or transferred to other wards in Hulan Prison, where they are made to do forced labor for long hours without pay (other prisoners are paid for their labor).

The practitioners are viciously beaten, locked in solitary confinement for weeks, or denied family visits if they are found with Falun Gong literature, doing the Falun Gong exercises, or refuse to follow guards' orders.

In one example, Mr. Zong Zhaoqin was put in solitary confinement for a month for refusing to renounce his faith in front of supervising prison inspectors. Mr. Liu Wei lost a tooth from a beating by guards after he did the Falun Gong exercises. Mr. Zhang Jinku was denied family visits after he mentioned the beatings to his family.

The following are the 41 practitioners currently incarcerated in Hulan Prison and their term lengths: